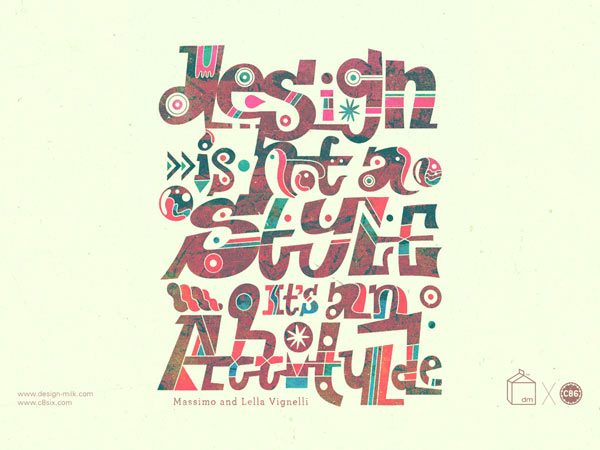 I love Matt Lyon’s work. I’ve been following him since the early 2000s and was thrilled when he agreed to do a desktop for our Designer Desktop series. I was even more excited that he decided to illustrate a Vignelli quote because his work mashed up with the Vignellis’ words make a nice juxtaposition!

Matt says of his design:

I was reading about the Vignellis and having known their work was reminded of their more functional aesthetic and Massimo’s ‘The Vignelli Canon’. The quote is true to their ideology, but when read in isolation it struck me as much as a celebratory statement as a manifesto for action or change. It’s quite punk. I can imagine Vivienne Westwood advocating the same expression in her ‘SEX’ boutique during the 1970s. Attitude encompasses more than the whims of fashion, it embodies purpose and asserts meaning.

“Design is not a style, it’s an attitude.” – Massimo and Lella Vignelli