The Present Moon: A Lunar Clock with a Unique Take on Time 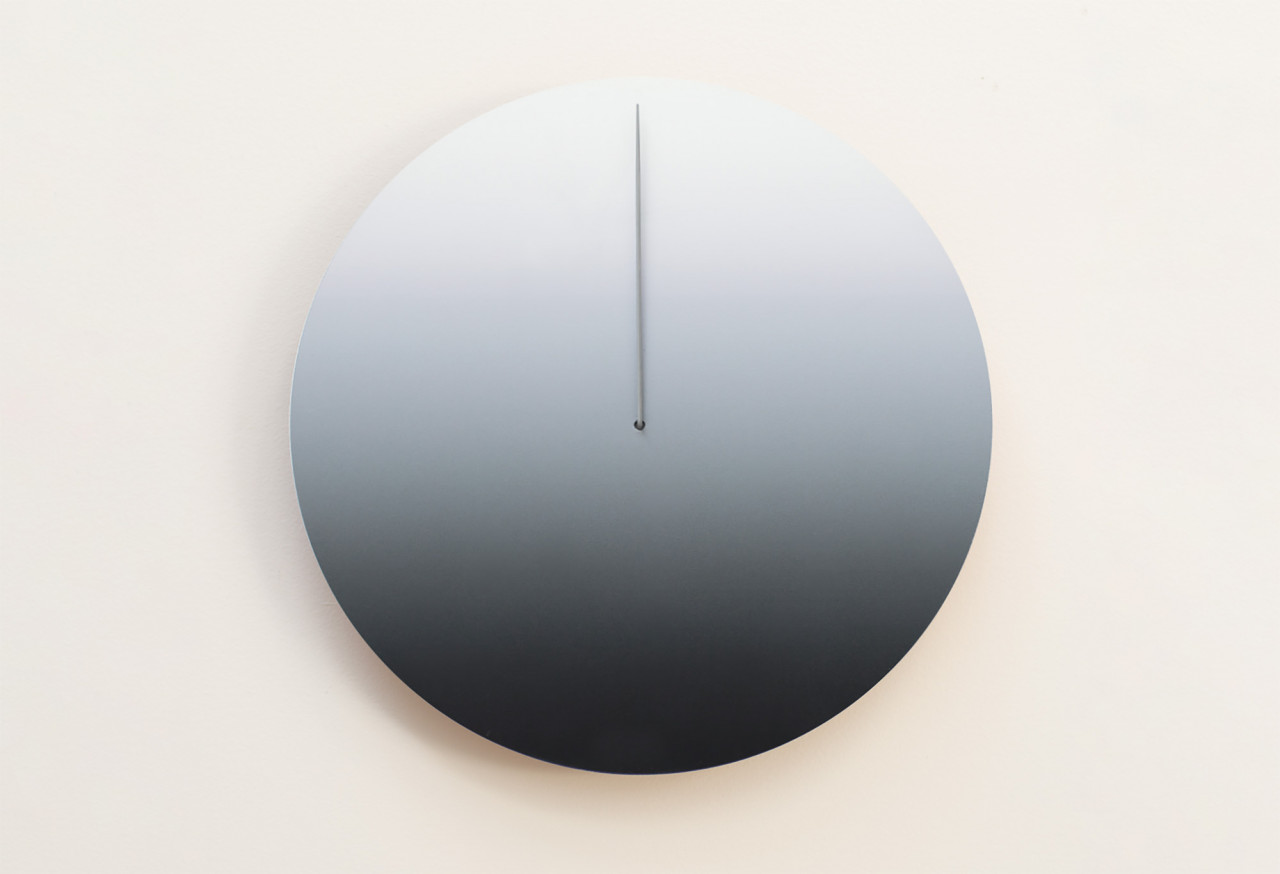 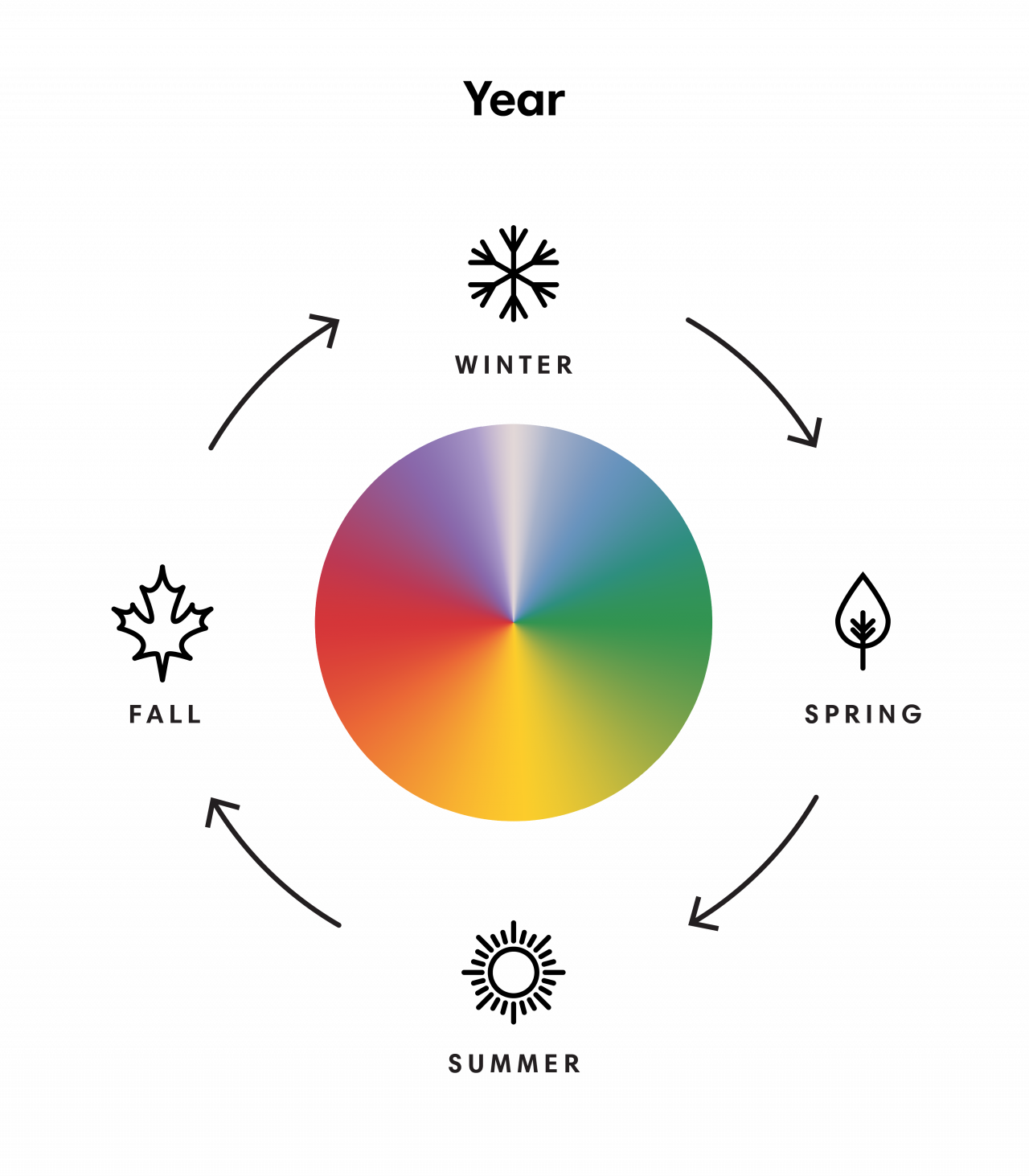 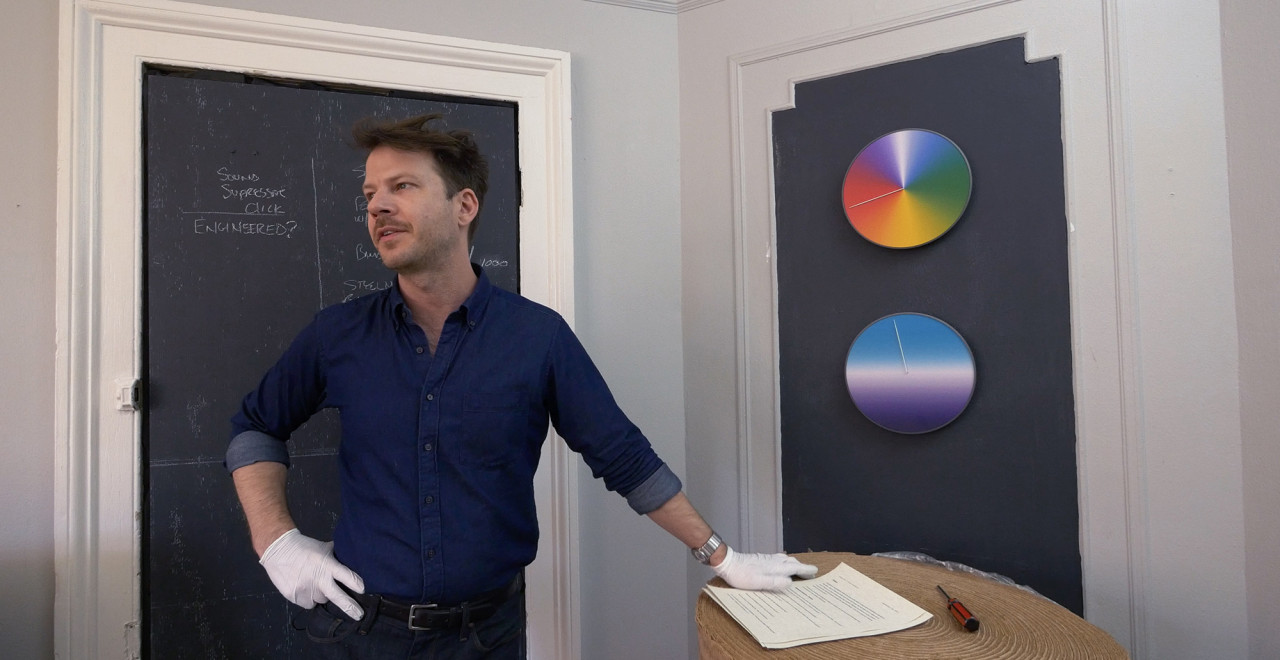 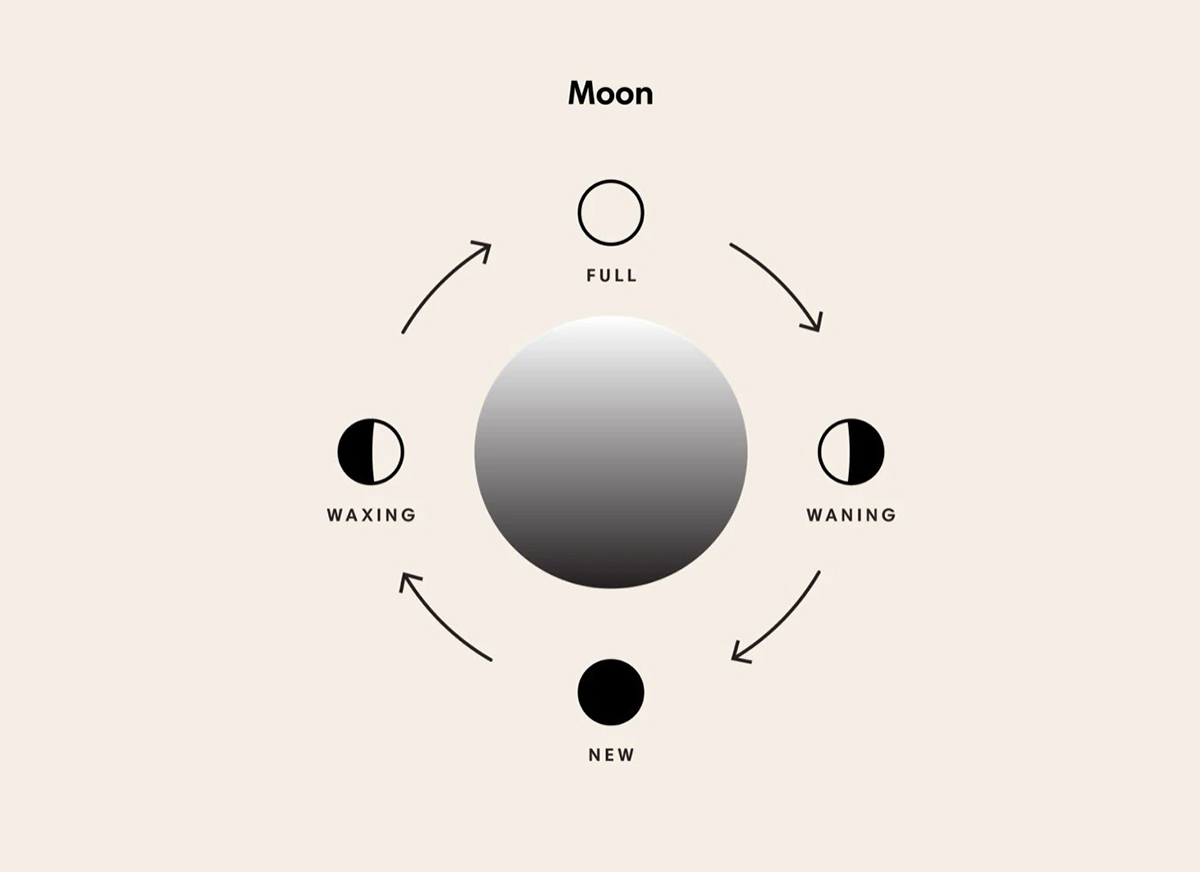 The Present Moon: A Lunar Clock with a Unique Take on Time
1/9 Photos

It’s not too often someone steeped in the collaborative film industry pivots toward a more measured and solitary practice such as horology. Drawn to the parallel between filmmaking and timekeeping, media artist Scott Thrift’s novel perspective reimagines the passing of time graphically and at a more measured rate guided by the orbit of the moon – an effort represented in a trilogy of wall clocks now in its final installment.

Forgoing universally accepted measurements of seconds, minutes, and hours, Thrift has returned to more elementary and primal indications of time’s flow: seasonal, circadian, and lunar changes. Thrift’s third and final clock design, The Present – Moon, reimagines the passing and recollection of time through the waxing and waning of the lunar body – a monochromatic gradient timepiece with each rotation marking a new lunar cycle.

To me the hand is the coolest design element about Moon. Against the foggy gradient from shadow to light the hand that floats above the face is powder coated in 50% grey. 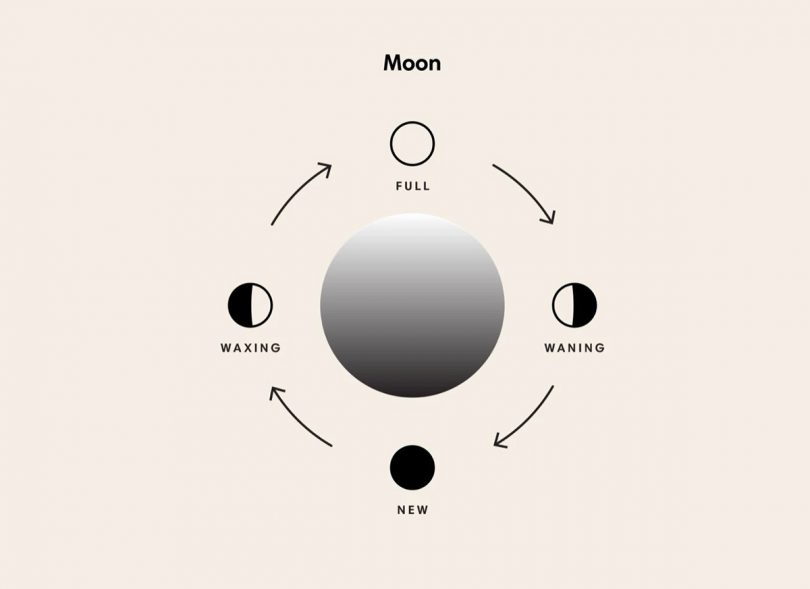 “The Present — Moon began with the design challenge of bringing the ancient yin-yang symbol to life in time,” says Thrift, “For a symbol about the interconnected oneness of all things, the tachi has heavy binary / black and white edge details that make its message clear with a ferocity that made it one of the first examples of human writing on bones. I wanted to bring the brand of yin-yang some relief as it has to carry a lot of cultural weight.”

Thrift’s previous two clocks explored alternatives to timekeeping in the form of The Present – Year, an annual timepiece documenting the passing of seasons, and The Present – Day, a 24-hour timepiece that removes numbers for a gradient-like spectrum representing the entire day, balancing dawn, noon, dusk, and midnight.

The final installment The Present – Moon takes on a similar graphical, gradient approach to timekeeping as its two previous predecessors, a clock that may share the appearance of other minimalist, color coded timepieces, but representing the flow of time at increments with a significantly different perspective. As the hand moves up to signify the Full Moon, the 50% grey hand appears dark against the light background. As the hand reaches the bottom of the face signifying the darkness of the New Moon the same hand appears to be bright. Every two weeks the moon oscillates between a full moon and new moon, represented by the hand of the clock slowly transforming from light to shadow, and back again.

We asked Thrift for some additional details about his unique take on time.

How did you engineer the accuracy of a lunar cycle clock to coincide with the waxing and waning of the moon?

This project is about partnering with excellent vendors. Besides collaborating with CW&T on these models, I’m also continuing my partnership with the German engineering team that developed and manufactured the 365.24 day movement in 2012 and the 24-hour movement in 2016. I have one of their movements from 2012 and it works fine so I am keen to partner with them again.

The lunar movement will be a newly commissioned state of the art mechanism by the same firm. Development is on hold after we came to the fork in the road. Is there a way to engineer the existing annual movement to become a lunar movement or does it make more sense to build a new movement from scratch? Maybe it’s possible to have the Lunar Movement Auto-Set functionality like the annual movement? Which all leads to the question from them,  “How many do you want to make?” I won’t be able to answer that question until this campaign is over. 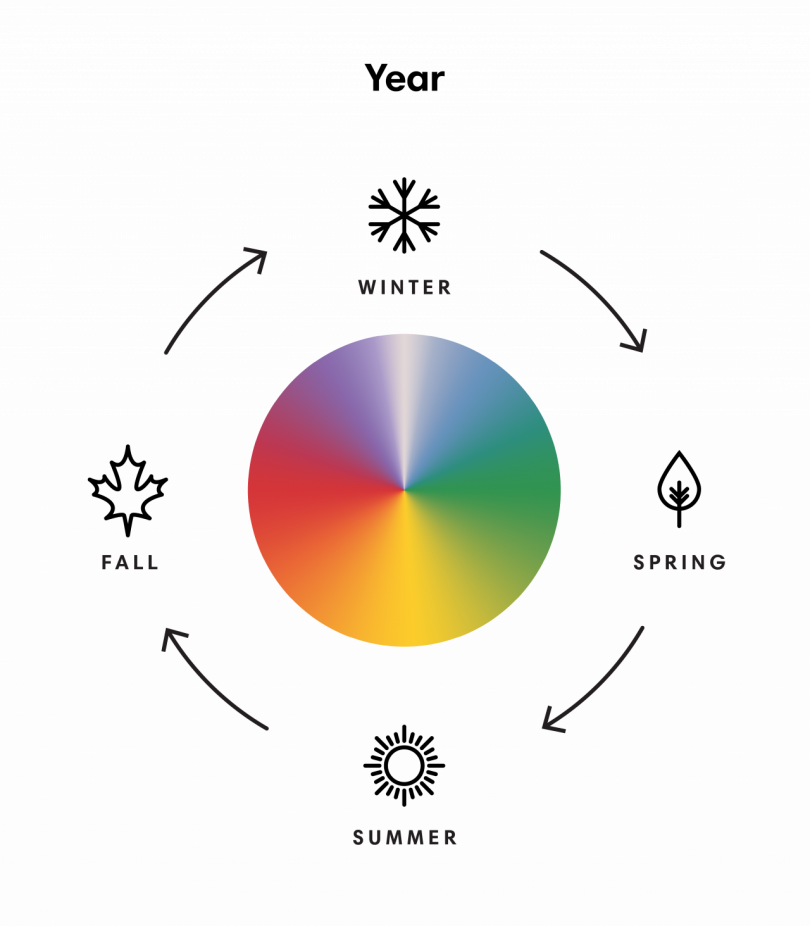 How has working on this trilogy changed your own perception of time?

Making the The Present – Year timepiece provided context for time that helped me see myself and everyone else as a part of Earth’s seasonal cycle. The sensation of time enrichment it offered inspired me to create a companion piece with the Day to enable a more holistic, numberless appreciation of a single day. Bringing the Moon piece to life will complete the set by providing a localized vision of our immediate surroundings in the cosmos.

Before, I was limited to imagining time as little more than the narrow, industrial abstraction of seconds, minutes, and hours. There is more to time than modern time is capable of expressing. The industrial method of time keeps leaving us time starved in the face of abundance. The Present feels to me like a method of time giving that it provides life with the appropriate degree of context. 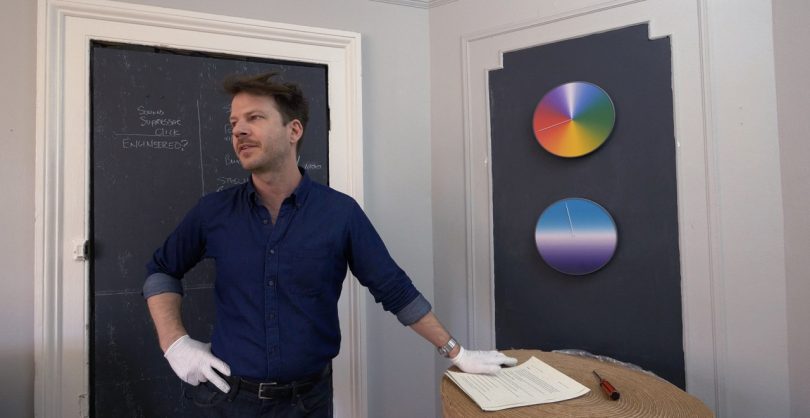 Media artist and designer, Scott Thrift with two of his previous wall clock designs, The Present Year (top) and The Present Day (bottom)

The Present – Moon launched July 20th over at Kickstarter, which coincided appropriately with Moon Day, the anniversary of the lunar landing.