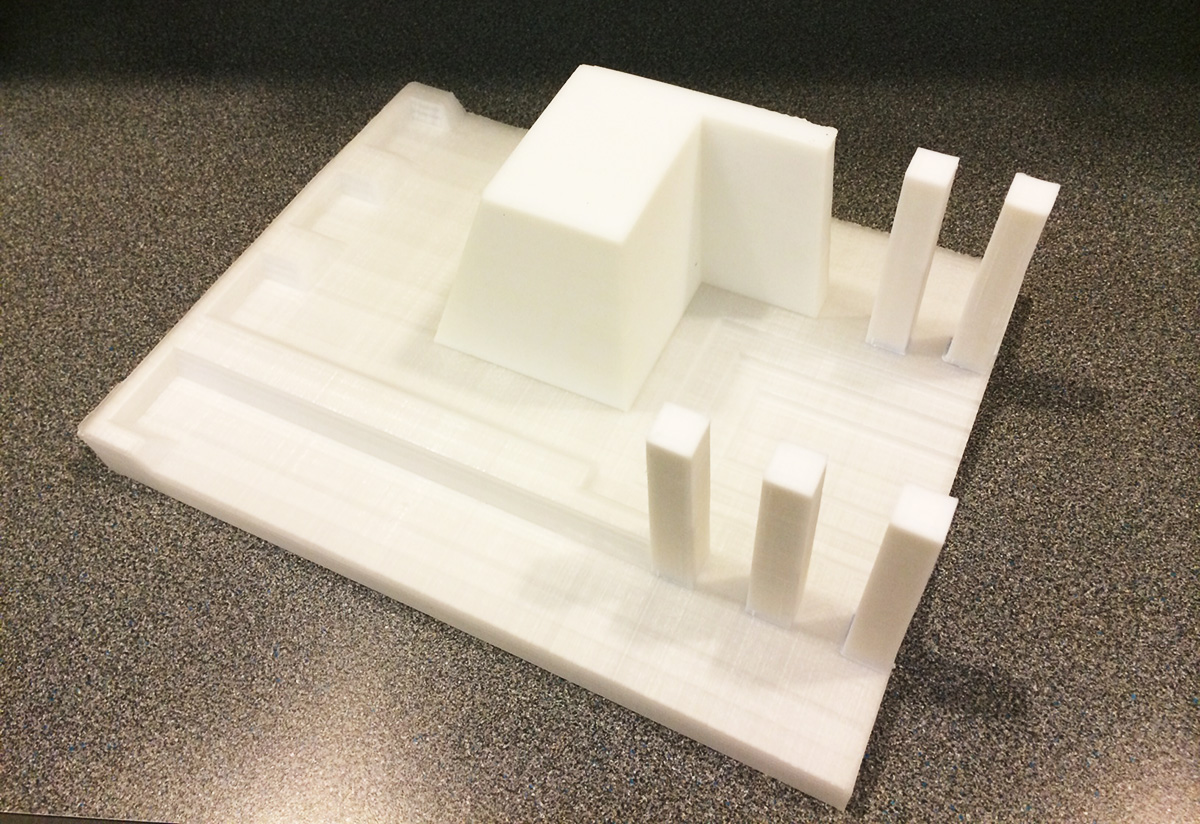 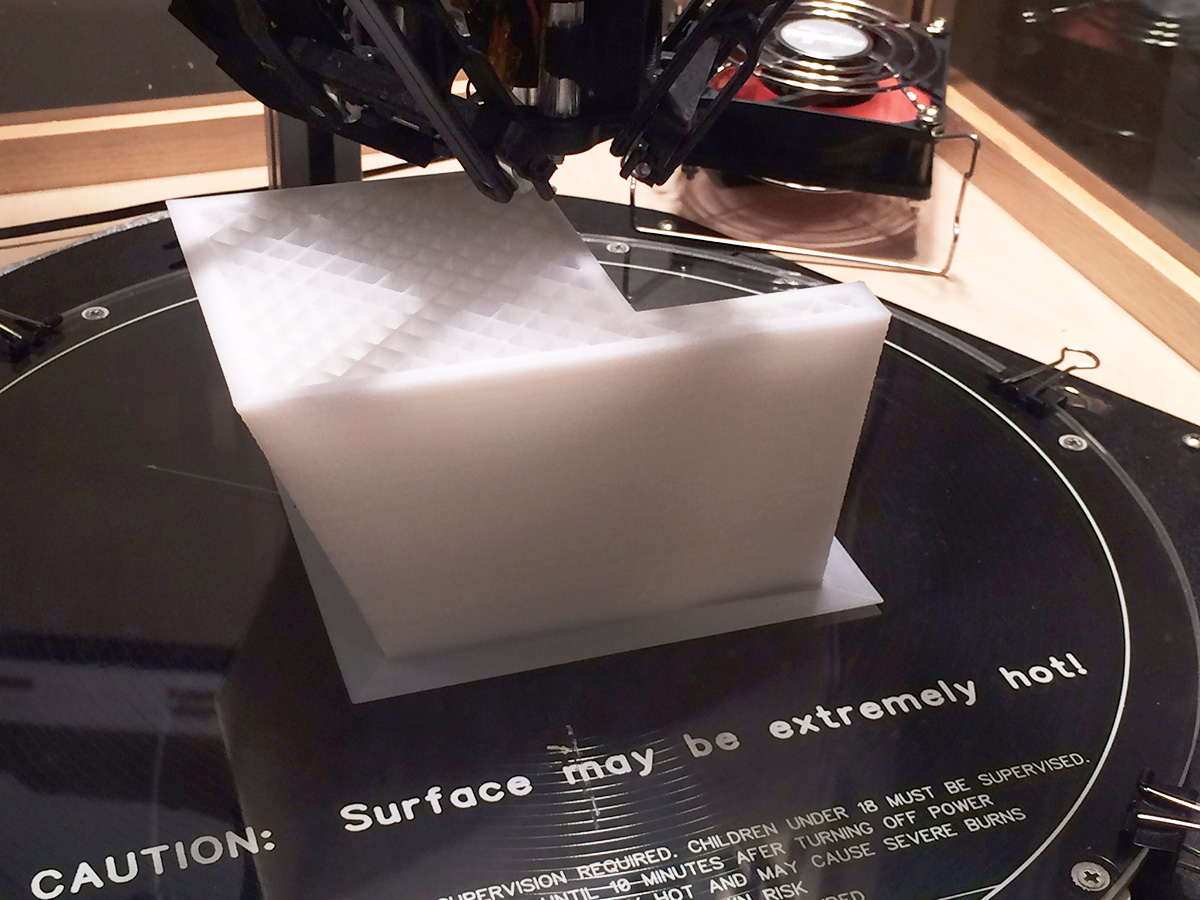 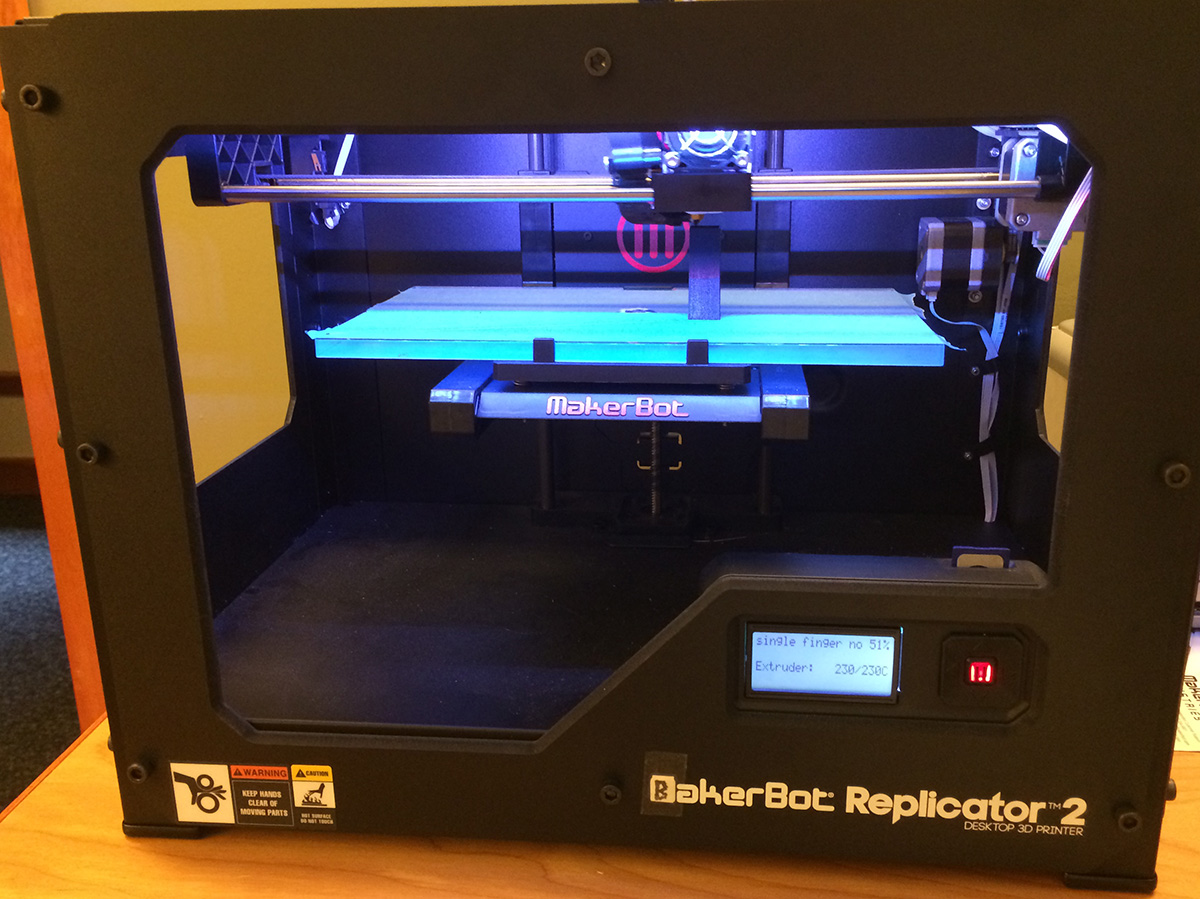 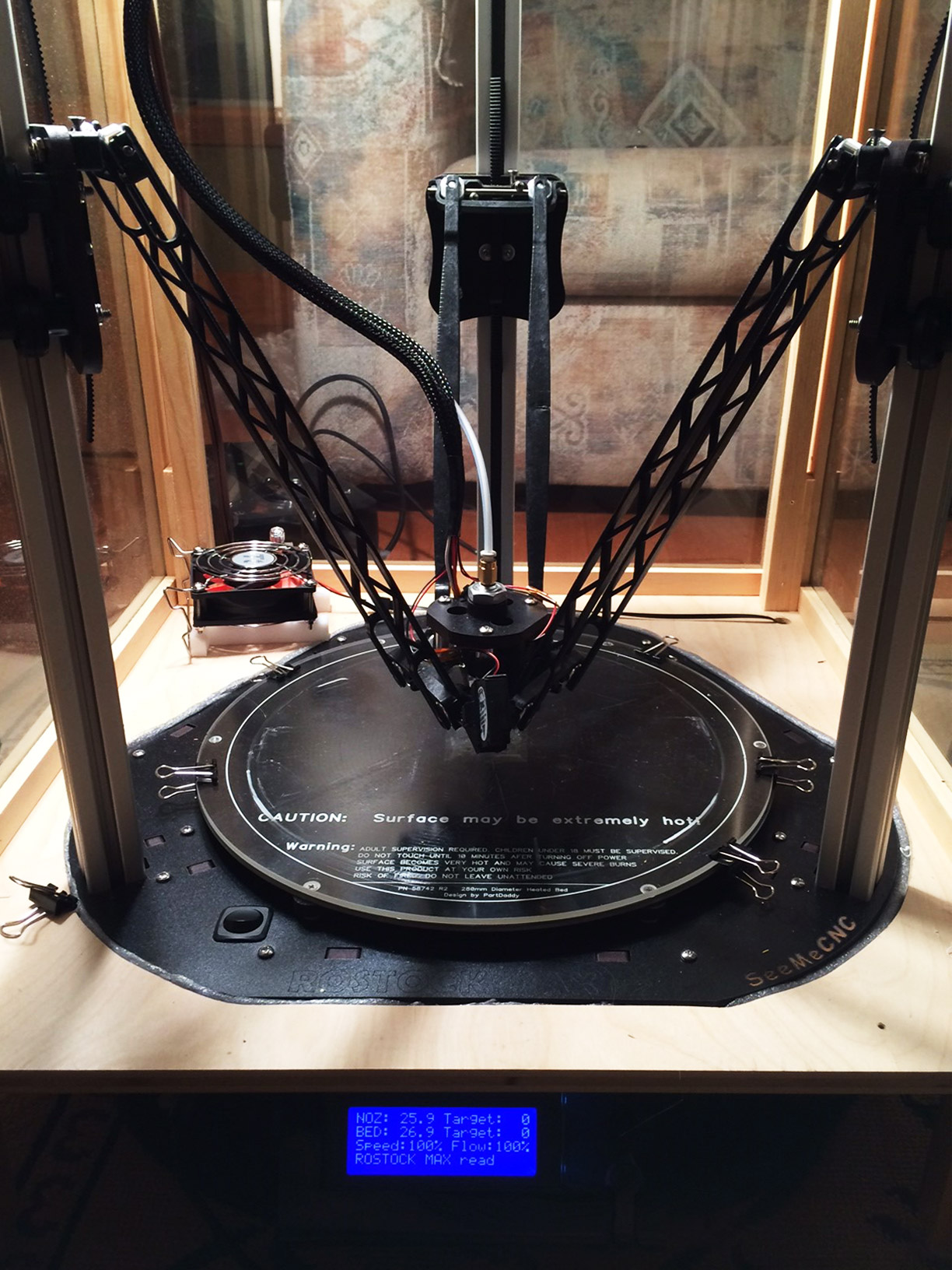 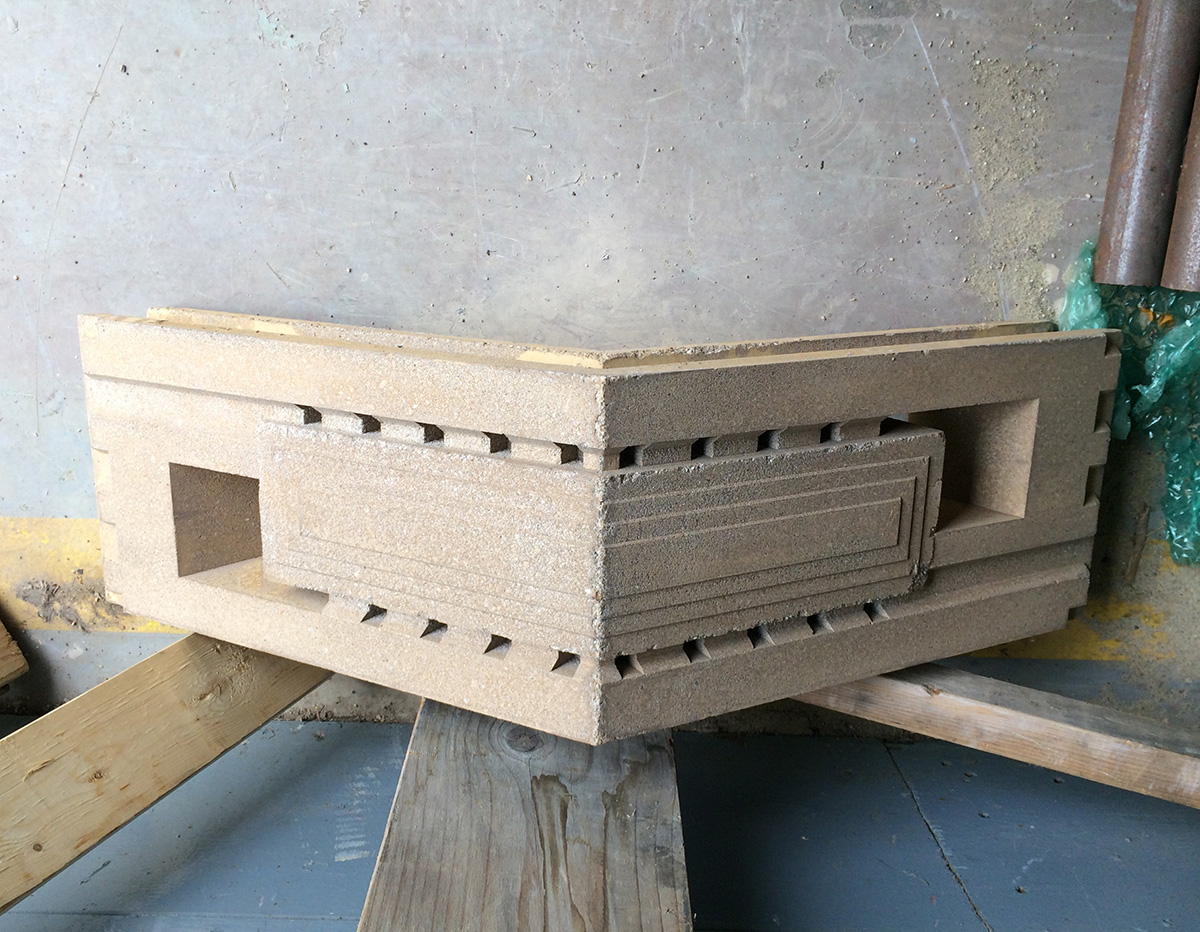 An overall view of the Makerbot Replicator 2 printing one of the “fingers” for the perforated textile block molds.
4/6 Photos

A detail of the print bed of the Rostock Max V2 3D printer.
5/6 Photos

Outside corner perforation block made for the west wall of the AP Chapel.
6/6 Photos

Did you know the largest architectural enclave of architect Frank Lloyd Wright’s work in the world is located on a Floridian college campus? Collectively known as the Child of the Sun, all twelve buildings on the campus of the Florida Southern Colleges were designed by Wright as a “harmonious whole expressing the spirit of the college free from grandomania”. And now, decades later, 3D printing is helping preserve this National Historic Landmark to the standards and original vision of its architect.

The Annie Pfeiffer Chapel is perhaps the grandest of all the structures, the first building built on the campus property, constructed using Wright’s signature textile block building system. Utilizing student labor between 1938-1941, 6,000 tapestry blocks decorated into 46 unique designs were cast from sedimentary rock (coquina) and concrete, then pieced together to form the building’s signature textile block jewel box exterior. 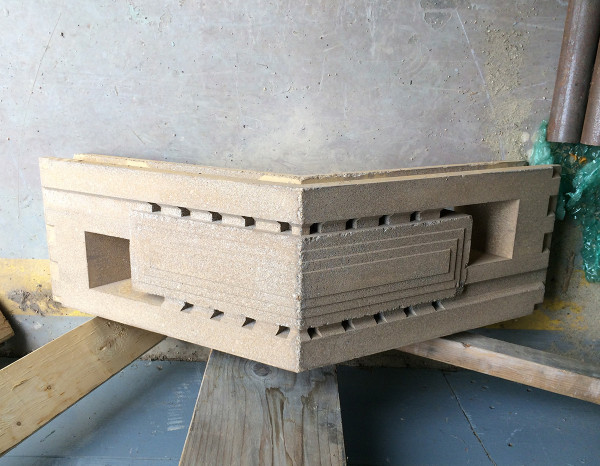 Outside corner perforation block made for the west wall of the AP Chapel.

Unfortunately, like many Lloyd Wright’s cement block structures, over time the handmade blocks began to deteriorate from weather and age (close-up of deterioration here). The cost to recast Wright’s blocks by hand proved prohibitively expensive in the past…until the arrival of the affordable 3D printer. 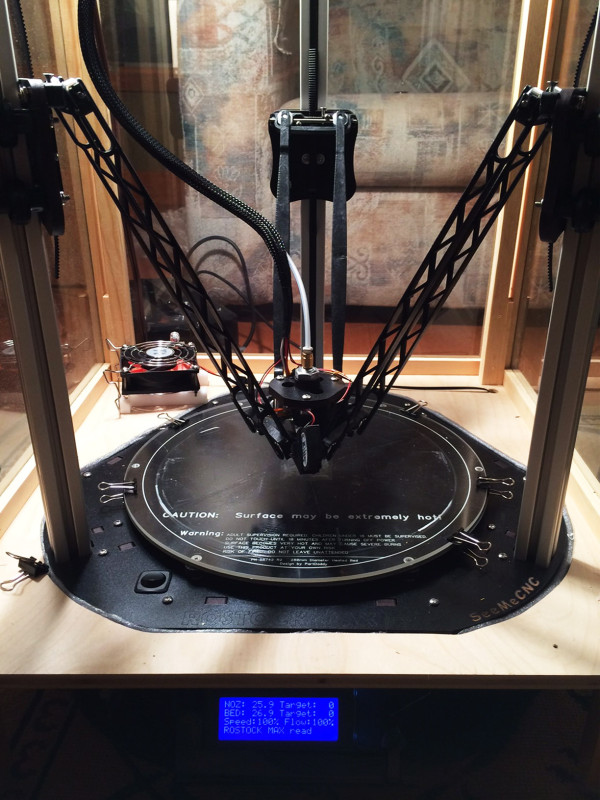 A detail of the print bed of the Rostock Max V2 3D printer.

Thanks to a $50,000 grant from the Florida Division of Historical Resources and the emergence of affordable 3D printing technology, the Annie Pfeiffer Chapel was recently restored in exacting architectural detail. Architect Jeff Baker of Mesick Cohen Wilson Baker Architects oversaw the 12-month grant project, turning to the aid of 3D printers to replicate and replace what was once a tedious manual process. 3D printing significantly reduced both cost and effort to complete the architectural restoration, allowing Baker’s team to integrate 2,000 distinctive colored glass tiles into Wright’s original design textile blocks, recreating the jeweled box effect envisioned by the architect. 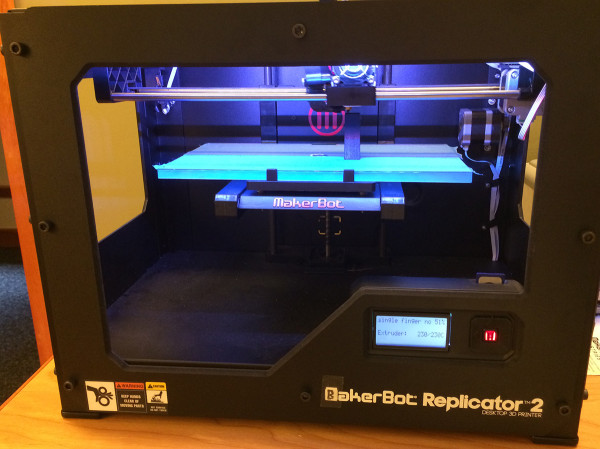 An overall view of the Makerbot Replicator 2 printing one of the “fingers” for the perforated textile block molds.

“The success found on this project is a milestone not only in the restoration of Frank Lloyd Wright buildings on the FSC campus but also for similar textile block projects designed by Wright and other architects throughout the nation.” – Jeff Baker/Mesick Cohen Wilson Baker Architects 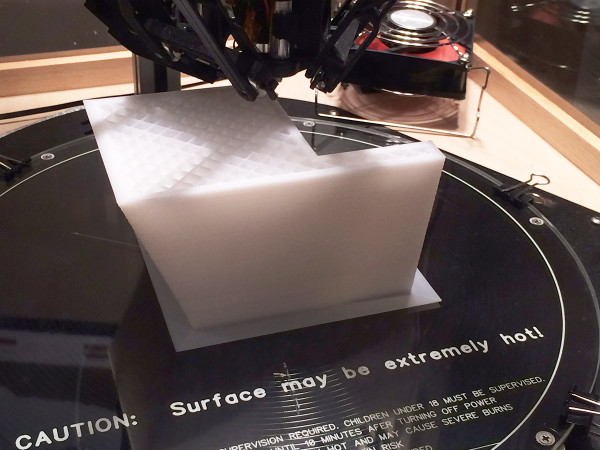 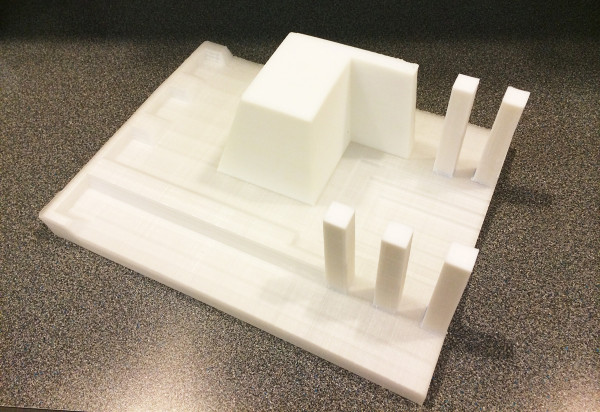