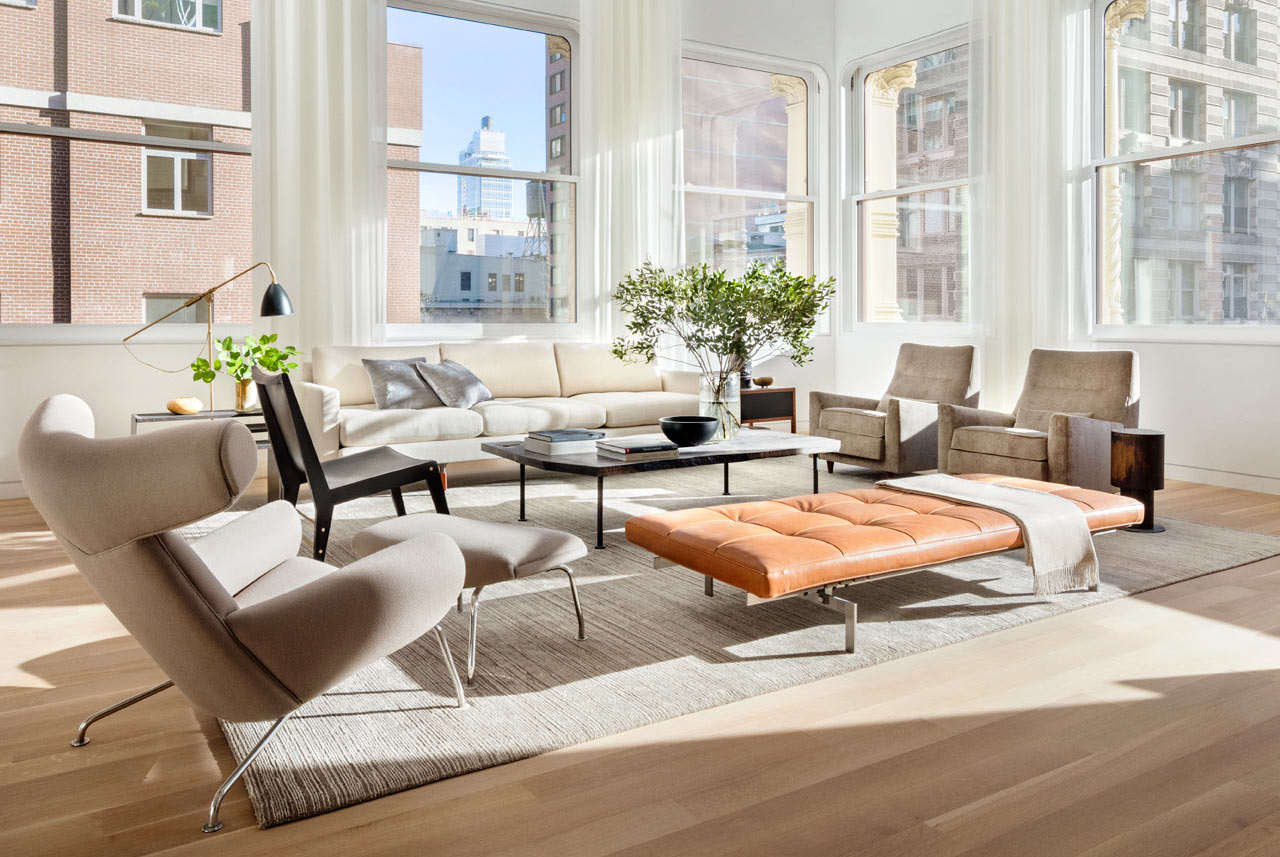 Cast Iron House at 67 Franklin Street in New York City was built in 1881 by James White. It’s one of New York’s most notable cast iron buildings, an architectural style that immediately elicits 19th Century New York design. The building features an astonishing neoclassical façade, rising six stories over which the intricate ornamentation shifts subtly from one floor to the next. 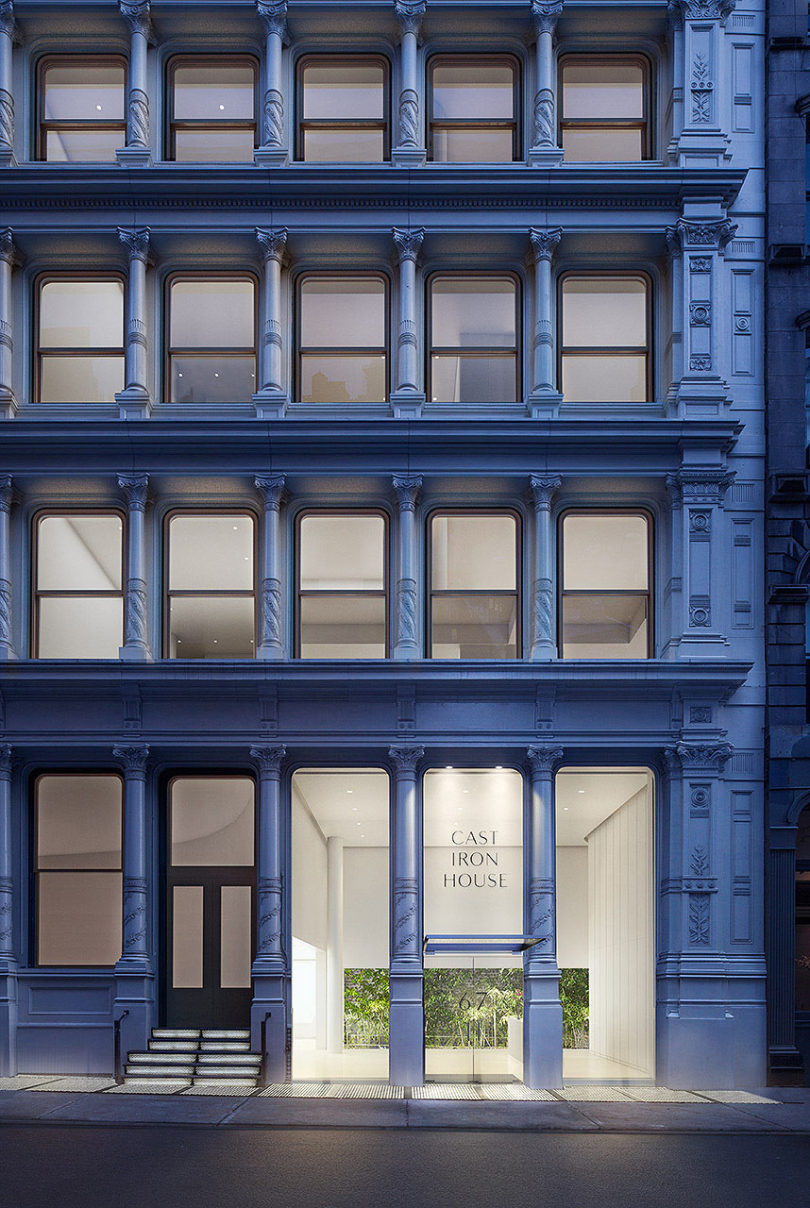 In 2014, Japanese master architect Shigeru Ban oversaw a complete renovation of the building in which he preserved and restored these historic details whilst modernizing the interior volumes and adding two glass and steel penthouse units that offer the finest in contemporary luxury living. 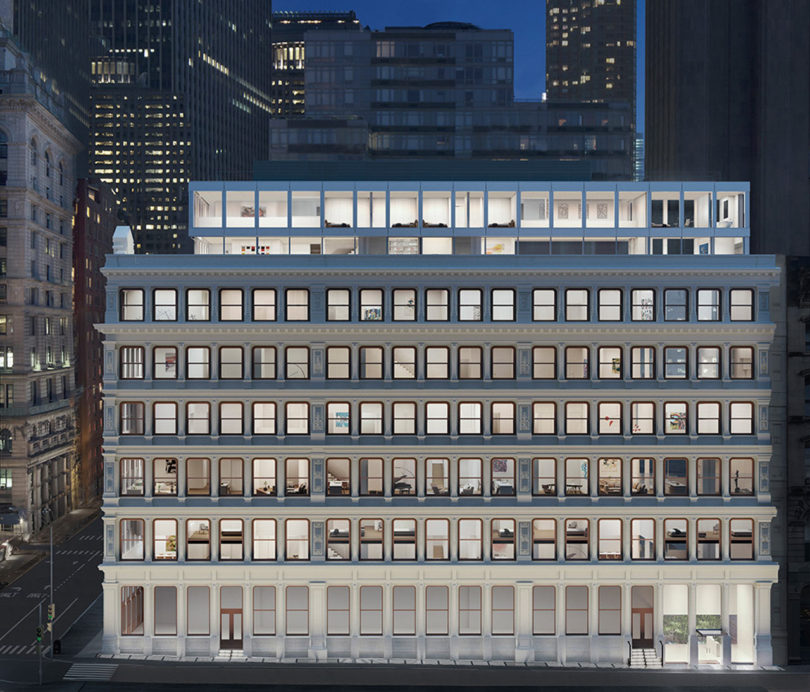 Ban later said of the penthouses: “I wanted to articulate it as totally different from the existing building.” Indeed, constructed with a restrained and minimalist aesthetic using steel and glass, the penthouses seem to hover above the building itself. Both these units feature long, telescoping walls that allow the interior and exterior spaces to flow together, further adding to their sense of airy volume and light from which to enjoy views of the historic neighborhood of TriBeCa. 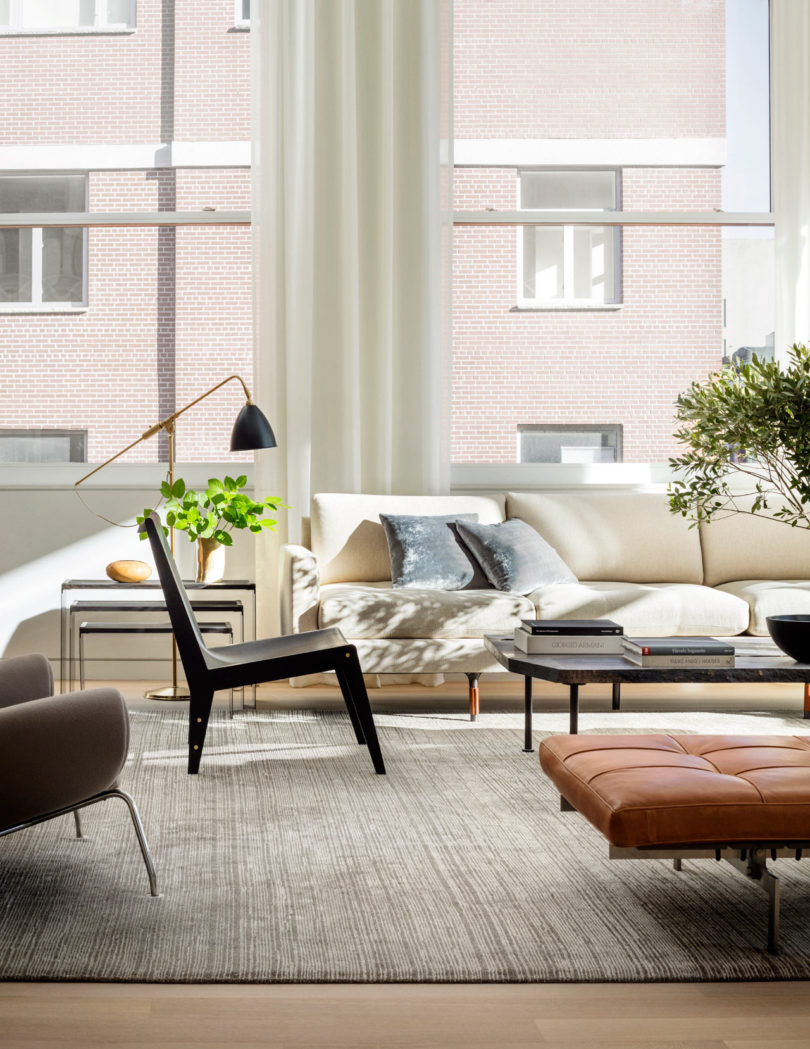 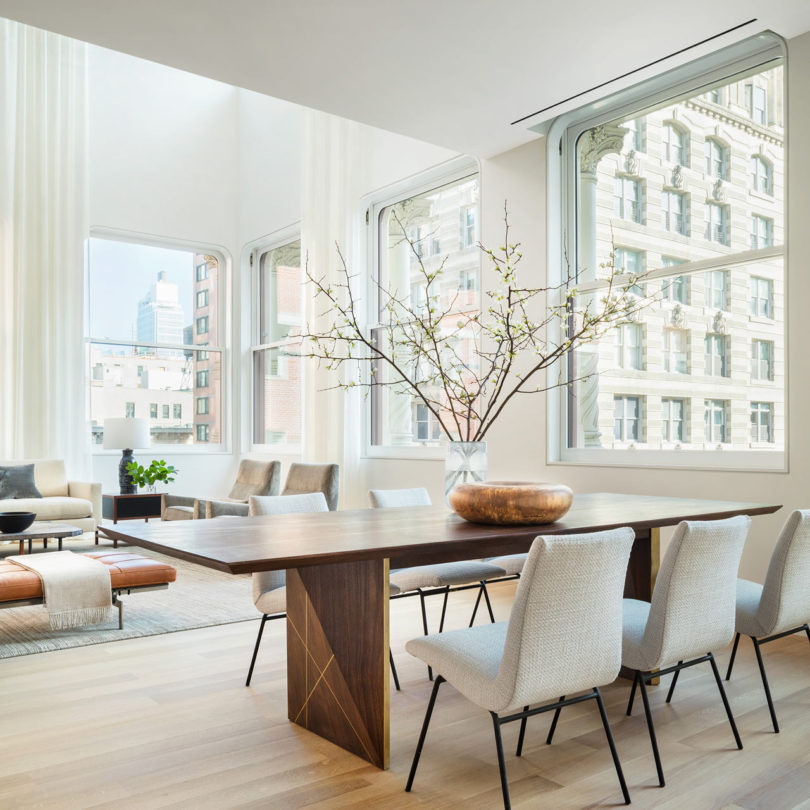 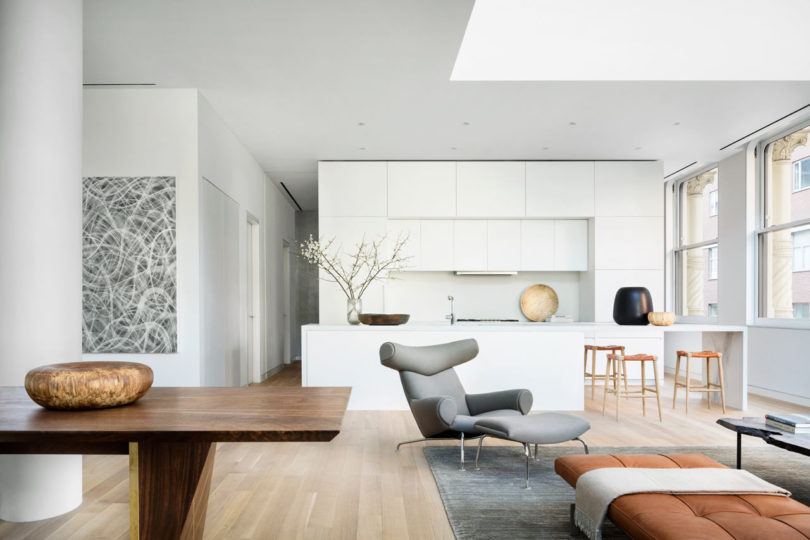 To dive deeper into the significance of these homes, we caught up with Brad Ford, the interior designer who finished the model apartment for this remarkable building. Ford’s visionary work perfectly compliments Shigeru Ban’s modern aesthetic and his appreciation for traditional arts and crafts.

Ford arrived in New York from his hometown of Russellville, Arkansas to begin his design career with studies at FIT. “I was pretty nervous moving from Arkansas to New York,” Ford admits. “Then I got here and literally within the first couple of hours I thought to myself: ‘Okay, this isn’t that bad. I can figure this out.’” 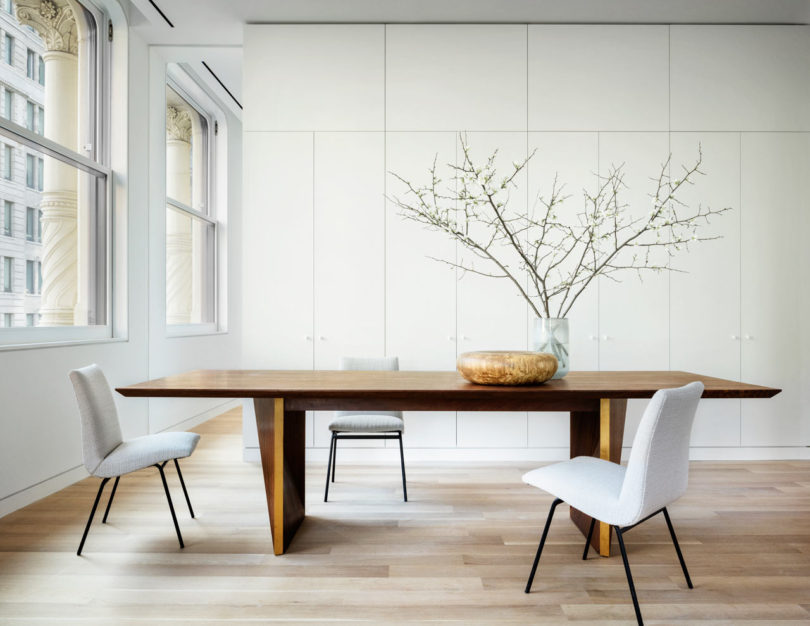 We’re living in a culture of instant gratification…But sacrificing time often requires sacrificing value and quality. People are realizing this and looking for something more lasting…. people have started to value experience over possessions. 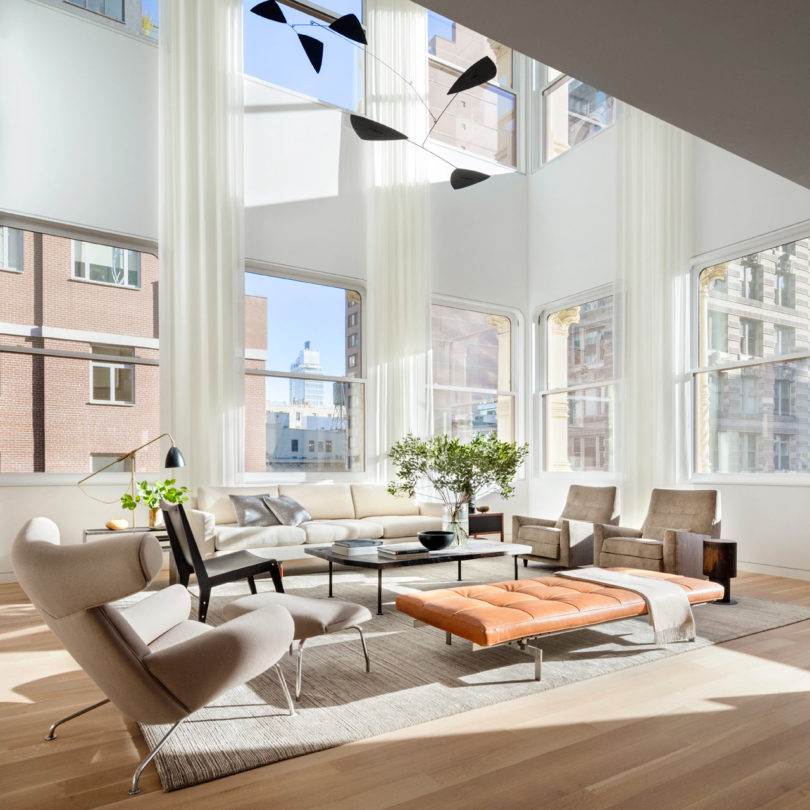 Out of college, Ford earned his professional stripes working for the late Jed Johnson and, later on, Thad Hayes. “They each had a very understated aesthetic and I learned from both of them the importance of balance, scale and proportion,” Ford said. “Joe D’Urso was also one of my favorite designers,” Ford continued. “I remember reading a quote from him once about the difference between decorating and design. He said: ‘… decoration is all about addition, while design is more about subtraction.’ I loved that idea and I believe Jed and Thad both subscribed to a similar theory.” 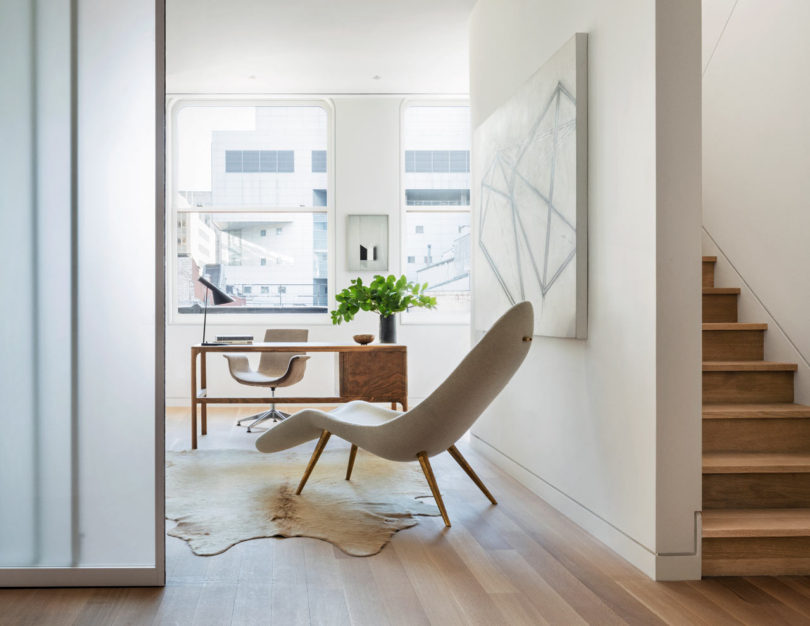 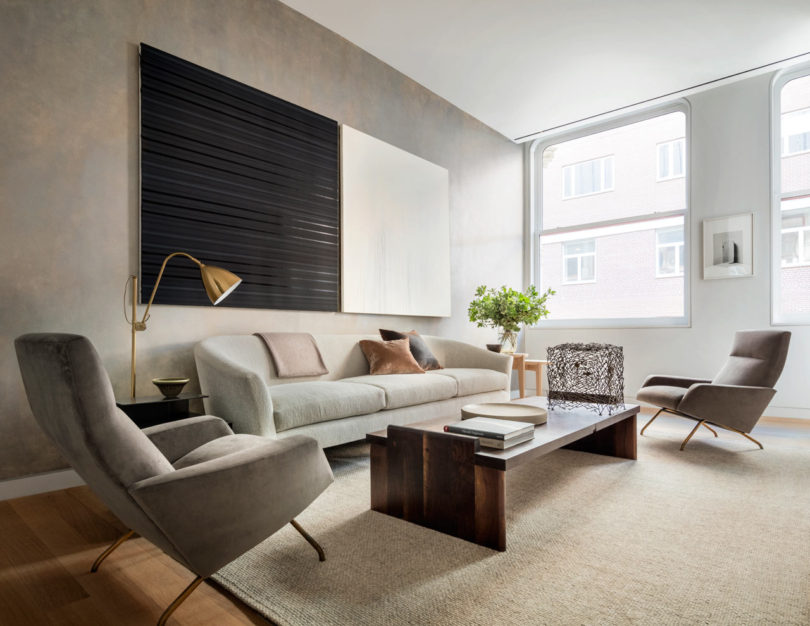 Through his own studio, Brad Ford Interior Design, Ford has orchestrated countless top-tier interior projects and earned numerous professional awards for his leadership in the design community. In extension to his design practice, Ford also runs his Manhattan showroom, FAIR, and Field + Supply, an upscale modern makers fair in Stone Ridge, New York.

Ford’s aesthetic shows his commitment to both minimalism and the contemporary craft movement. We asked him how these ideas guide his design philosophy. “We’re living in a culture of instant gratification, from ordering lunch to ordering a piece of furniture, people want things ‘now’. But sacrificing time often requires sacrificing value and quality. People are realizing this and looking for something more lasting. I also believe people have started to value experience over possessions.” 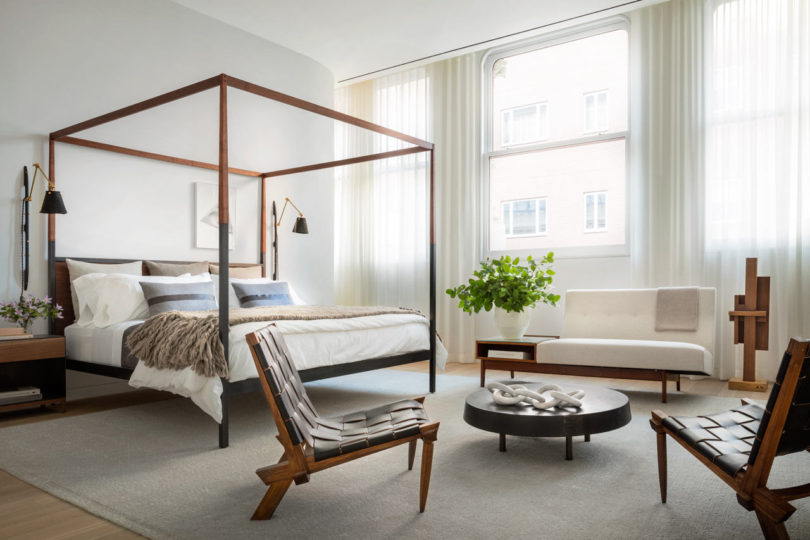 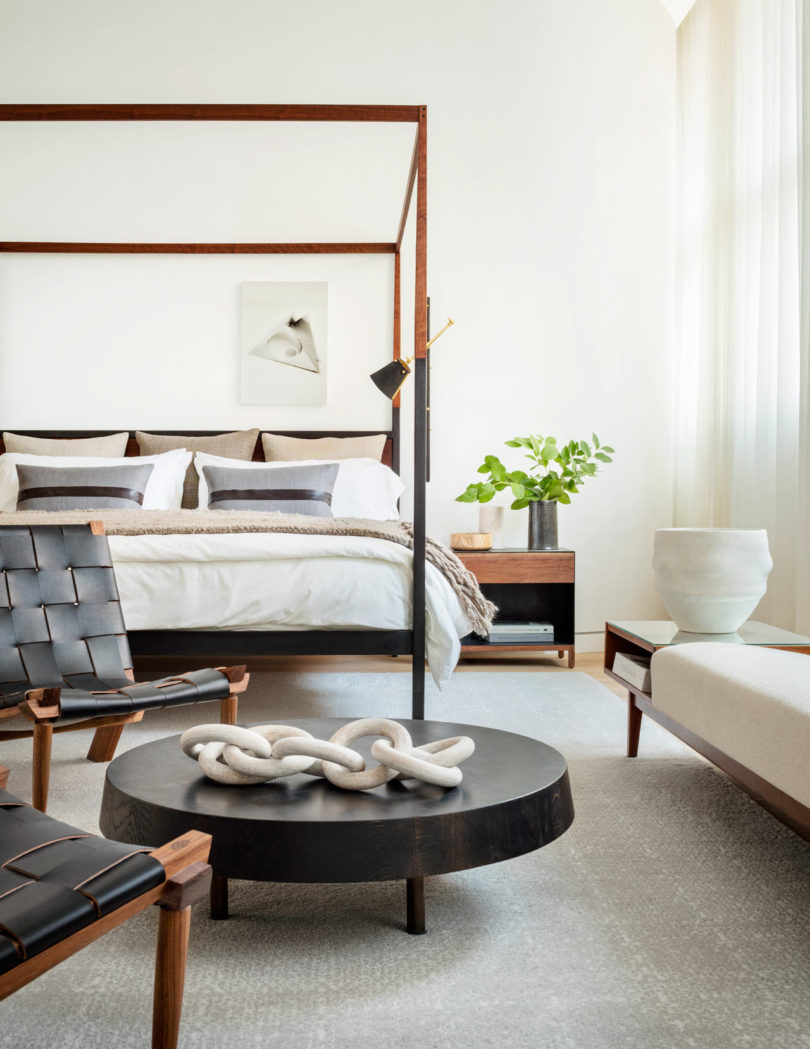 In terms of his own approach to design, Ford strives to balance architectural features, furnishings and art. “It should never be a competition, he explained. “You want to be careful not to create a boring space, so some of the elements should be nuanced. That’s what I love about craft. You can have a really simple form, but the way it’s made might encompass a beautiful detail or a unique finish. The skill and passion put into something made by hand brings a certain level of soul that can add warmth to a potentially cold, modern space. I really do believe ‘less is more’, but it requires a bit more strategy.”

We asked Ford about his collaboration with Shigeru on the Cast Iron House. “Shigeru has always been fascinated by the traditional work of carpenters as well as arts and crafts,” Ford explained. “It seemed like a natural fit to try and furnish the Cast Iron apartment with handmade furnishings from local artisans. The details he brought to the building were so subtle and beautiful and I wanted to make sure we didn’t do anything to compete with his vision.” 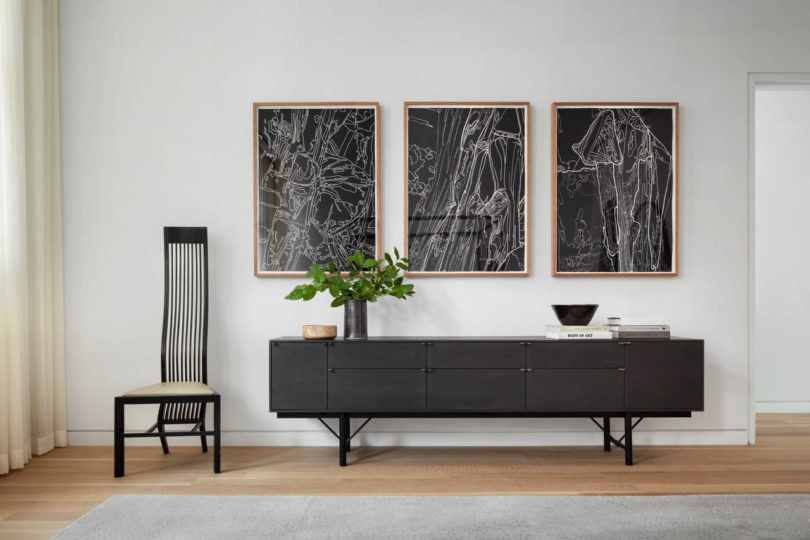 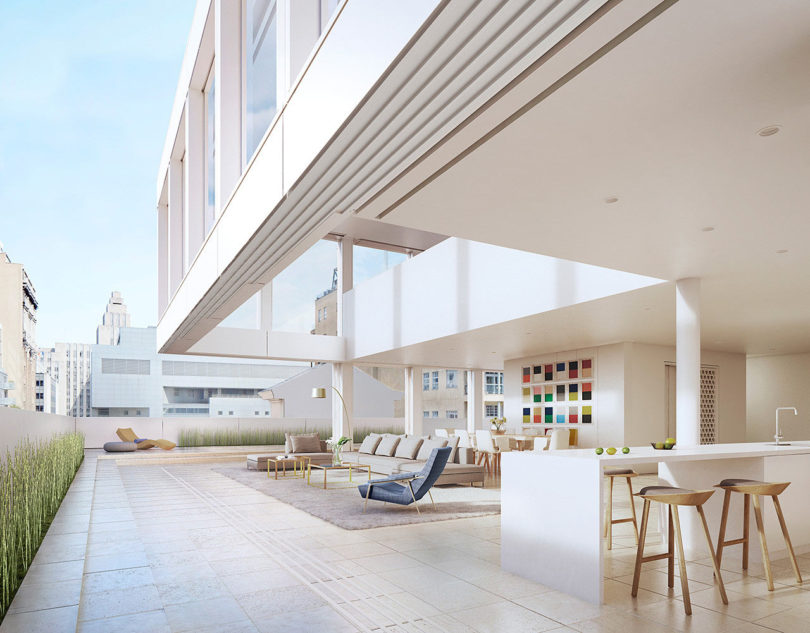 To achieve this conceptual and emotional unity for the model interior at Cast Iron House, Ford looked back through Shigeru’s vast body of work, taking note of the natural materials he has chosen for certain previous projects, including his extensive explorations with local timbers and structural paper tubes. “I wanted to bring a similar earthiness to this project to contrast with the modern architecture and the existing Cast Iron building,” Ford said. “I felt like everything needed to be softened a bit so I chose pieces that had organic forms and warm woods such as walnut and oak.” 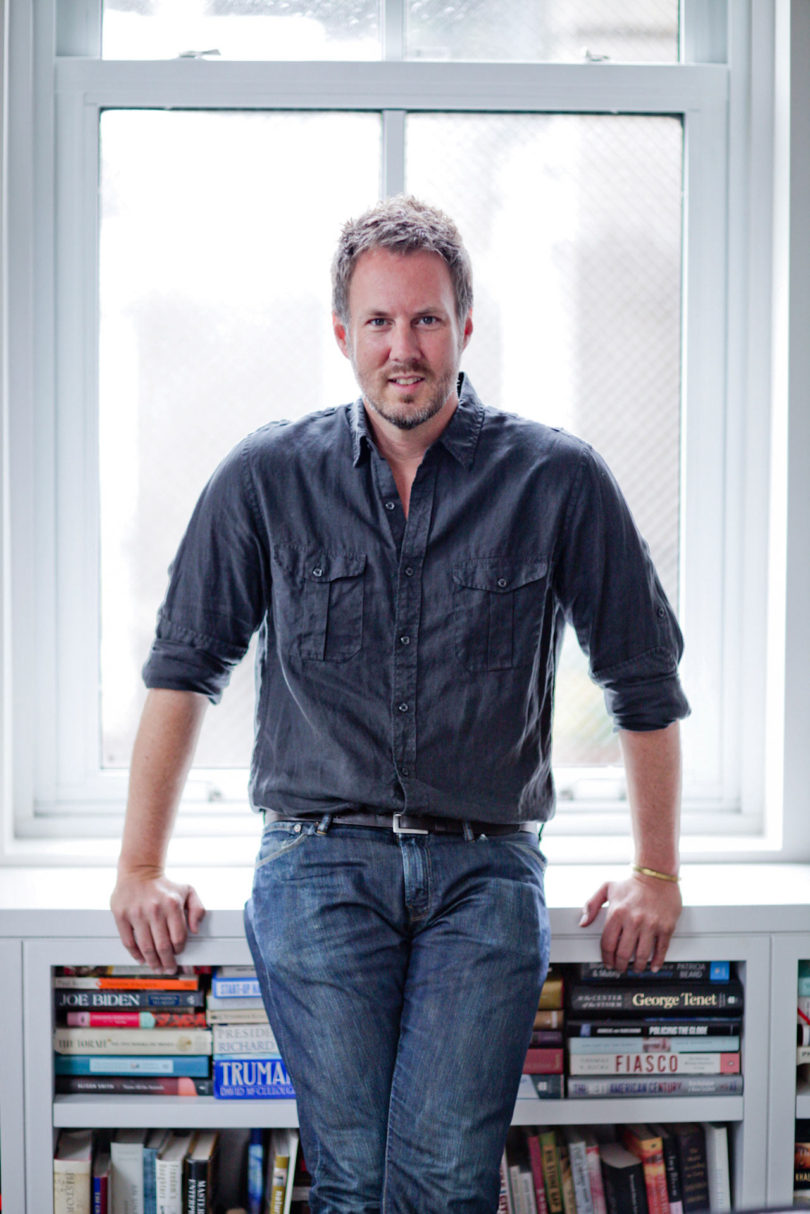 With many years’ experience running his own successful studio, and now with the experience of working alongside a true master of architectural design behind him, we invited Ford to reflect back on his career and share advice for the next generation of designers seeking to elevate their craft. “Tame your ideas. When you’re young and just starting out you should experiment with different ideas and see what comes naturally but eventually you need to show some restraint. It requires a bit of effort, but I always say you can get someone’s attention just as much by whispering as you can by shouting.”

Brick & Wonder brings together a community of exceptionally talented creative professionals in the real estate industry and highlights the most extraordinary properties for sale around the world. Words by Ed Thompson. 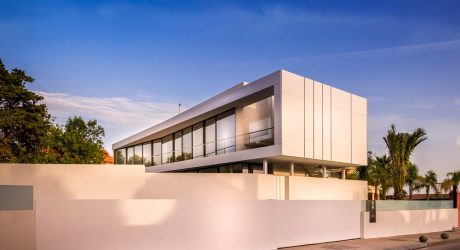 A Holiday Villa with Views of the Mediterranean Sea 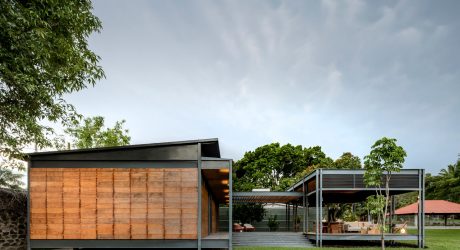 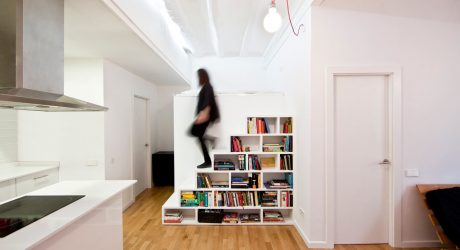 A Barcelona Apartment Gets a Renovation 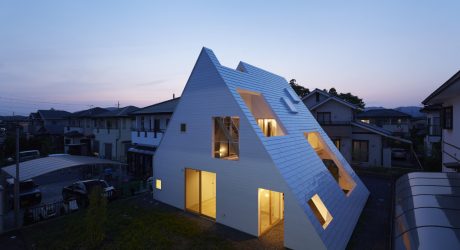 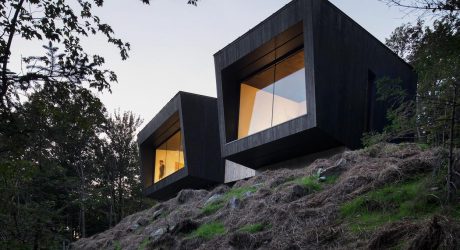 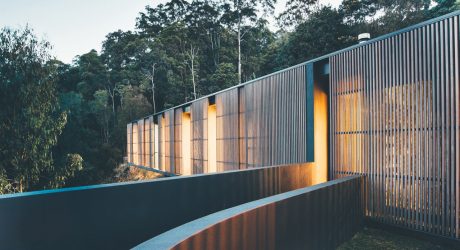 A Pavilion Style House in the Noosa Hinterland by Teeland Architects

END_OF_DOCUMENT_TOKEN_TO_BE_REPLACED 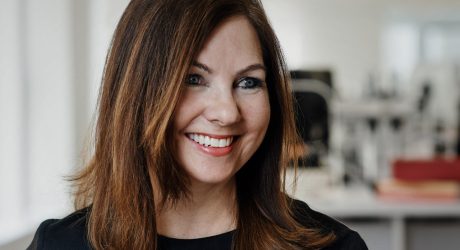 The multifaceted Lauren Rottet shares some of her favorite places around the world, as well as her love of art. 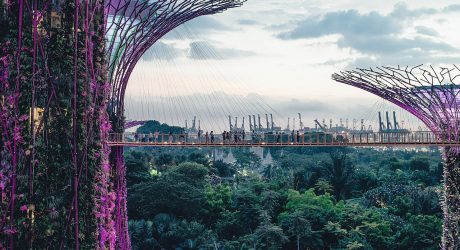 A Crazy Rich Asians inspired introduction to the design and architecture of Singapore. 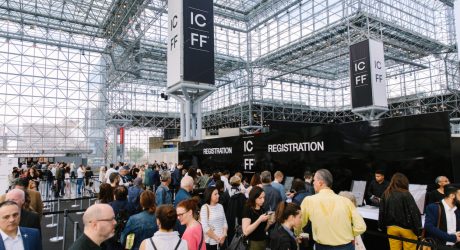