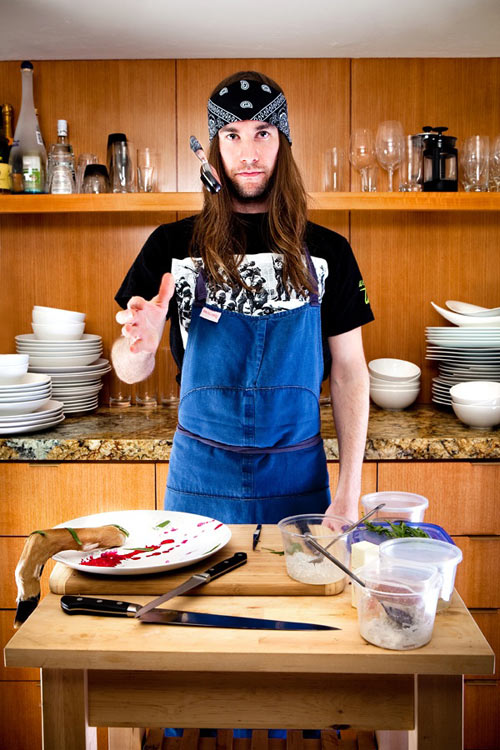 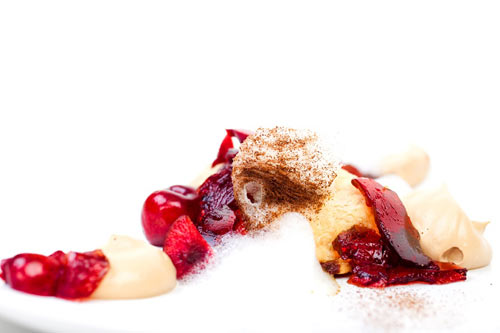 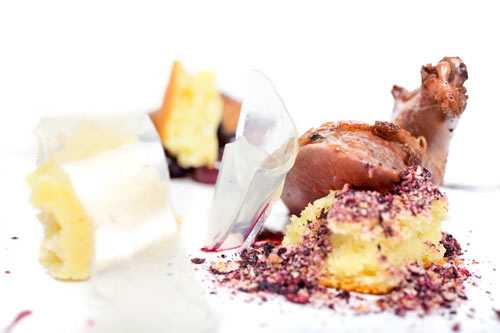 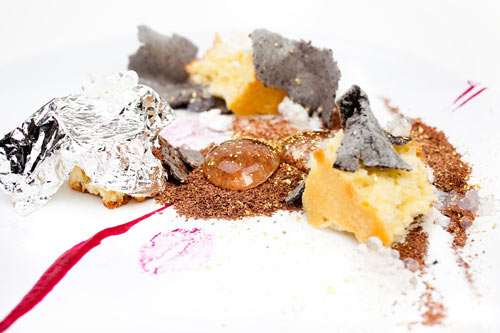 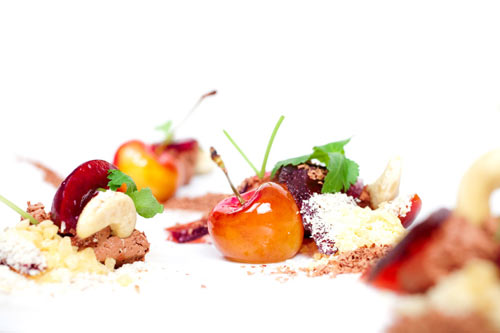 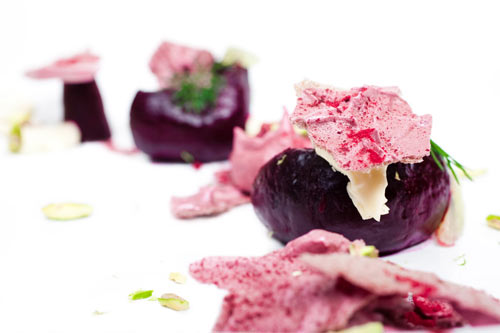 To celebrate the launch of the CT Hybrid, Lexus recruited six young artists from different mediums and asked them to create two original works based on three themes: Challenge, Empower, and Escape. Each piece must challenge the common perceptions of the theme. But there’s more to this challenge: they only have 24 hours house to create each piece. Lexus followed each of them around with cameras to capture the process of creation. Learn more about Fresh Perspectives at freshperspectives.msn.com and check out the final works.

I’m a little bummed that the Fresh Perspectives project is almost over. Last, but certainly not least I spoke with Craig Thornton who creates an experience with food. I was excited to discover that he’s also a Design Milk reader! Food, unfortunately, often gets overlooked when we talk about art, and I was so happy to hear that he was included in the Fresh Perspectives project.

… the wolf… There was actually a lot of thought that went into the wolf and the name wolvesmouth. I chose the wolf because it is an animal that does well in packs but also does well by itself… I like the wild primal aspect of wolves and yet for being so primal and aggressive, they are very closed off and not aggressive at the same time. This falls in line with my own personality; I can be aggressive when needed but for the most part, I keep to myself and focus on my cooking. Also I did not want to have anything related to food as relating something to a type of food or a word being food related would a) give people an automatic idea of what I did b) not convey a sort of attitude or personality I wanted to get across.T he name wolvesmouth I chose based off being grammatically incorrect tying into a contradiction of sorts (think gritty refined two words that don’t go together but can be used in describing something) also I was thinking about how they rolled off the tongue. wolfsmouth doesn’t sound pleasing to the ear; wolvesmouth rolls off the tongue…

Food is something I have always been interested in even when I didn’t really have access to great food I was interested in why and how things are the way they are. I am an extremely curious person, food just happens to be the thing I focus most of that curiosity on.

What is the concept behind the Wolvesden and how did you come up with it?

The concept of the wolvesden is to bring people together who otherwise may never come together in a space where the common equalizer is the food (on the surface). Once you break it down further, it’s more a social experiment wherein some cases people really learn quite a bit about themselves — crazy to think that in one night someone who may never have come to a place they 1) don’t know where it is 2) don’t know who’s coming 3) have no idea what they are eating. And let their guards down have a great conversation exchange information emails numbers etc. For some people we have had, they never thought they could do something like this and have a great time… through nuances that are hard to explain, we try to remove the awkwardness to open the doors for a more socially unawkward experience while making it seem like there’s nothing going on on the surface from music to timing the dishes to what and why I am serving in certain orders. All of this combined just makes the wolvesden what it is… something a bit fleeting, but to the people eating, a solid memory of a night out and a chance to hopefully make some new connections all based from a common interest… great food, great music, and leaving pretense at the door.

On your website, you use music in the navigation, and I also noticed you do some painting. What other artistic disciplines have an influence on your work?

As far as influences, they come from all over the place from the food itself to painting to just walking along the street and seeing something as simple as the road cracked apart with a bright orange graffiti piece in the background then thinking about how to move that “feel” to a plate… or thinking about a situation or outlook I may have and what I may want to say about it, maybe something sarcastic? Maybe something serious? Maybe I want to liven the room up so I decide to put some dish that’s beyond crunchy to make a group who’s being too quiet and aware of their surroundings feel awkward having to crunch in front of someone they don’t know… these are all things that cross my mind while I am cooking or thinking of possible ideas.

What are you working on right now?

I am working on a lot of different projects from art pieces that tie in food, to an art show that food will be a part of. Also working on getting some traveling set up to take the wolvesmouth stuff on the road! I love to travel and I love cooking so why not marry them together and take this experience to other places where people who may not have the cash to come to LA and eat can still come hang with me and the crew and let themselves go if only for a night. I’ve also got a few other things up my sleeve that I am working on but cannot divulge just yet…

How did you get involved with Fresh Perspectives and why did you decide to participate?

I got involved through my agent actually. We had been talking about how I see my cooking and projects that I would like to be a part of and luckily the people at Lexus and Microsoft gave me a chance to do my thing. It was an insane experience to be able to team up with all these people and have them trust in my cooking solely based off of a concept. It’s a pretty cool feeling to see a finished product from an outside perspective as well being able to see the footage and what things look like from all these creative angles, creative lighting, and creative minds that just make everything look so amazing.

I decided to become involved in Fresh Perspectives because I thought it would be a great platform to be able to hopefully inspire people look at food in a different way than they maybe have viewed it in before. At its core, food is nourishing and life sustaining but there’s also an opportunity to really take it to another level as food is the great equalizer in my eyes, you can be someone spending $20 on a meal and have someone spending $100 on a meal and at their roots what makes one better than the other? Say they were both the same quality maybe just different cuts of meat? If you put time and effort into something, you can take something humble and turn it into something luxurious and thought provoking. This is something I hope people take from what I have been able to do being involved with Fresh Perspectives.

What was the most challenging part of creating a piece of work in 24 hours?

The most challenging part of doing anything on my end is sourcing. I have to come up with a concept, figure out what ingredients I want/need, research when/where I can get it then drive around searching. Then, once I locate and find these things, it’s getting back and thinking about the best way to cook and prep these items so they are at their peak. For instance, cooking the rabbit and serving it right away the flavor will not have as much depth as cooking a rabbit and letting it cool in its own juices slowly, then cooling and reheating. The beet juice for the parfait needed to be cooked down to gain that roasted beet flavor then enhanced with a little vinegar salt and blanched with a touch of sugar rather than just the raw beet flavor, which changes the whole dish. Making my own molds from blackberries — which I have never done before — this took time trying to figure out the best way to actually get the “blackberry” out of the mold without breaking it apart. A blackberry has a lot of nooks and crannies, so navigating around those to not disrupt the texture took some time. It’s the thinking and execution of an idea — literally it was the whole thing!

If you could collaborate with one of the other Fresh Perspectives artists, who would it be and why?

That’s a hard question to answer because everyone is so amazing at what they do. But I tried to cut a pair of old jeans into shorts once and ended up with some Daisy Dukes, so I would probably go with Robert James. There’s an aspect in what he does that’s hard for me to grasp while relating too… It would be a real challenge to “pair” dishes with clothing or a backstory to why a piece was made. I love all the other avenues of what everyone else has done as well but there’s something about a tailored jacket and pants that is pretty amazing. Having a piece of clothing over a long period of time and watching it get scuffed up and beat up develops its character and in a way its own story. Every time when I put on a leather jacket that I have had for years, I see a scuff where it got caught in a fence when I was in Charleston trying to find this restaurant I was looking for. It gets brought back in my mind, and it’s cool to have those “badges” and memories that something as much as a scuff can make you grin and shake your head as you remember a time or place and what was happening… really, at the end of the day, I think every artist in this Fresh Perspectives project is a tailor in his/her own way. We are trying to find a way to tailor to needs/emotions/ideas while putting our own stamp throughout that piece(s).