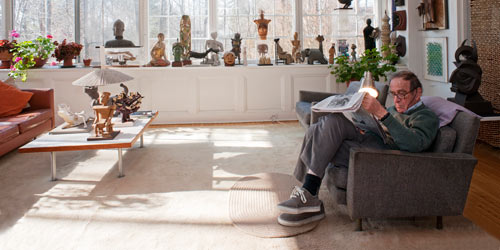 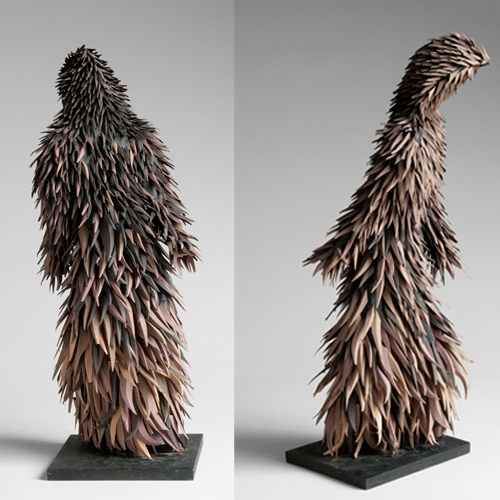 Basel-born Uschi Weissmüller is the founding director of A4 Studio, the graphic design arm of Maharam. Irving Harper Works In Paper (Skira Rizzoli, February 2012) is the second book she has designed with A4 Studio (The first was Maharam Agenda, published by Lars Müller in 2011.) When we saw the book (you won’t believe the three-dimensional works Harper can create out of paper until you see them), we asked her to work up a Friday Five for us. After all, she was just hanging around ;)

1. Irving Harper in his house
Iring Harper in his chair in his light-flooded living room, which he also calls his office. Reading his books, listening to classical music on headphones, taking phone calls, filing letters and notes on the side of the seat cushion, surrounded by 40 years of his handwork. As Julie Lasky wrote, “Harper still lives in that house, surrounded by those pieces, in a gesamtkunstwerk of which he, at ninety-six, is not only the creator but also a central, vital component. A sumptuous catalogue of one man’s perambulations along the boulevards of twentieth-century aesthetics.”

2. Irving Harper’s system of arranging objects in his home
Harper’s house is an arrangement of daily objects, colors and his sculptures. In the kitchen, his towels are arranged by color (red, orange, yellow) and texture. All his lamp shades, wall and window screens were built by him. In Julie Lasky’s words, “Harper’s interior is eclectic. Permeated with a calm sense of artistic adventure, it reflects lives joyfully lived.”

4. Irving Harper’s sculptures
All of his sculptures created over four decades are intriguing. These emphasize that labor of occupational therapy and passion. The one made of folded construction paper glued in place…just cleaning, dusting and renovating each piece was such a challenge for me; I cannot imagine how much patience and time it took to build it. He never sketched or planned ahead. When you ask him what he learned over time, his answer is “nothing.” The longer it took him to finish, the more satisfactory the outcome. He stopped making them when he ran out of space around 2000.

5. Irving Harper’s hands
These are the hands that made those incredible paper sculptures. This photo was taken three years ago,when Harper was 93.