As some of you may know, Mr. Design Milk (Jordan) and I recently moved into a new house, which we bought long ago. Well, we’ve finally moved in. I decided to develop a House Milk column here on Design Milk to chronicle our progress as we design, decorate, and redo the house. This isn’t a column about me, it’s about regular people with a normal budget trying to make a modern house into a home.

I don’t even know how to begin to get into the back story of how we ended up buying a mid-century modern house in New Jersey — so I won’t… at least not in this post. Seriously, I could write a book on the topic. 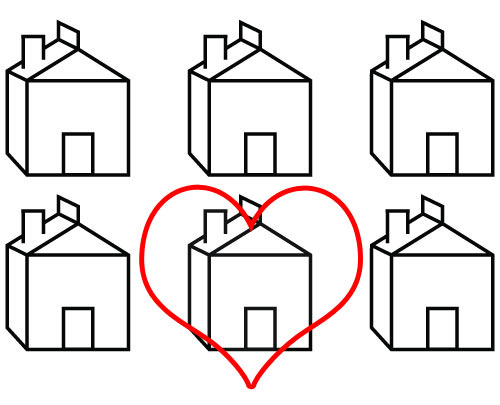 This isn’t our first house. We’ve owned two others: a condo and a townhouse (stories for another time). In the meantime, we rented a slew of apartments over the years. Nowhere ever really felt like home. When we returned to New Jersey from California, we decided to rent until we were able to find The House. We agreed that we didn’t want to settle or buy a “starter” home — we had done that twice before. We wanted the end all be all house. We decided that we’d stick it out until we found The HOUSE with a capital H-O-U-S-E.

For the first year after moving back from California, we saved money and continued to watch the real estate market plummet. The market just started going to crap when we left for CA so we had no idea what it was like two years later. After being back for a year, we decided to start going to open houses and checking out what we could get for the money. There really aren’t too many housing developments in our local area that boast unique or impressive architecture, so it was easy for us to rule a lot of homes out. Being a design nerd (read: picky and slightly snobbish) was more of a curse than a blessing because there were really only a handful of contenders, and they were few and far between.

Jordan and I could only agree on three types of architecture: Victorian, craftsman, and mid-century modern. After deciding that a Victorian or craftsman in the neighborhood we loved was either out of our price range or a money pit, we zeroed in on one neighborhood where my aunt lived that had a pocket of maybe 20 or so mid-century modern homes built in the late 1950s. My aunt had one of the nicest — and largest — mid-century homes in the neighborhood. She had even put in a lot of money making some upgrades to the house. Her house was our dream house. At one point, my aunt mentioned to us that she was thinking about moving in maybe a year or so. We didn’t take it very seriously. She also said that she wanted more for the house than we wanted to spend, especially in an uncertain real estate market. We also assumed and hoped that we’d find a place much sooner.

Now that we had our sites set on the right neighborhood and house models, we had our Realtor send letters to all the homeowners, we hand wrote letters and we drove through the neighborhood every weekend checking for garage sales, moving trucks, or homes that looked abandoned. Yeah, we were stalkers. For almost 10 months we circled that neighborhood like vultures. We thought we would be able to make a deal on one of the homes that we learned had been abandoned for many years, but that fell through. Luckily, some good came of it because the owner is now looking after the home with a bit more care. I think we deserve bonus points for helping the neighborhood curb appeal.

Finally, just when we were at our wits end, beaten down, desperate and ready to get on the first plane back to California we sat down with my aunt, made a deal and her house became our house.

Stay tuned for more House Milk as we get settled in!