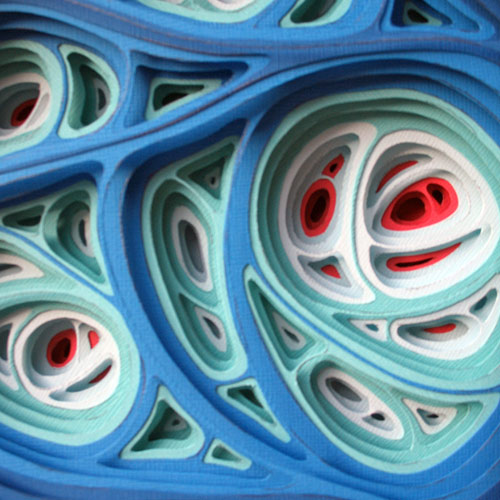 Charles Clary, or Paper Extravaganza, was the winner of Art Milk’s recent grant over on Society6. We were overwhelmed by the amazing papercut shapes, as well as the sculptural topographic installations. We’re so happy that we chose Charles because his work is fascinating, intriguing and totally different than a lot of what we’ve seen. We spent some time getting to know more about this papercut pioneer. 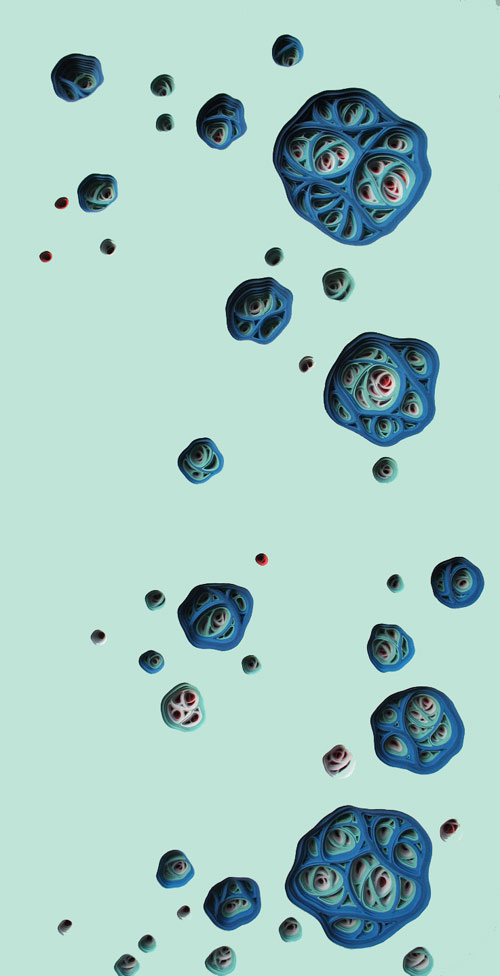 How did you come up with the idea for creating your hand cut paper installations? What inspires you?

It took a while to come up with this concept. When I started graduate school I was primarily making paintings that were based on this microscopic viral world. I was forcing them a bit so they weren’t coming out like I wanted them to. I kinda got stuck until I was awarded a studio in New York for a quarter. While I was there I decided to play around with materials and break away from the 2-dimensional format, because it was becoming a little to restrictive. I hit up as many art stores as I could and happened to stumble upon the paper I use today. I had played around with cut outs before and thought it might translate well with the imagery that I was using and after two years its kinda just evolved into what I’m currently working on.  There’s so much that inspires me: music primarily (any genre), microscopic or electron microscope images of whatever, computer generated sound waves, architectural model’s the list goes on and on.

Is there anything special about the paper you used to create these pieces?

Yes. The paper I use is made by a company called Bazzil. They make paper primarily for the scrapbooking industry. The reason I chose this paper is because the company produces over 500 different colors it’s extremely good with light fastness, the paper is also of a very heavy weight and comes in multiple texture patterns. 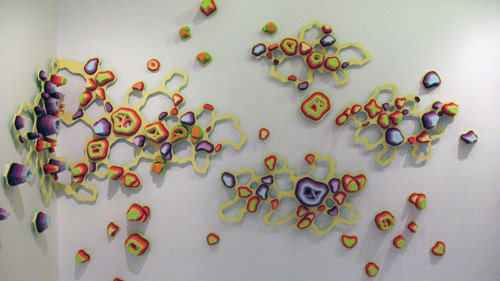 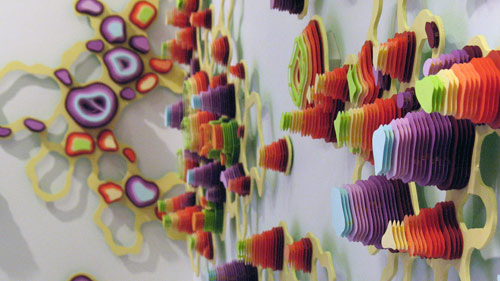 What do you enjoy most about working on these installations and why?

It’s pretty much a love/hate relationship with my work but I love everything about making my installations. Hate only comes in when I’ve spent 60 or more hours on one piece and it’s still not done. I mean each installation can have as many as 4000 individual cut sheets of paper, up to 30 panels, and over 14,000 spacers The whole process becomes very meditative, whether its cutting and sanding my supports, or spending days meticulously cutting paper, or cutting all the polystyrene spacers that go in between each layer everything takes so much time that I have to fall in love with it or I’d go crazy.

Do you think your work will get more complex or reach a bigger as time goes on.

Yes. Ever since I started the larger scale installations I have wanted to create an entire room that becomes an environment of paper constructs encompassing the viewers entire peripheral. I’d like to do the same with my shadow box work but instead of shadow boxes I would like to create giant faux walls that I can cut into. I would need to get funding to create projects such as this but hopefully in time I will be able to actualize these ideas.

Would you ever start incorporating other materials into your work or will you stick with your usual materials?

I’m actually looking into creating giant public installation work out of steel or some other kinds of metals so that I can mount them on the sides of walls. Furniture design is something else I’m experimenting with. I’ve already made a few tables for my living room and I’m looking to expand into shelving and counter tops. 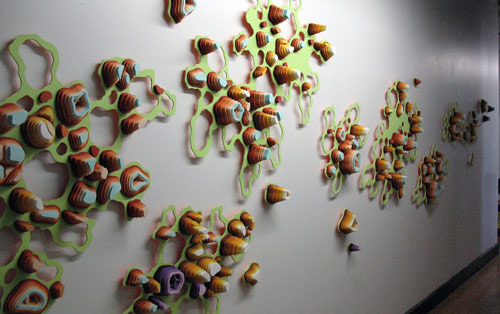 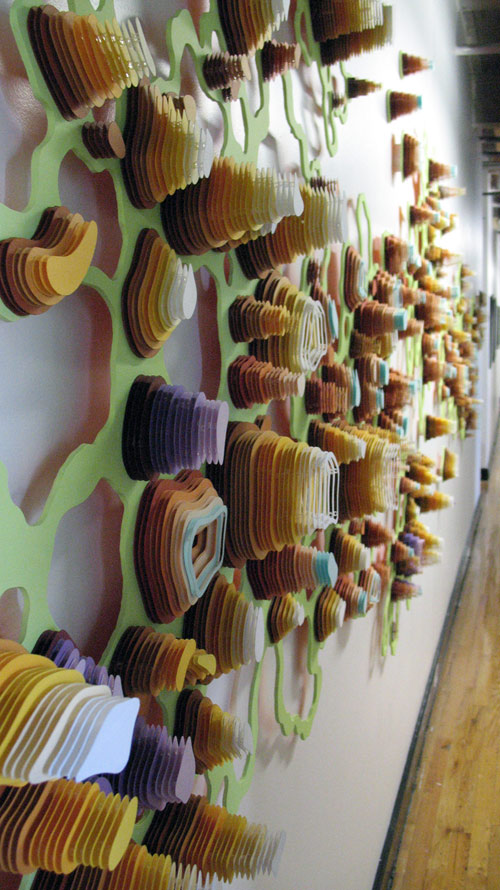 What would your dream studio consist of? How would you decorate it, what would make it extremely functional for you, where would it be, etc)?

My studio at the moment is a second bedroom in my apartment so anything would be a step up. I would like more of a smaller warehouse space nothing huge something like 50’ x 50’ x 12’ space would be nice that way I can install work before a show to play around with placement instead of laying them on the floor to get a rough idea. It’d consist of 2 large work tables coated in self healing cutting pads, a fully functional wood shop, and a large scale display area for mounting installations. I’d also like work stations for several Dremmel tools and a large scale Exacto blade distributor, which doesn’t exist but if I have the money for this kinda studio then I’d remedy that. It would be nice if my studio could be located in a nice rural area overlooking a large wooded area or body of water but NYC or LA would be nice as well.

Lets say you were a host at a dinner party and your group of guests consisted of great artists such as Michelangelo, Van Gogh, and many others, how would you explain your work to them.

I’d explain to them that my work not only explores basic design with color, composition, scale, and form but it also explores the idea of the audience and what their role is with each piece. Since my work protrudes from the wall engaging the x, y, and z axis I have to be more aware and attentive to how things are constructed and how they are viewed from every angle. Since there is no frame blocking the viewer from the work, I also engage the viewer’s innate desire to touch and explore the surface of an object. As for the concept behind the work I have created a viral like environment that creeps and grows across its surface. The world is loosely based on the idea of musical sound waves radiating from a central point growing infinitely within its environment. Upon viewing this world one might question whether or not we are voyeurs into this world or if this world is voyeuristically invading our own.

Where can people see more of your work on and offline? 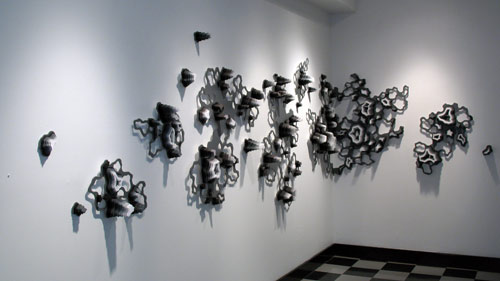 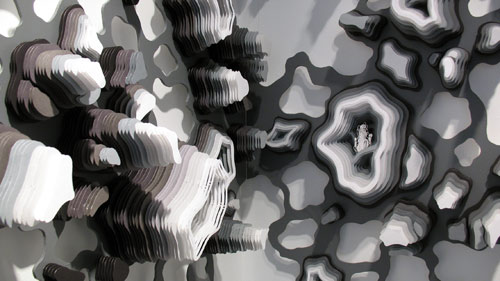 Thank you Charles for taking the time to do this interview and share your awesome artwork with us!