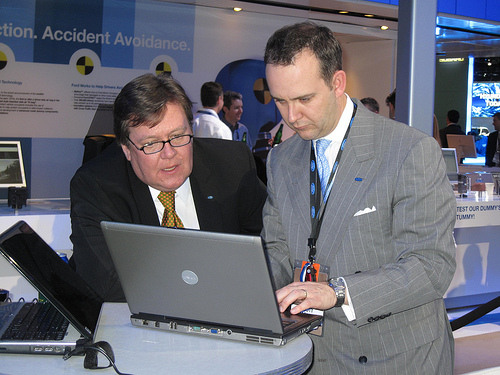 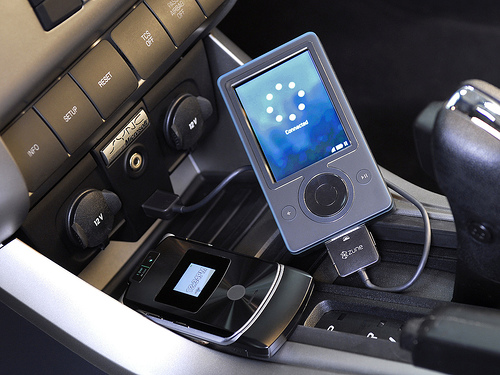 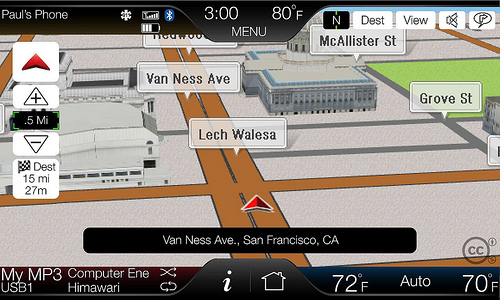 Lately, Ford’s focus has been on technology. The Ford SYNC™ is a fully integrated, voice-activated in-car communications and entertainment system that works with most Bluetooth-enabled mobile phones and digital media players. They also just introduced the innovative MyFord Touch driver connect technology, which has received a Popular Mechanics’ Editor’s Choice award and CNET’s “Best of CES” at the 2010 International CES. Everywhere I look, I hear about what Ford is doing. And, to be honest, they are one of the friendliest brands out there when it comes to bloggers. Very refreshing.

Moray Callum is Executive Director, Ford Americas Design. And I’m sure you’re wondering why I am chatting with him. Well, we don’t talk much about cars here and I thought it would be a good way to bring some more diversity into our technology category. Plus, I’m always interested to know a) where car designers get their inspiration, b) where cars are headed in terms of design and function, and c) when do we get our hovercrafts? OK, I didn’t ask that last one. But I did get on the phone with Mr. Callum to talk design. This guy’s a big fish: he has overall responsibility for the design of all cars and trucks designed in Ford’s North and South America studios, and he also will guide the design of Lincoln and Mercury products. Callum joined Ford in 1995 from Mazda, and he’s also worked with Chrysler Corp. UK, Peugeot-Citroen PSA, and Ghia Spa (he’s from the UK).

Recently there has been an interest in vintage and mid-century modern design in the furniture and art markets. Has that translated to the auto industry as well?

There is an amount of nostalgia. There are some specific cars that have done that, the Beetle and Mini for example, and we tried it a few years ago with the Thunderbird. People tend to look back and think of the cars they liked when they were a kid. But, I think what we find generally is that once you’ve done that once, it’s difficult to move forward, and we like to move forward as opposed to going back to the past.

We’re putting a bit more sculpture in cars, and I think that’s what people are relating to when they look at old cars and new cars. We’re learning to bend sheet metal a little more than we ever used to. This new technology is allowing us to form metal differently. We make cars in a completely different way than we used to make them in the past, when it was very labor intensive. So, I think it’s a little bit of nostalgia combined with the want of people for the vehicle to be expressive.

Where do you draw inspiration from that is outside of the automotive industry?

We get a look around at everything: product design is obviously of great interest to us, as well as architecture and fashion. We use a lot of trends from fashion for our colors and materials. Our designers are generally designers first and car people second, so they are very much interested in what’s going on in the world outside. If you look at the Fiesta, for example, you can see that the switches on the center console are more akin to a cell phone than what you would normally find in a car. Even the information system we’re showing on our screens now is something we’re learning more about — we’re getting more into entertainment design as much as product design. So, we’re really expanding a little bit everywhere. Good design is all around us as well. You can even go into Target and you can be inspired by something there.

How much of the design of a vehicle is related to traditional needs, such as speed and power, and what percent do you think is driven by public demand and “the cool factor”?

We start off with a lot of limitations. A lot of it is legislature in terms of safety, insurance, and damageability. Then, there is the packaging of the components. We start off with packages that are driven by engineering constraints and legal constraints, and then we get to take that package and make it exciting and make it visually interesting so that the public relates.

There seems to be a rise in the focus on technology and “gadgets.” How do you balance this with the other needs such as performance?

How do you balance eco-friendly design and technology?

We do look at the sustainability and recyclability very closely in a lot of our products. You’d be surprised how much is recycled at the end of the day. I think in terms of the fact that technology is disposable and moving very fast, we need to make our technology systems upgradeable. Our SYNC system is upgradeable so that you don’t have to throw it out; you can upgrade it as technology changes.

What is Ford as far as hybrid and electric vehicles are concerned?

We like to think we’re covering all the bases. For example, over the next three years, we’ll be bringing an all-electric vehicle, a battery electric hybrid, and a new generation of hybrids. We’re also moving forward with our ecoboost technology, which is a way to get much greater efficiency out of gas engines.

What’s going on for the future of Ford?

We think that the SYNC system and technology are going to be very important in the future. Also, we’re really trying to keep our cars fresh, new, and exciting. Hopefully we will be seeing even more cars starting to look a bit different with more character.

Many thanks to Moray Callum and the Ford team for this interview!