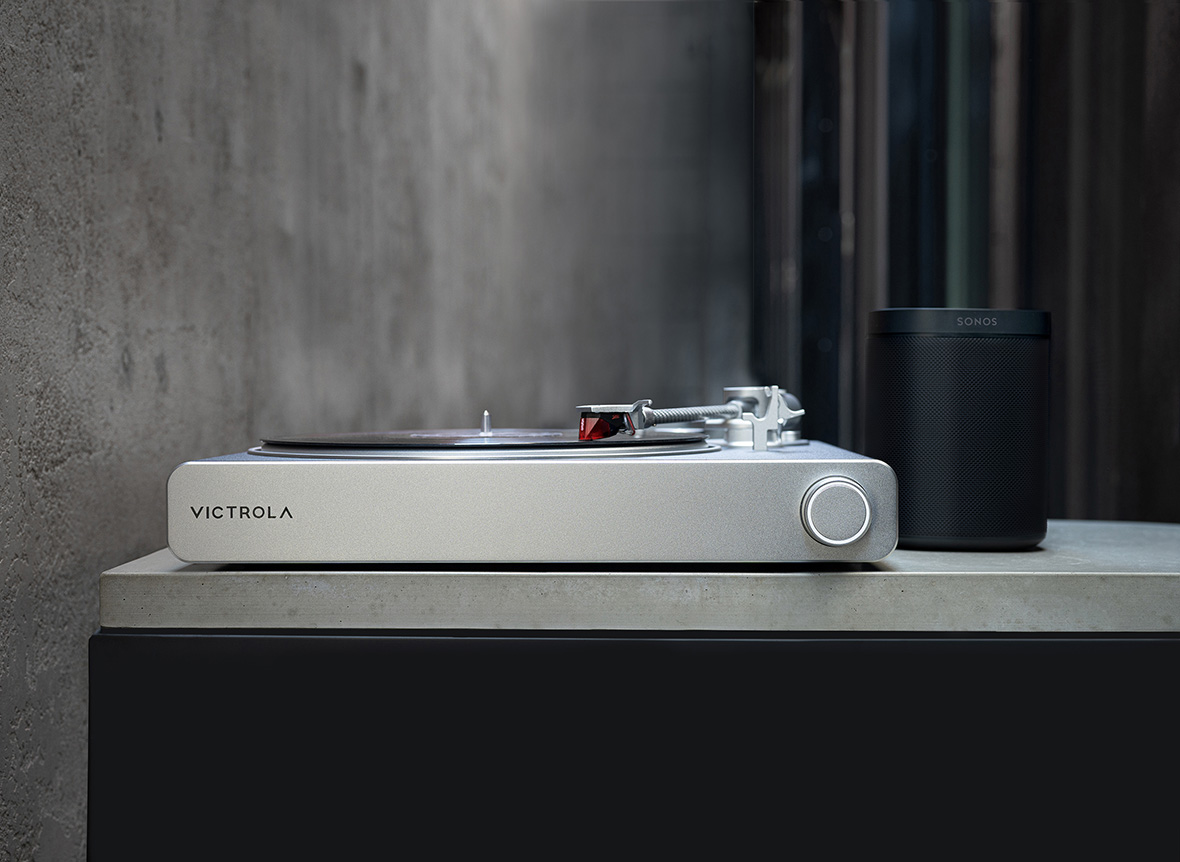 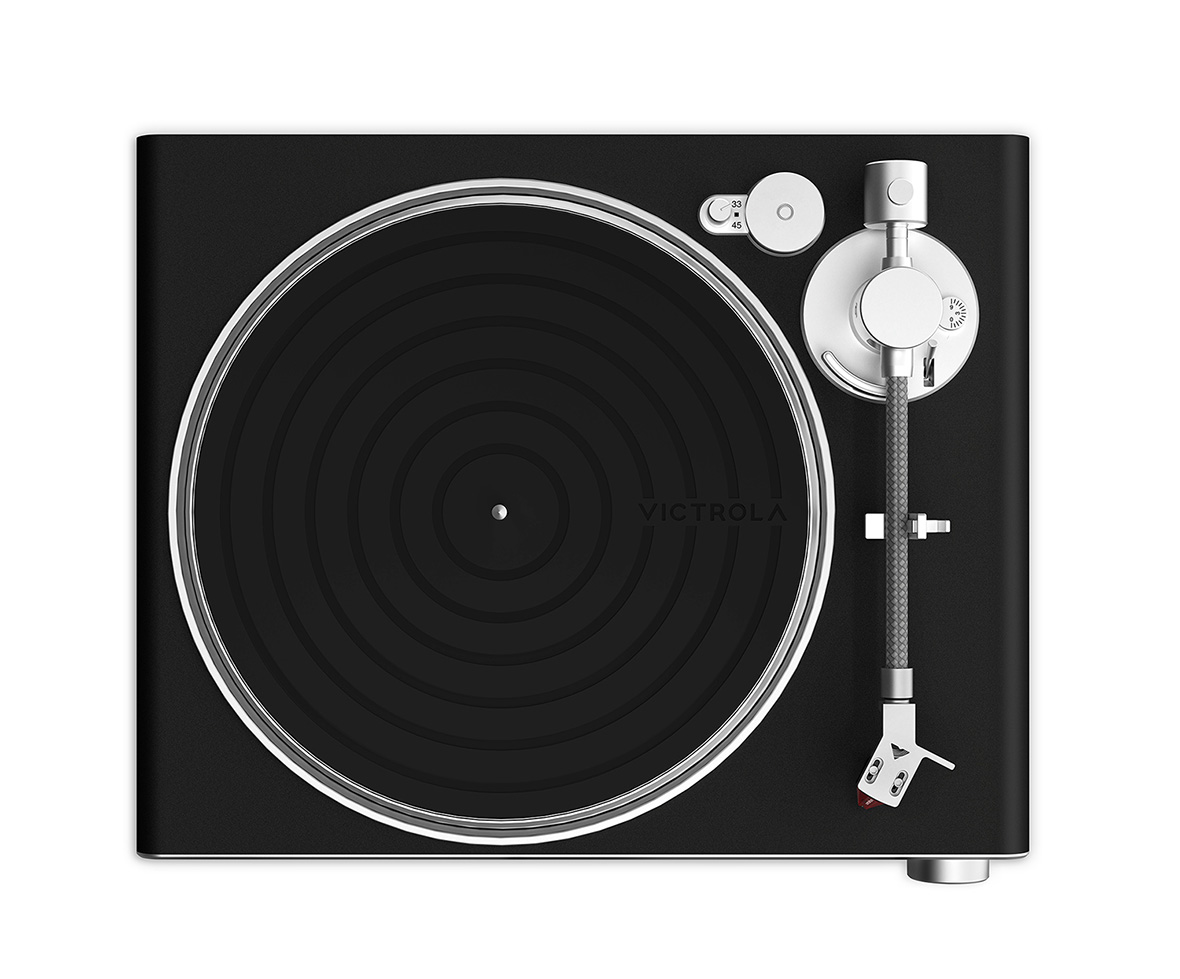 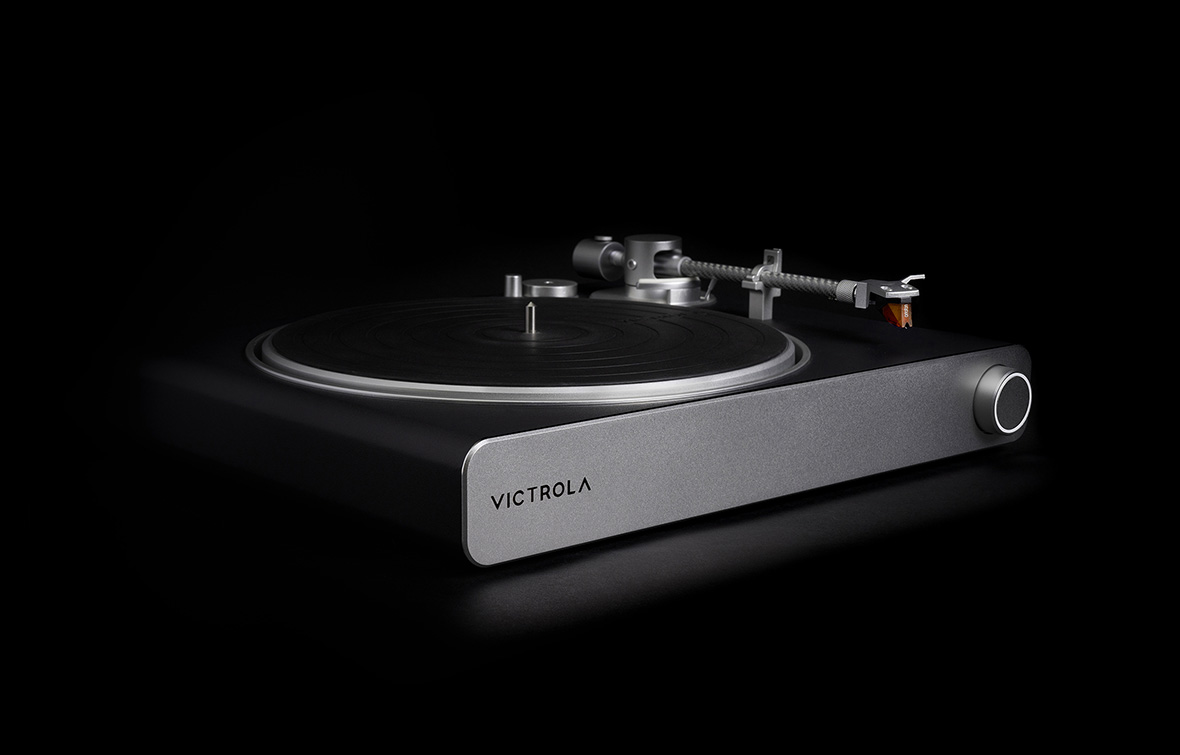 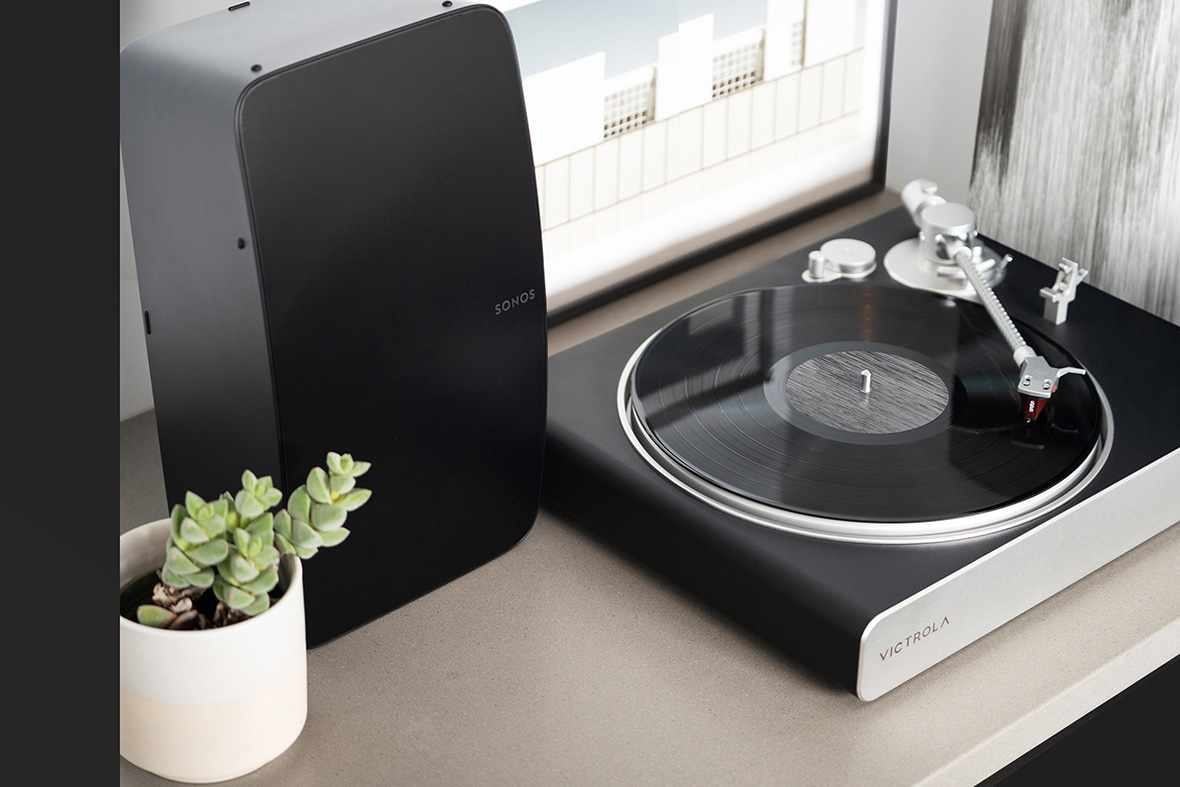 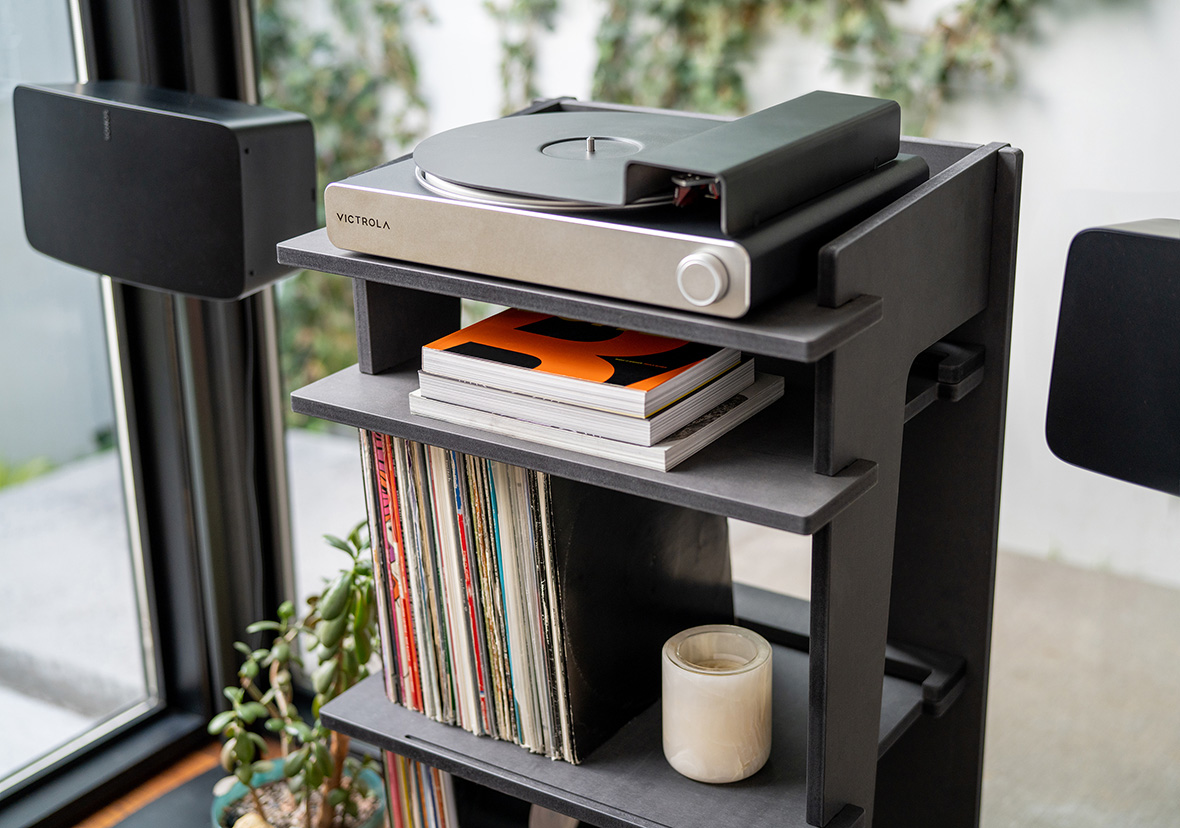 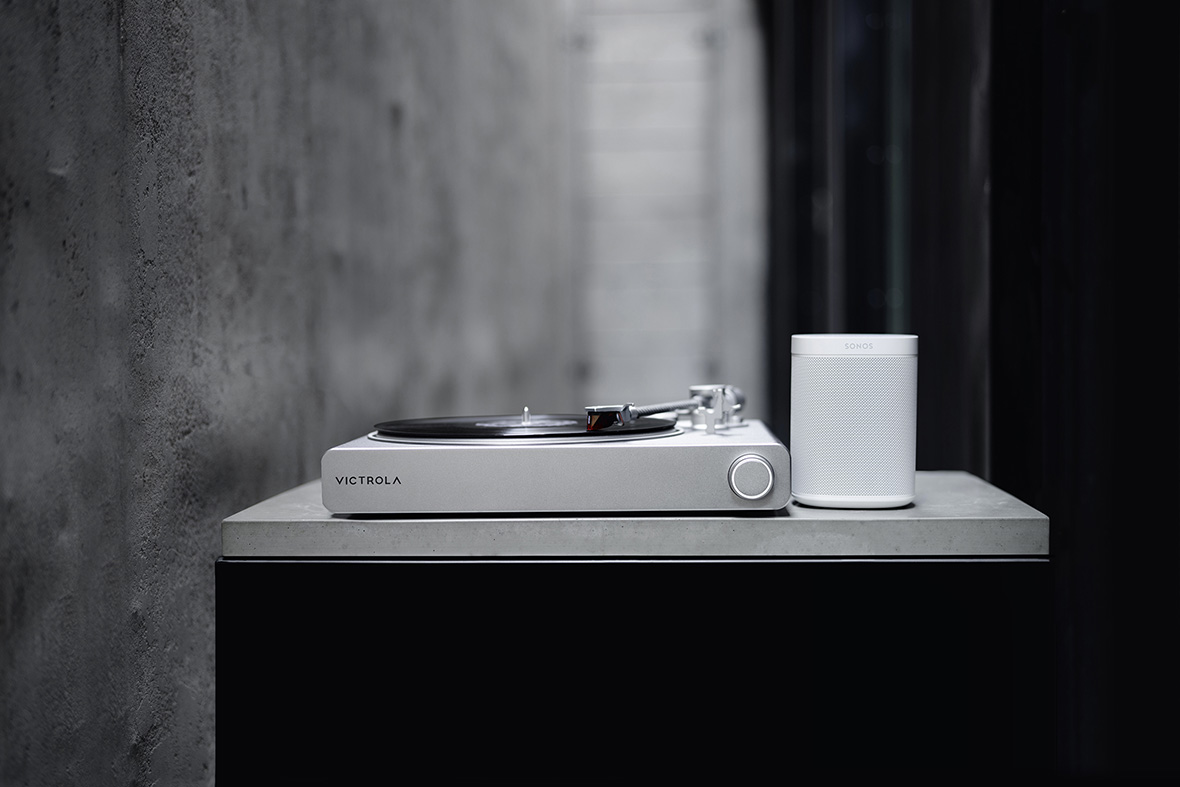 Victrola is a name steeped in history revered by audio enthusiasts, vintage and antique collectors, and historians. It is also a name quickly waning from public memory, the victim of history and technologies march ever forward. One of the early American phonograph makers (a progenitor of the record player), the brand’s iconic horn speaker phonograph, beautifully crafted VTLA cabinet players, and its “dog and phonograph” logo became nearly synonymous with the then-modern technology that brought audio into the home.

In a vein similar to the recent DeLorean motor revival, the Victrola trademark has been resuscitated by new ownership seeking to conjure a contemporary image built upon the waning nostalgia of the more than century old brand. The Victrola Stream Carbon is a notable attempt in this resurgent effort. 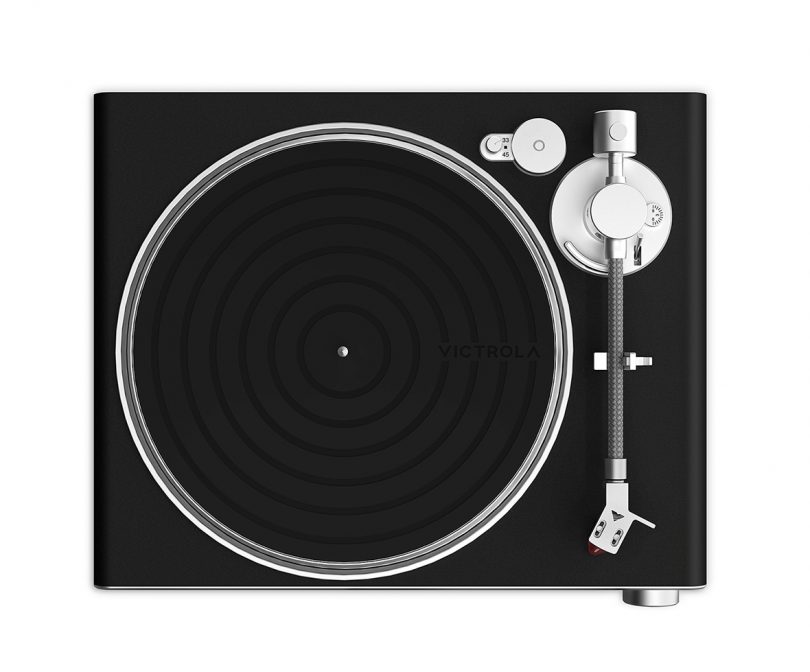 The sleek minimalist modern design of the Victrola Stream Carbon turntable seems the antithesis of those early Victrola phonographs, until one remembers those early record players were cutting edge at that time. This new generation is not only edited of extraneous flourishes, taking on a gently rounded metal slab design with a single knob control in front industrial design, but also forgoes the need for speaker cables.

Instead, the Stream Carbon was designed specifically to pair with that most popular of wireless home audio ecosystems, Sonos. Scott Hagen, CEO of Victrola, notes the popularity of vinyl listening amongst Sonos users as the impetus for serving the growing niche of enthusiasts dedicated to analog-era audio. The 2-speed, belt-driven turntable itself was designed over several years in cooperation with members at Sonos to ensure a design and performance harmonious with the simplicity Sonos has built its reputation upon, earning the Stream Carbon a Works with Sonos certification.

“We are proud of how easy to set up and use the Victrola Stream Carbon is,” says Hagen, “But we are even more proud of the reaction we see when someone listens to records with friends or family through their Sonos system.” 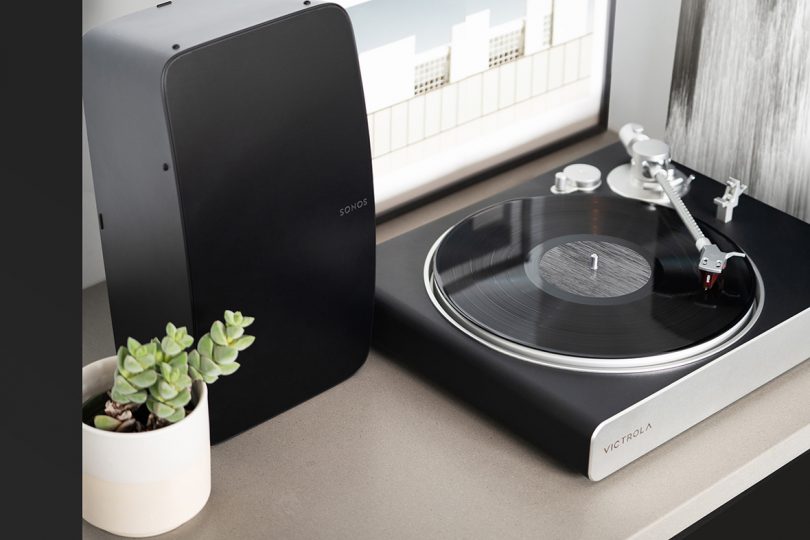 The turntable is constructed with a low-resonance veneer plinth and paired with a carbon fiber tonearm, custom-designed removable headshell that attaches with a handsome knurled collar, and tipped premium Ortofon Red 2M moving magnetic cartridge. Playback can be controlled directly from the Sonos app, or if you’re the tactile type, using its prominent illuminated control knob. And if you do happen to prefer to listen to your records connected to traditional wired speakers, RCA output makes the Stream Carbon adaptable to those needs also. The only absent detail we hoped for is the dog and phonograph logo.

The Victrola Stream Carbon turntable is available for pre-order and will eventually be sold online and at retailers for $799 starting in October.