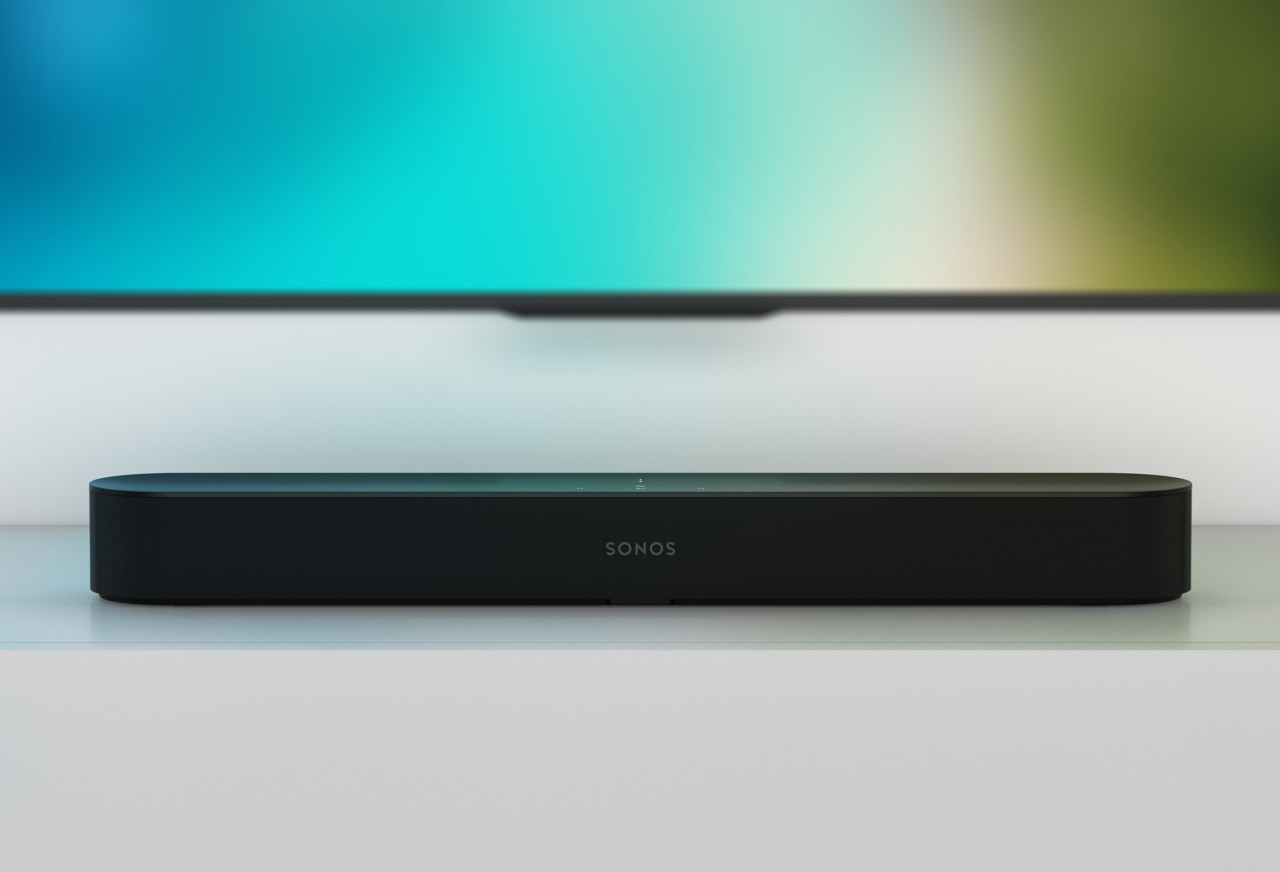 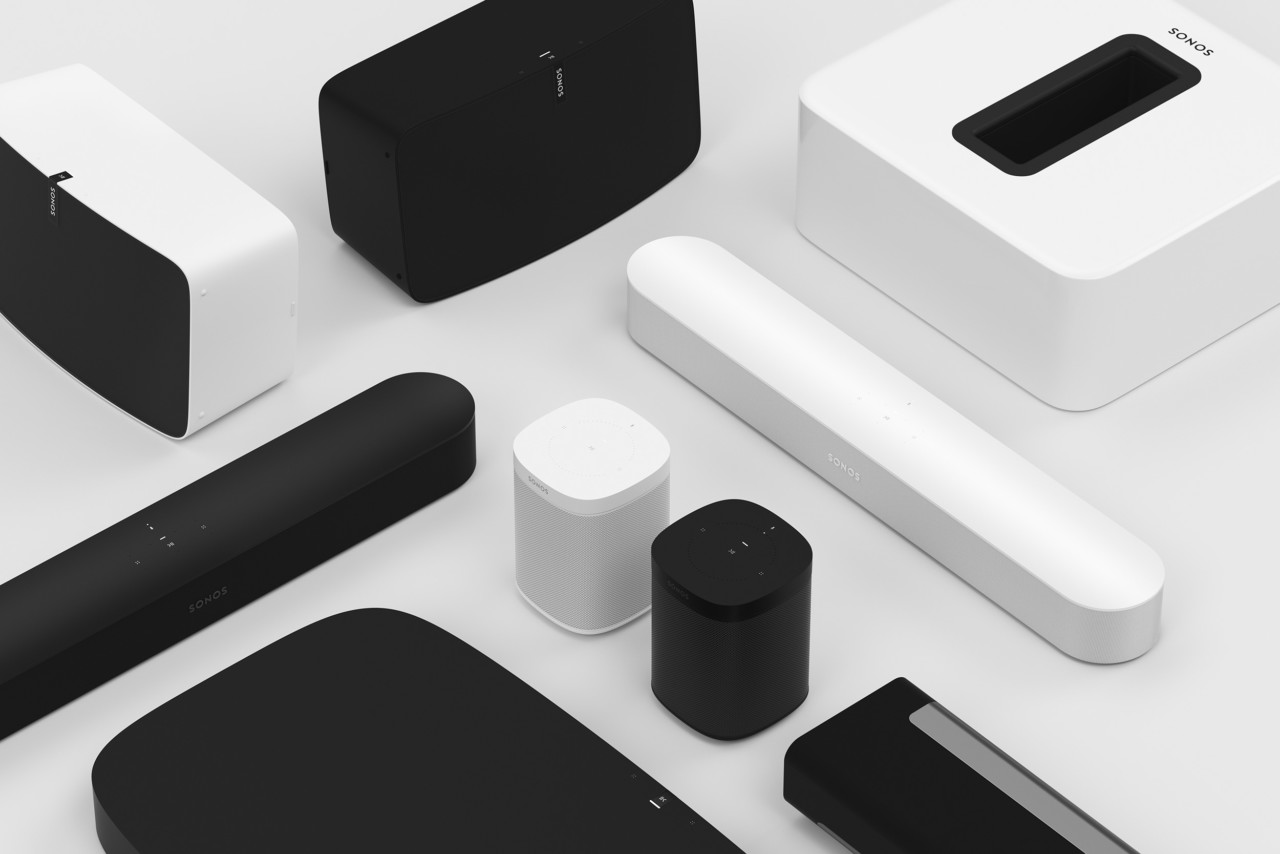 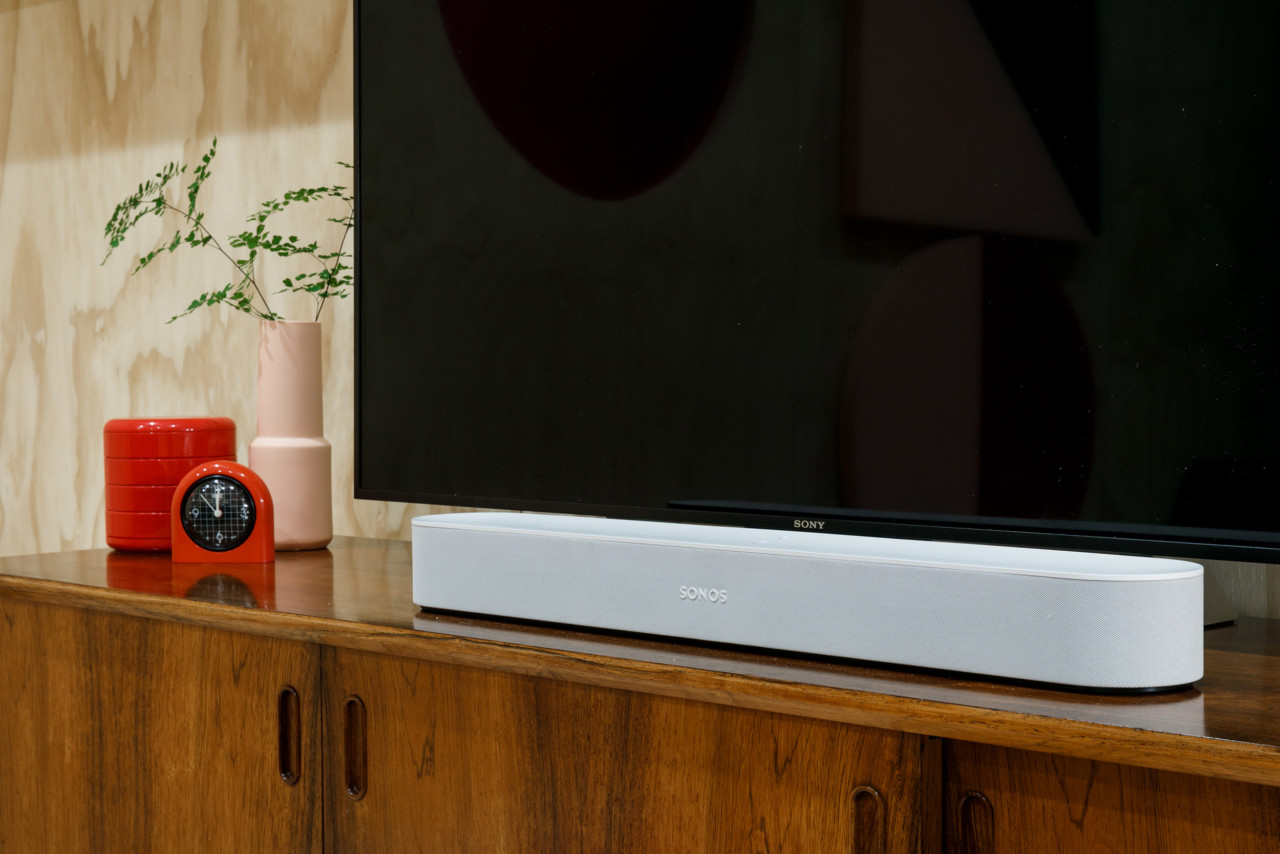 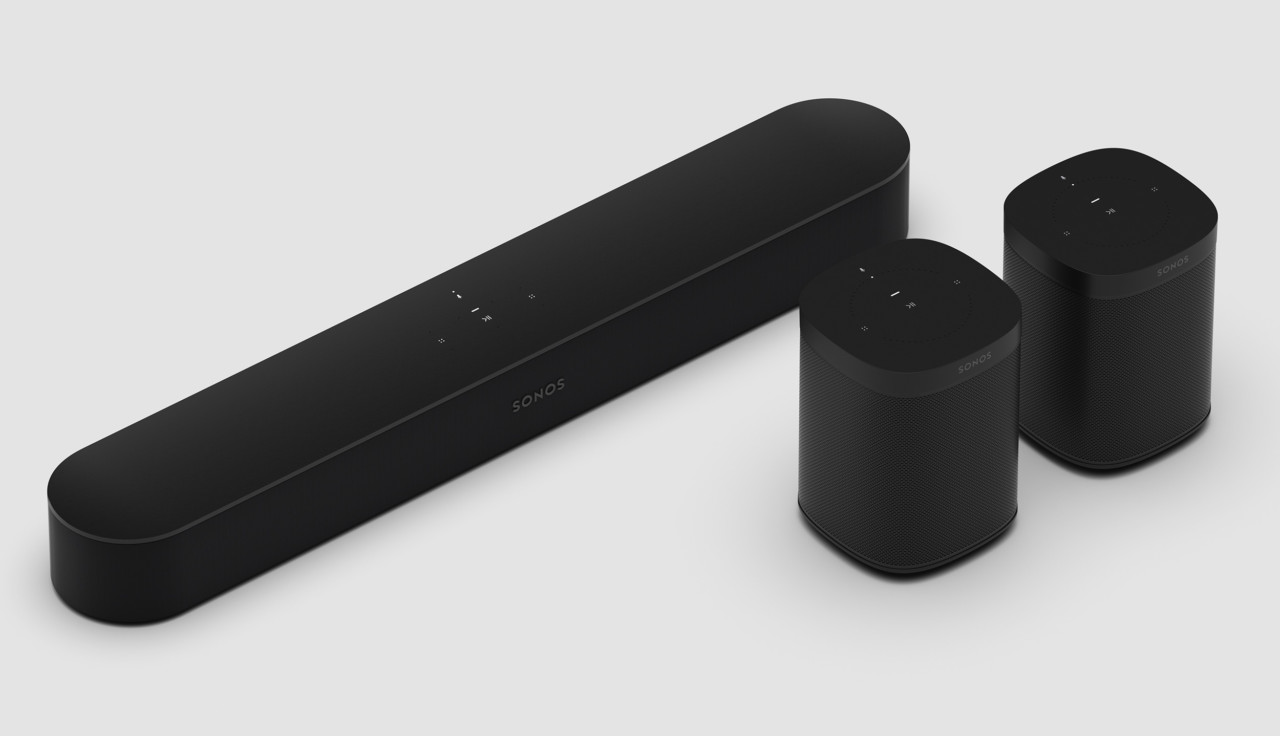 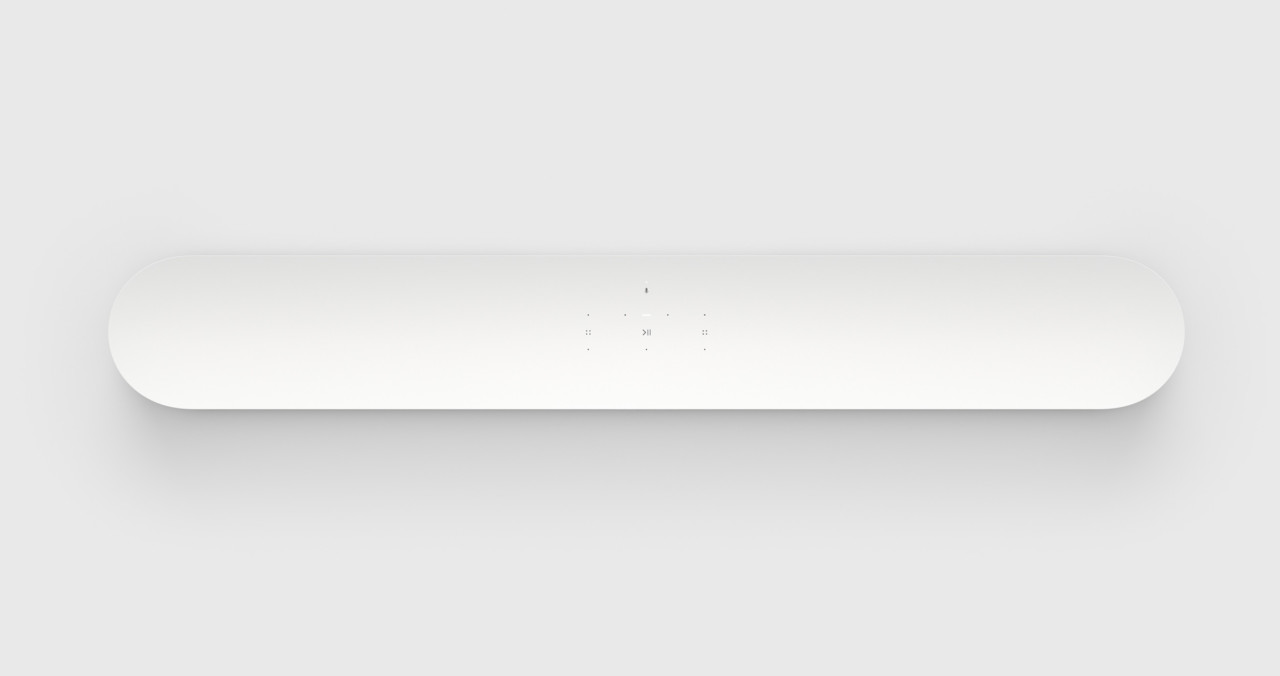 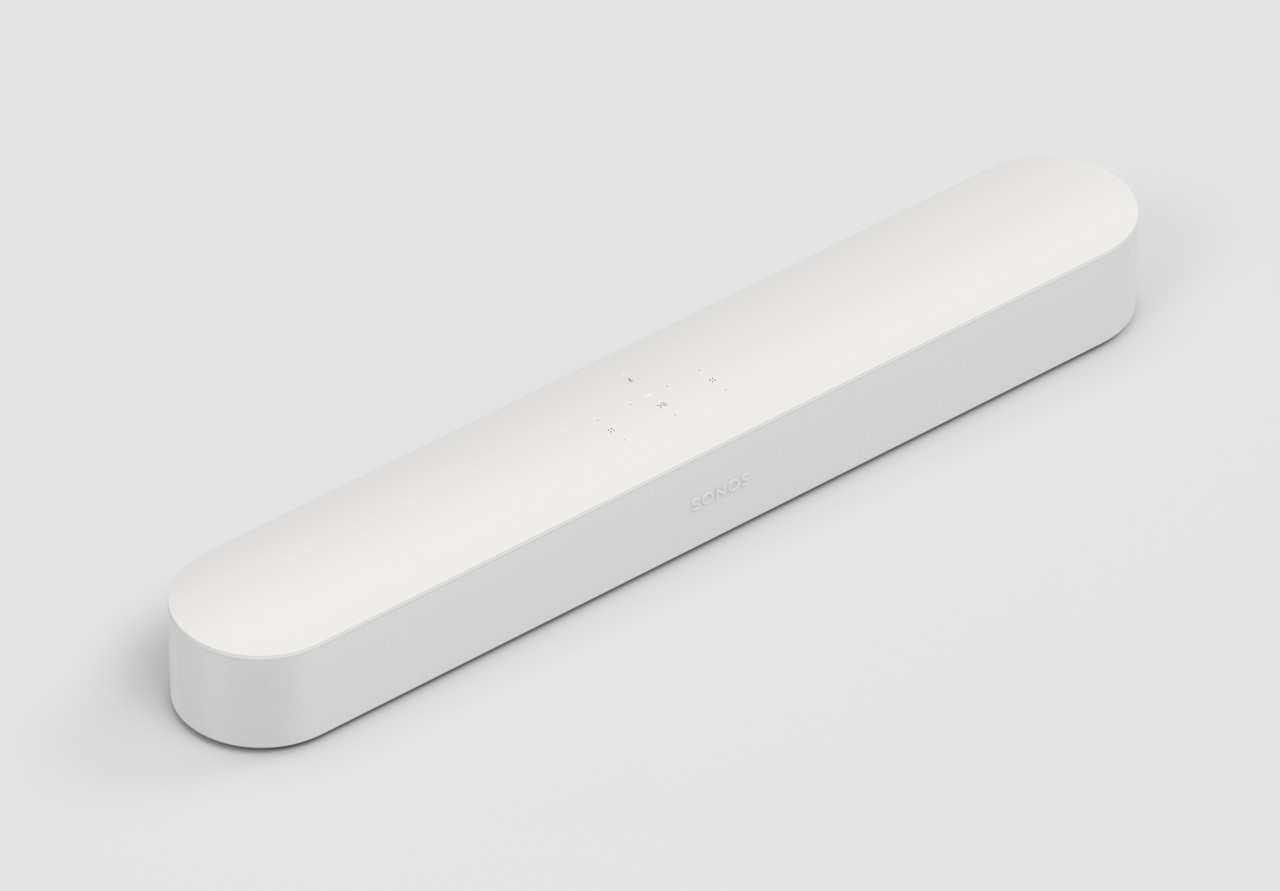 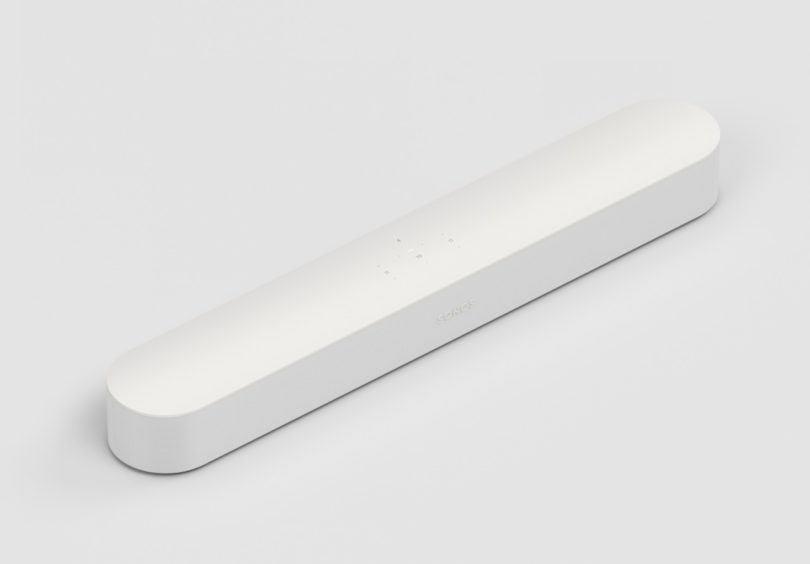 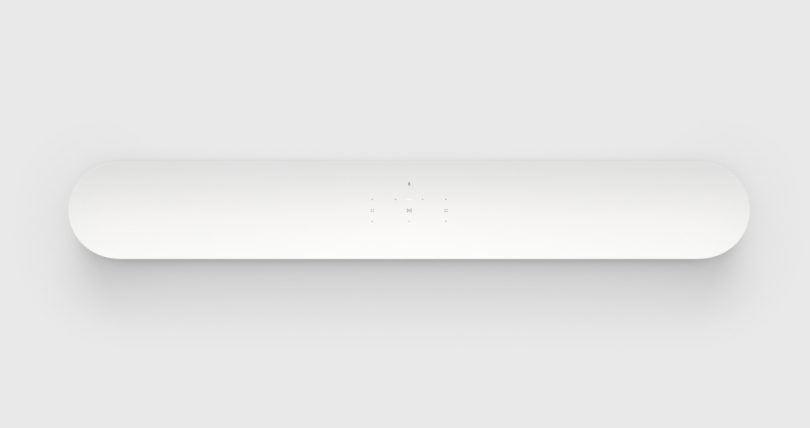 The Beam’s compact size allows it to fit easily on a credenzas or slipped under a wall-mounted television.

Compared to the lengths of Sonos’ other existing home theater offerings – the Playbar (35.4 inches) and the Sonos Playbase (28.3 inches) – the Beam’s abbreviated dimensions of 25.625 x 3.94 x 2.70 inches offers a space saving presence that will undoubtedly deliver a performance upgrade to any built-in television speaker, though at a compromise in output and separation compared to its larger siblings. Still, Sonos engineers have somehow packed in a tweeter, four woofers, three passive radiators, and five class-D digital amplifiers for 3.1 sound within an efficiently assembled design, presented with the same sedate and sophisticated design of the Sonos One and Play:5 speakers. And like those two previous designs, intuitive touch controls top the device in those instances a user might physically get up to change volume, mute, pause, or change tracks. 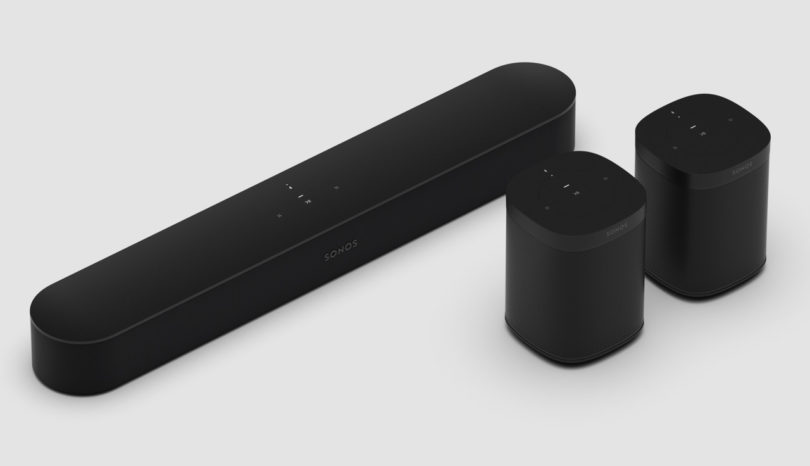 Available in either black or white, the Beam is designed to work with additional Sonos One and/or Sonos Sub to deepen immersion.

Beyond form factor, the $399 Sonos Beam’s distinguishing features are the speakers’s integrated support for HDMI-ARC port connectivity and HDMI-CEC. HDMI-ARC allows the Beam to seamlessly integrate volume controls through one single HDMI cable connection from all sources connected to the television, in turn eliminating the juggling act of additional remote controls other audio components so often introduce. The Beam’s five far-field microphones in coordination with HDMI-CEC integration brings simplified voice commands like, “Alexa, turn on the TV” or “Alexa, play Handmaid’s Tale on Hulu” when Alexa-enabled video streaming devices such as Fire TV are connected, again reducing the amount of time required to hunt for the remote control. 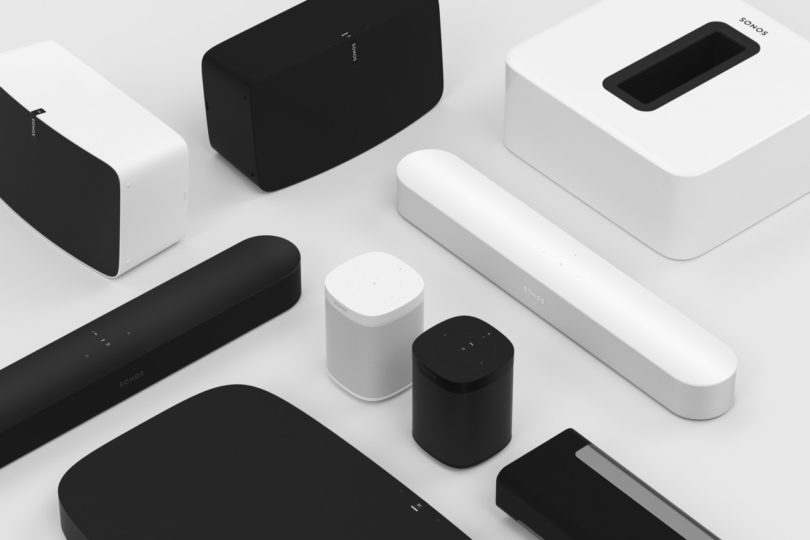 For those already invested in Sonos speakers, the Beam’s design ability to functionally and aesthetically integrate seamlessly with existing Sonos devices – hallmarks of an audio brand who seems to understand audio technology is best heard, rather than conspicuously demanding attention – is a strong selling point.

The Sonos Beam’s low profile, compact size, and agnostic compatibility with an assortment of smart assistant standards offers a compelling option for anyone desiring improving home entertainment audio performance without the larger footprint, complexity, and costs associated with a traditional home theater system – it’s a starter kit, but one engineered with plenty of room to grow. As a small space dweller, we’re looking forward to testing out the Beam in a real world setting to see whether it lives up to the proverbial belief that big things can come in small packages.

The Beam is available for pre-order, shipping next month.