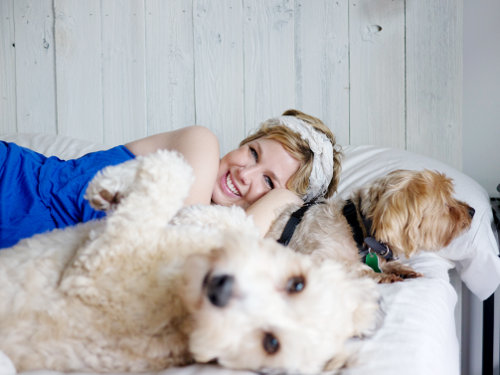 Juggling an active Internet career with writing, speaking, styling and consulting, Erin Loechner can be found daily at DesignForMankind.com, her art/design blog that was recently honored as one of the London Time?s top 50 design blogs in the world, as well as DesignForMiniKind.com, a kid-friendly sister site. She currently hosts a renovation column on HGTV.com where she catalogs her experiences as an impromptu interior designer (she’s really good, people!). Erin is also expecting her first child this July — a baby girl! To say I’m thrilled to bits to have Erin and her cutie patootie pups on Dog Milk today is an understatement. (I don’t even think it’s possible to count how many bits I’m thrilled to!) Erin is actually the first blogging peer I ever met in real life and there’s a special, sunshine-filled spot in my heart for her. BUT! Enough about my undying girl crush, let’s meet Bernie and George! Breeds? Bernie is a Yorkie Russel (Yorkshire terrier mixed with a Jack Russell – they are INSANE, beware!) and George is a soft-coated Wheaton Terrier (and a complete angel). What?s ?The Scoop?? We actually bought Bernie at a pet store because we’d tried to adopt but our Los Angeles apartment didn’t meet a lot of area agency standards. Then, a few years later, we bought a house in L.A. and adopted George from a local rescue. They’ve brought an incredible amount of joy (and laughter!) to our lives! Favorite Toy? Bernie loves anything he shouldn’t have: socks, tissues, pillowcases, mail and boxes. George’s favorite toy is a racquetball – it’s the perfect amount of bounce for such a lively boy!

Favorite Food? Bernie’s the eater of the two, and again, loves anything he shouldn’t have (his favorite being an entire dish of baked beans at a recent backyard BBQ). We like to joke that George loves love more than food – he won’t eat any meals without permission (and usually a smooch on the head!). Favorite place to sleep? Bernie likes to be in tight-knit spaces, so he loves his crate, or sometimes he’ll bury himself in boxes, under beds, in baskets and other miscellaneous locations he shouldn’t be. He’s also a bit cat-like, and will sometimes climb up on our desks and shelves to sleep there. (Can you tell he has loads of personality?!?!) George likes to sleep sprawled out on a cool, hard surface as long as we’re nearby. His favorite spot is under my office chair during the work day, so I always have to be sure I don’t roll over his paws when I get up for a break!

Pet Peeves? Their pet peeves or our pet peeves? Bernie hates to go for walks, hates grass and doesn’t like to go outside in general. He’s an odd duck. George likes absolutely everything. Our pet peeves? When Bernie steals our socks, eats Ken’s glasses and hides my zip drives. When George barks every time he hears a sound reminiscent of our doorbell (which seems to be EVERY sound.) Best Trick? Bernie can balance anything on his head if we have enough crackers to reward him with. He’s also really good at un-making our bed. George is an avid fetcher, swimmer and likes to be held like a toddler – all of which are immensely fun party tricks.

Gear? We’re pretty brand-free over here – the dogs love household items more than toys, so we’re always letting them fetch with paper towel holders and the like. Free fun for all! If your dog were another animal what animal would that be? We actually think Bernie looks and acts like every animal ever, but we’d have to say he’s sort of a groundhog: short, round and likes to bury himself in weird things. George would definitely be a goat, lamb or an alpaca.

How do you think your dogs are going to feel about a new baby? Actually, Bernie looooves babies (almost too much!), so he’ll have to adjust to the little one needing a bit of personal space, I’m sure. And George is the dopey one, so we sort of think he won’t really have any idea what’s going on regardless. ;)