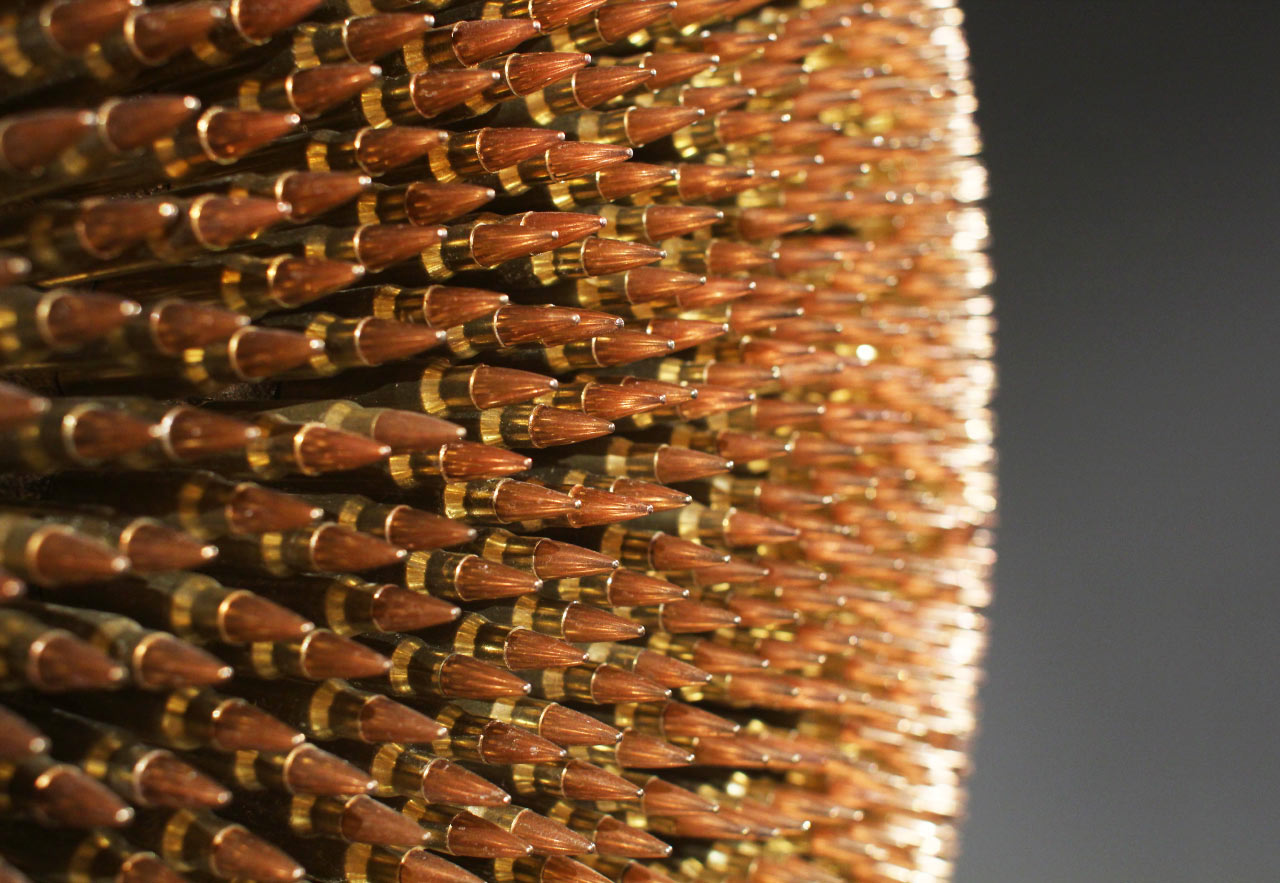 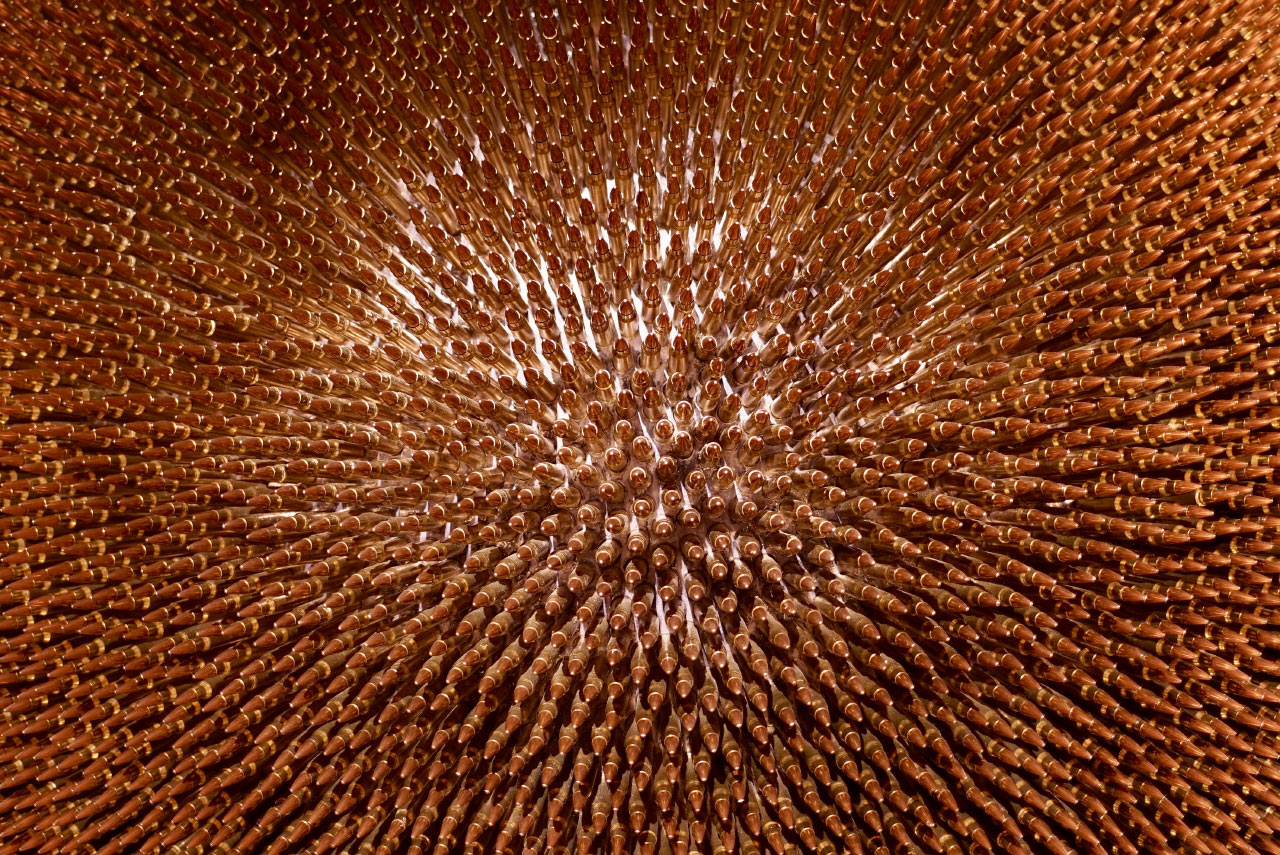 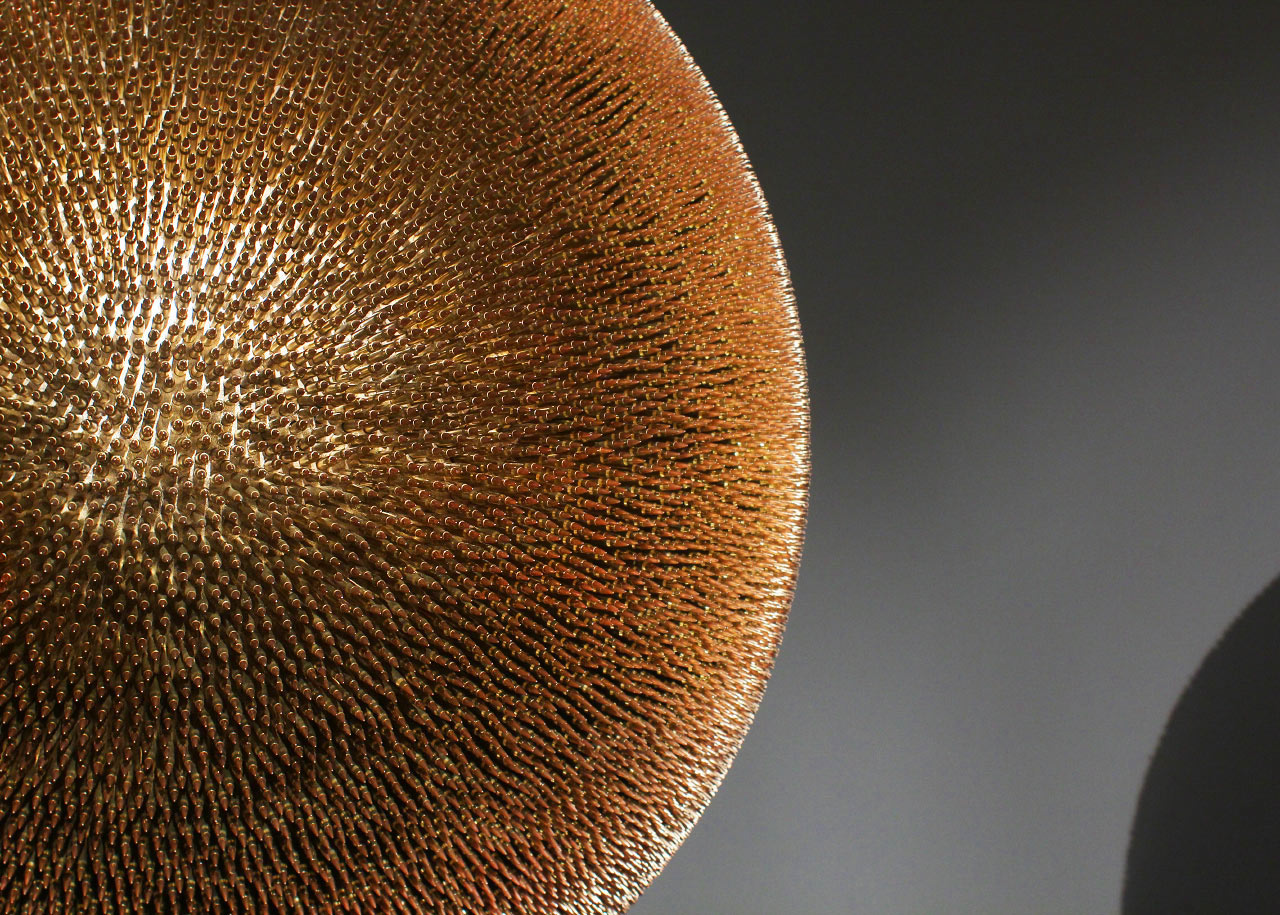 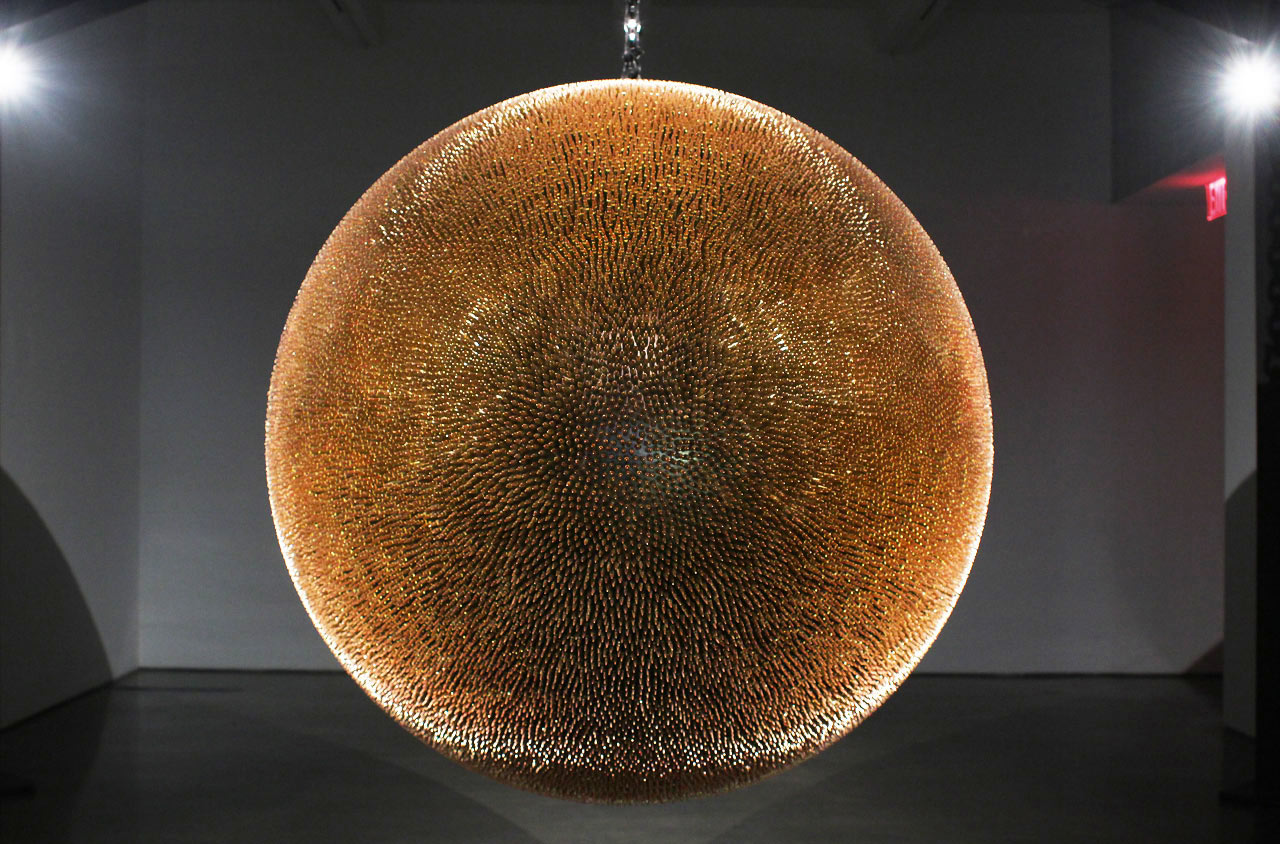 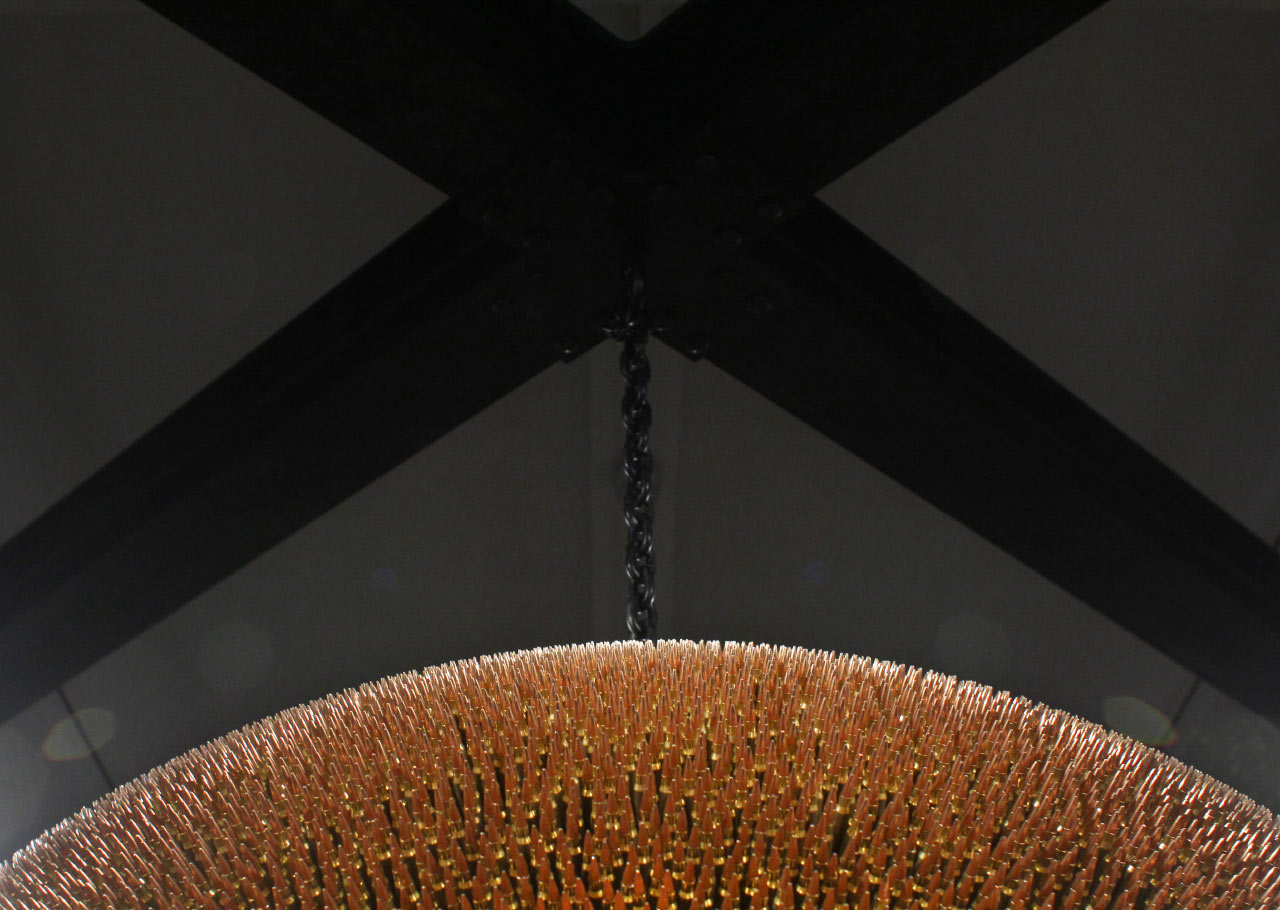 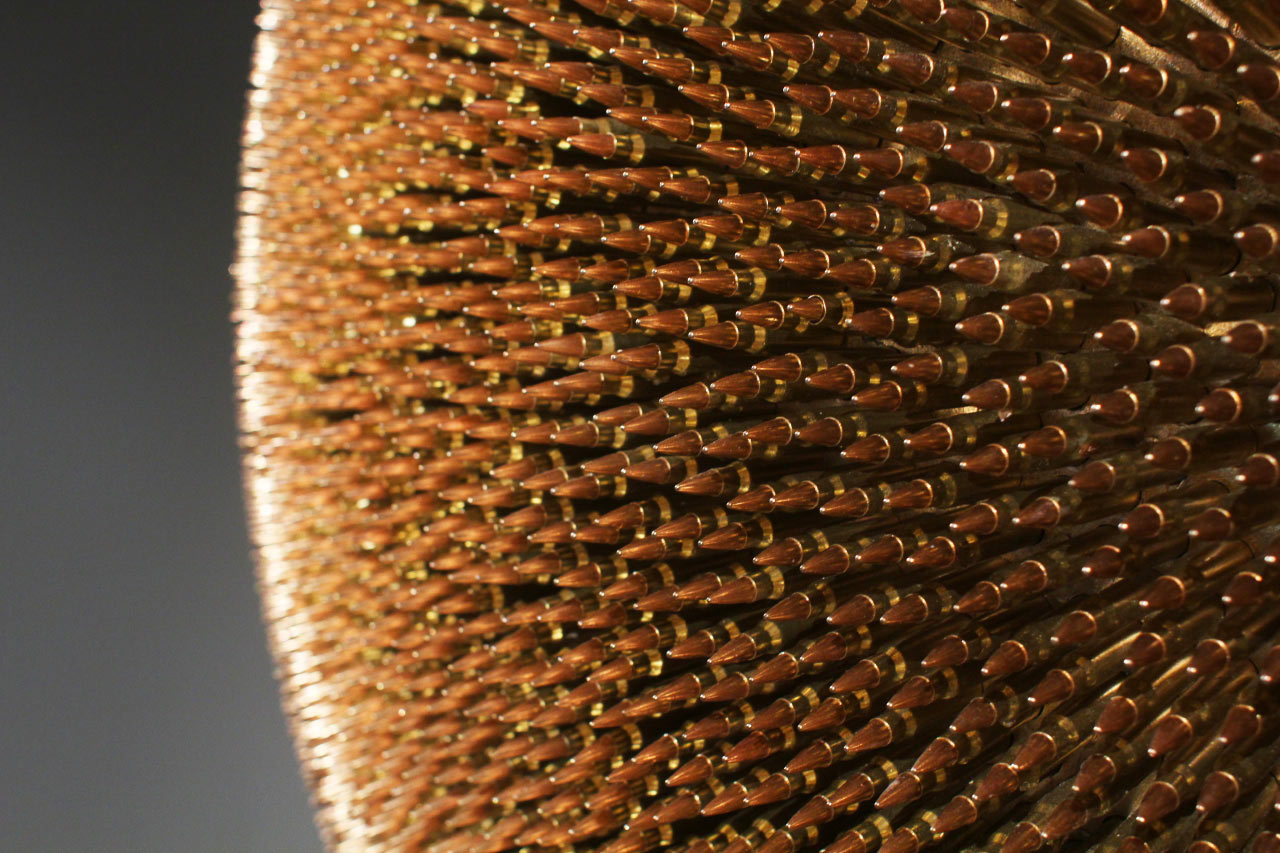 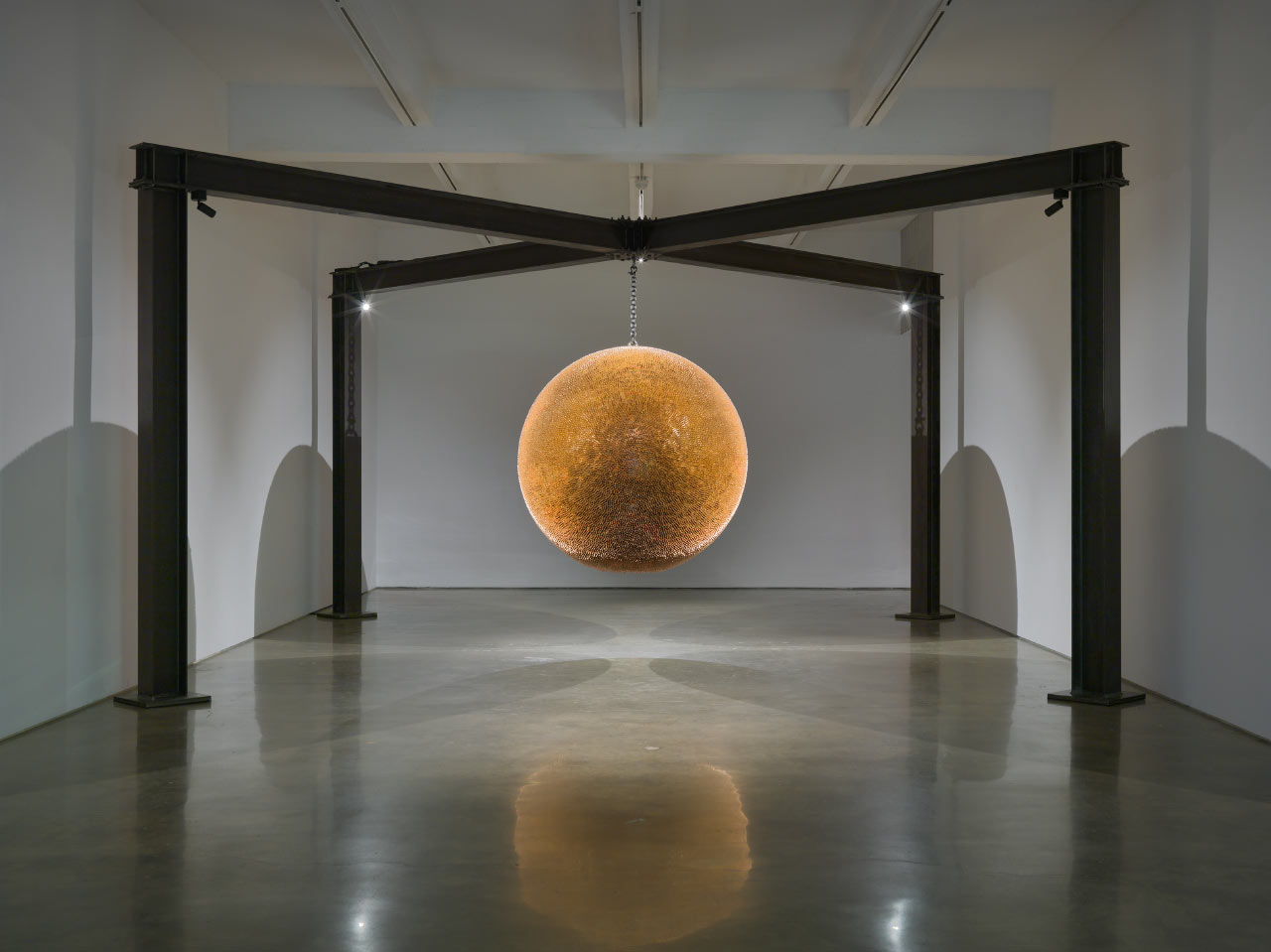 The Weight of Bullets: Sculpture by Robert Longo
1/7 Photos

Great art uses beauty as a tool to show us the ugly.

Artist Robert Longo is already in the art history books for unbelievably realistic charcoal drawings of intense imagery – from massive crashing waves to contorted “Men in Cities”.  His newest work, on view at Metro Pictures this month, is a rare detour from his signature two-dimensional medium. A single sculpture titled “Death Star 2018” covered in 40,000 bullets hangs in the middle of the gallery. Measuring over 6 feet in diameter, it weighs 3,800 lbs. 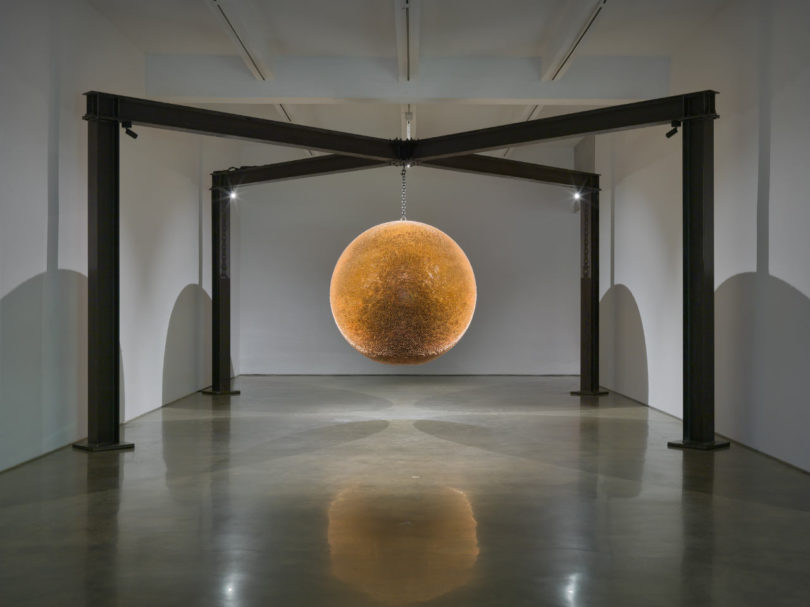 Longo is unflinchingly direct with his art and his words and is a master of balancing his often-grave subject matter with sublime beauty and extreme precision. In Longo’s own words, “You don’t want to preach, you want to seduce.”

Though visually spectacular, “Death Star 2018” holds a gut-churning representation of life in America today. Every bullet represents a life lost to gun violence in the United States. It’s an “update” to his 1993 work by the same name, which held less than half the bullets (18,000 bullets). 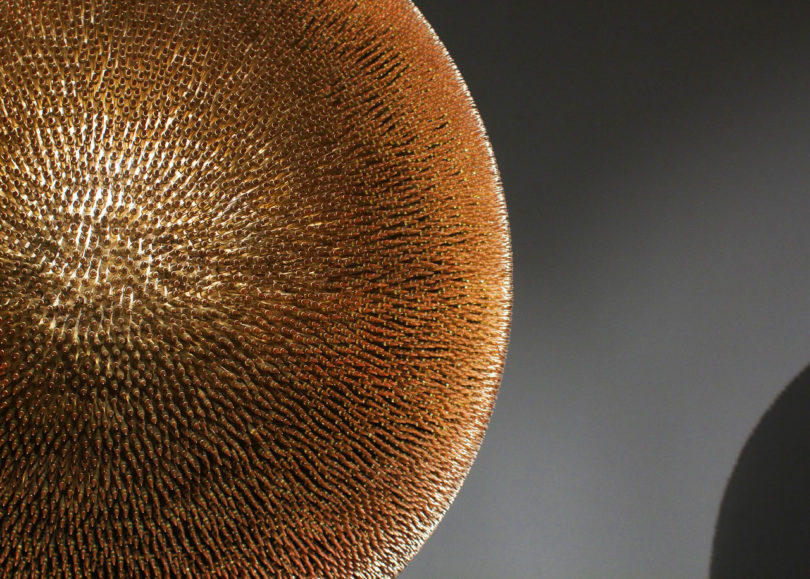 A video on the gallery’s website shows the high-tech fabrication process with interview clips from the artist and founder of Neoset Designs in Brooklyn, Kostas Papalexious. The following are a few of the most surprising parts about that process from the 6 minute video (which you should watch in full here). 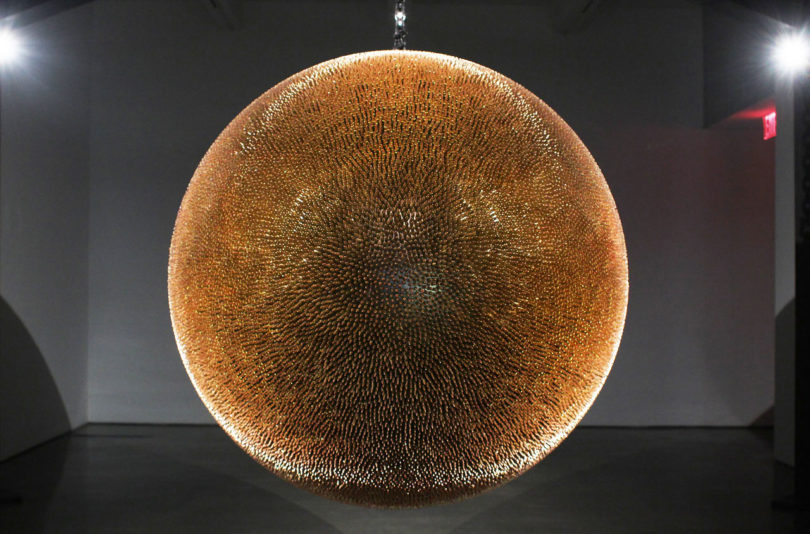 On the necessity of machine-carving the sphere:
Longo: “The machine aspect of this is really quite important to me, the precision of it is really important.”
Kostas: “A sphere is either a sphere or not a sphere. Period. At that scale, the slightest little imperfection would just be so obvious… The accuracy tolerance that we were given was sub-millimeter.” 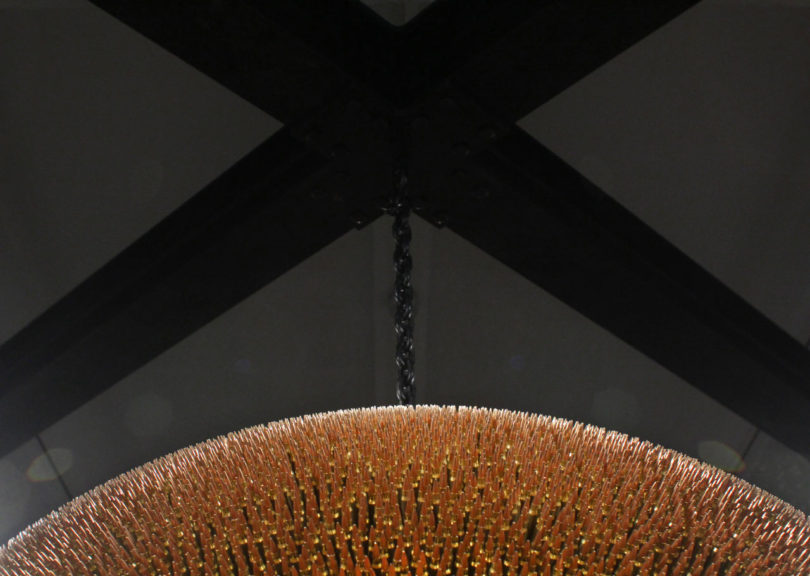 On the chain that holds the 3,800 lb sphere:
Longo: “…it has to be a chain [holding the heavy ball]. There’s a great song by Nick Cave where he talks about a 10-ton catastrophe on a 60-pound chain, that’s kind of what gun violence is like. I want you to have the feeling that the ball could fall at any minute and roll over and crush you too.” 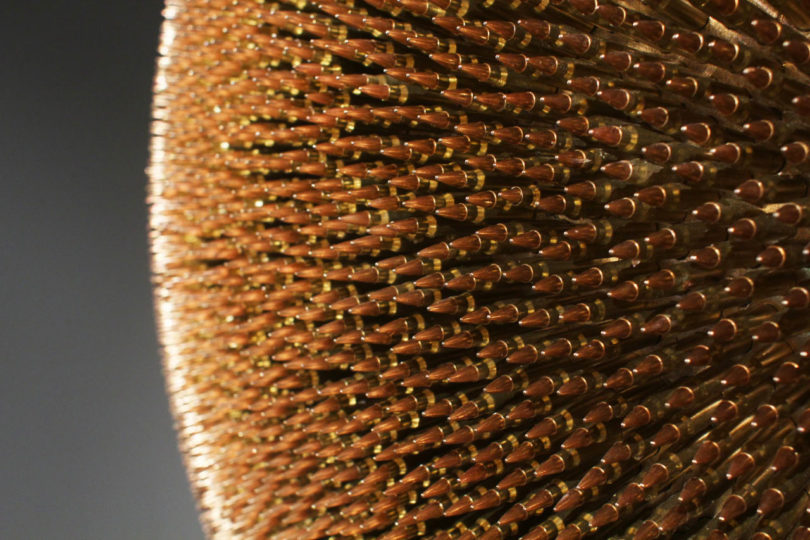 On avoiding patterns:
Longo: “We spent an enormous amount of time on this ball trying to eliminate patterns [in the bullets]. We worked with this young man, Alejandro, who worked for NASA on the military… I drove him nuts but he came up with so many variations of random patterns so when you look at it you don’t necessarily see a pattern. Which makes it so your eye is not comfortable. I would hope it will encourage you to move around it.”

(Watch the full video and see the whole process here.) 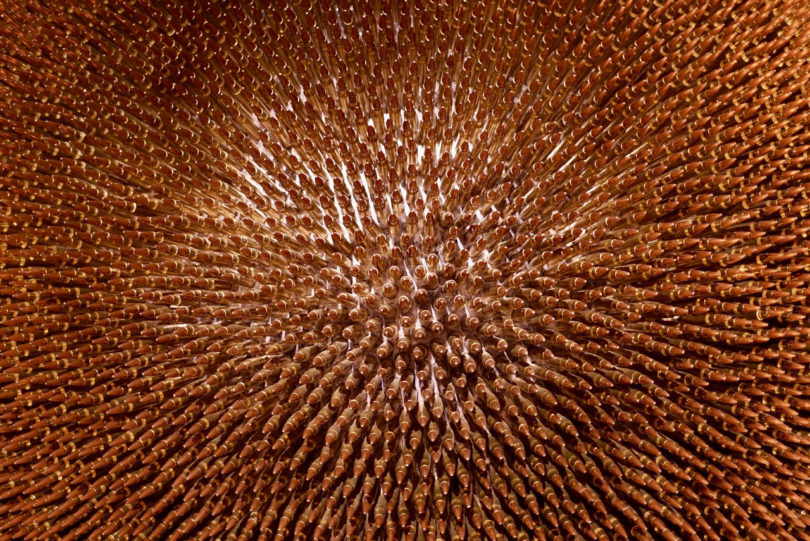 “Death Star 2018” is a collision of seductive beauty and a tragic reality. It balances a statistic that’s difficult to see with a level of visual fascination that seduces every visitor to get closer and stay longer.

My favorite element however, is the small sentence at the end of the press release: “20% of the proceeds from the sale of Death Star 2018 will be donated to Everytown for Gun Safety”. Well done.

All images courtesy of the artist and Metro Pictures, New York.

David Behringer visits over 200 galleries every month to uncover and share the most exciting contemporary art in New York today. Subscribe to his exclusive weekly newsletter at www.thetwopercent.com and learn about his private gallery tours. And be sure to check out his YouTube.