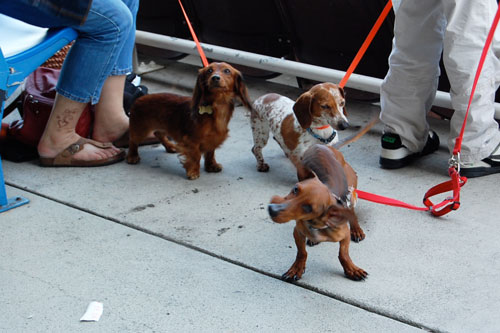 Last weekend I had the privilege of attending Golden Gate Field’s Annual Wiener Races presented by Pet My Wiener. Every year Dachshunds from all over the San Francisco Bay area are invited to compete for one thousand dollars in cash prizes and the sought after title of the fastest Dachshund in the Wiener Nationals. Believe me, this event was every bit as charming as it sounds! In total, 108 Dachshunds competed in 10 heats for the coveted prize. Each racer brought with him/her two participating owners, one to start the race with, and one to holler and jump at the finish line.

Naturally, I was there to support my Oakland dogs, though I have to confess, my heart was stolen by so many others. And it wasn’t just the dogs I found so captivating. The dog loving attendees were just as much fun to spend a gorgeous afternoon with. I had the best time laughing at every “wiener” joke I heard. How can you go to a wiener race without hearing phrases like, “Aw, look how tiny that wiener is,” “OMG, that is one fat wiener,” “how often do you exercise your wiener,” and of course, “may I pet your wiener?” The races were amazing, but the crowd was something else! Proud owners made t-shirts and posters to support their racers. They had fun dressing up their dogs and had just as much fun dressing themselves up. Some were first time racers while others boasted about training for the event year round. But what was most evident in everyone was how much they loved their special dogs. And while there were some actual winners that took home prizes that day, I kind of got the sense that every dog there felt like a famous wiener (sorry, old habits die hard). If you live in the San Francisco Bay area, I highly recommend attending next year!