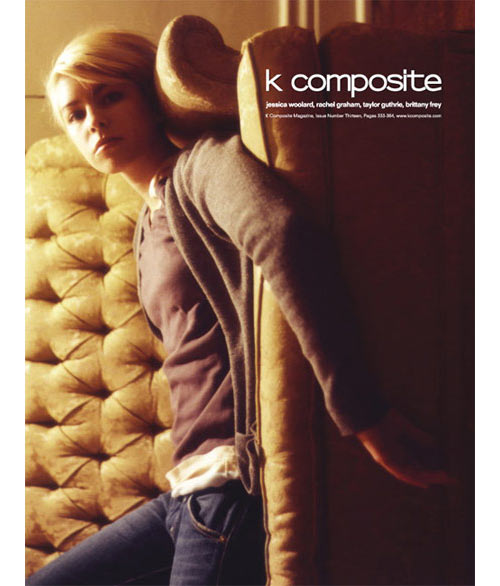 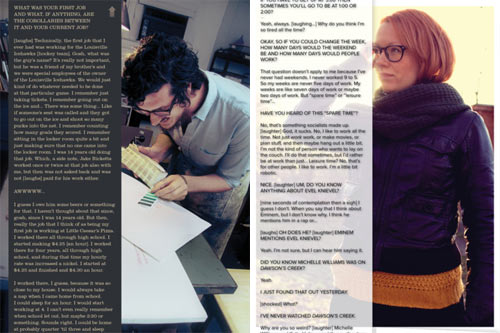 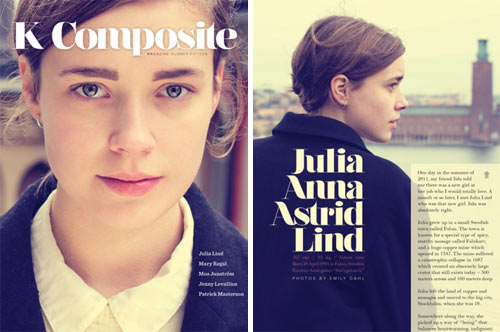 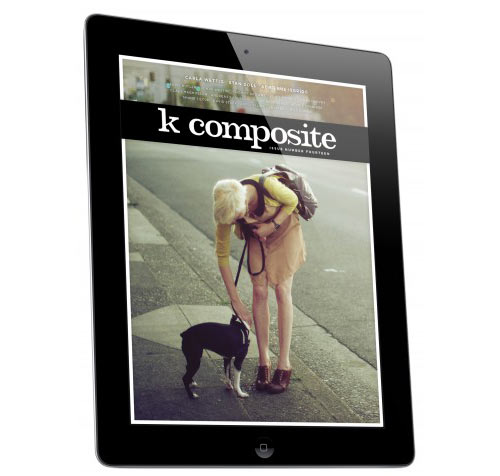 Scott Ritcher launched his now digitally glossy mag, K Composite, back when Macs were used mainly at Kinko’s, rented by the hour, and cameras still involved film. Essentially, it was a photocopied fanzine in which he featured interviews with his friends. While the medium has morphed, Ritcher’s vision remains razor sharp. Today, from his home base in Stockholm, Sweden, this Louisville, Kentucky-born Renaissance guy continues to construct honest portraits of everyday people.

Did you grow up in Louisville? When did you make your way to Stockholm?

Yes, I was born in Louisville and lived most of my life there. I have been living in Sweden since 2009. I discovered Stockholm in the ’90s while on tour with my band Metroschifter. I loved it immediately, though it took me a while to decide I wanted to move here. For someone who loves design and beautiful things, Stockholm is like a candy store. The architecture, the magazines, the clothes, the everyday objects, and the way the people take pride in the details. It’s an amazing place. Louisville is fantastic in completely different ways. I try to make it back to Louisville for the holidays or for Kentucky Derby in May. That’s when all relocated Louisvillians return to the roost.

I don’t have any formal design training; I learned by doing. I started designing out of necessity in the ’90s when I needed catalogs, flyers, and covers for my record label. During those years, Kinko’s copy shop was my second home. You could rent a Macintosh by the hour. I was a punk rock kid pulling all-nighters. I first got my hands on one around 1988. I basically used it as a typesetting machine; image scanning was still a few years away. Eventually people asked me to design their record covers or logos. Soon, design had become my profession.

You’ve done a lot of different things — played guitar and sang in a punk rock band, ran for mayor, founded a magazine. Is there a common motivating factor in your endeavors?

I think there are two: I do things that I enjoy, and I do things that I feel should be done, but that no one else is doing. With the band and the magazine, I felt that people making music and publishing magazines weren’t creating unique material; I didn’t find their stuff interesting.

These were definitely motivating factors in my run for Louisville mayor in 1998 and for Kentucky State Senate in 2008. Louisville is a nice city, but many people in Kentucky need a lot of help. I think that state lawmakers simply can’t be bothered with doing their jobs. Running for office is a full-time job requiring a lot of time and resources. I was in a position to try it, so I did. That’s the short answer. I’ll spare your design-minded readers the entire political saga. Let’s just say that I’m glad I did it and will never regret having stood up.

Any words of advice to people who hesitate to try new things?

This is easy. Next time you and your friends come up with a great idea, saying, “Wouldn’t it be cool if…” get off your dumb ass and do it. Take the idea and make it happen. Now!

My mother sometimes worries about the risks I take. I tell her, “You can worry about what might happen, or you can make things happen.” If we’re not doing something valuable with our time, then why are we here?

What prompted you to start a magazine that features interviews with everyday folk?

When I started it in 1991, during my punk rock and Kinko’s years, it was a Xeroxed fanzine. There were dozens of zines, but they were all exactly the same — record reviews, interviews with bands, and pictures from shows. With the power of the Macintosh and the crazy new “desktop publishing,” there was no reason for everything to look shitty. So I set out to make a good-looking zine about things I was interested in — my friends. The punk zines were filled almost entirely with pictures of sweaty dudes screaming, so I went the opposite direction and made a special point to interview girls as well.

If you had to interview somebody well known, who would it be?

This is a tough question because even when I have interviewed people who might be “known” in some circles, I have gone out of my way to avoid the topic of whatever they’re known for. Sometimes it’s unavoidable, like with my friend Moa in issue #15 because filmmaking is so much of who she is. As a general rule, if I’m interviewing someone who is in a band, I don’t ask about his or her music. It’s like interviewing Evel Knievel and talking about everything except motorcycle stunts. That’s how you really get to know people.

I think this is what has made Howard Stern and Mike Wallace master interviewers. It would never cross their mind to ask, “What was it like working with James Cameron?” Everyone has heard that a million times and nobody cares anymore. As Don Hewitt used to say, simply, “Tell me a story.”

But to answer your original question, I would love to talk with Jerry Lee Lewis if he was relaxed and open. Steve Martin too, if it were a comfortable off-the-record conversation. I find both fascinating, but because they are “on” 24-hours-a-day I don’t think I’ve ever seen or read a truly honest, uninhibited interview with either of them.

Where do you find your subjects? Do you know them all?

Most are my friends, though there are also a number of interviews that have been conducted by my friends, of their friends. After I publish an interview with a friend, I invite them to interview someone he or she knows, and I collaborate with them on the process.

I’m working on a couple of interviews now with people I had never met before the interview. There is a fantastic photographer I work with in Stockholm named Emily Dahl. I asked her to recommend friends of hers who she thought would be good interviews. Now I’m in the process of interviewing two of  her friends!

Do they have to meet certain criteria? Is it driven by a set of rules?

Yes and no. I mostly go on a feeling or hunch. Sometimes I know that a particular person is really funny, or has a unique perspective, or tells great stories. Sometimes I might be curious about someone’s life. Other times I just want to put someone through the ringer, like when I’ve interviewed my ex-girlfriend Adrienne in issue #14.

People have a never-ending appetite for the minutia of movie stars’ lives. Did you worry that readers might not be interested in the tidbits of everyday people? What made you think they would be?

Ha ha. Um, I have never had any illusions that people would want to read about my friends or other strangers. When some of the early Xeroxed issues were featured in Rolling Stone, Harper’s, and Sassy, I was flabbergasted. It makes absolutely no sense at all. I have found that there are some people who enjoy K Composite a lot and are obsessive about it. Most people either like it a lot or they’re just not interested.

I think people who enjoy documentary films or reality shows tend to like K Composite. The magazine provides a window into the lives of strangers. And the interviews are more honest than most others, since ours are conversations between friends This allows for a huge level of comfort. Also, compared with typical talk show interviews, the subjects in K Composite are not selling a book, or hoping you’ll see their movie, or come to their concert. They’re just talking; there are no ulterior motives.

This question could be analyzed every which way, but the truth is, I am still just making a magazine I want to read. I’m really glad that other people want to read it too.

Do you have different types of people in mind you’d like to interview? Like, say, a clown, or a basket weaver?

Hmmm… How about a clown who weaves baskets?! No, I’m not on the hunt for particular occupations or types. Wait, is the clown cute? Ha ha!

Do you find yourself adjusting the way your interview people, questions you ask, etc. now that you’re digital? Are you tempted to include more questions or rambling answers?

I don’t think the interviews themselves have changed, however, now I can publish more of the conversation and feature more images. When I was publishing on paper, I generally split the interviews in two — half were published in the printed magazine and half were published on the website. The most recent print issues were each 32 pages, with only 8 pages in full color. On the iPad, of course, every page can be in color. There’s no cost difference between making a 32-page magazine and a 200-page magazine. However, I’ve actually found that I really like the length to be about 32 pages.

What about from the visual standpoint? Any changes with the iPad edition versus print?

Migrating the magazine to the iPad has given me the opportunity to create a much nicer product, but at the same time it brings new challenges. It has had a huge impact on the quality of photography. The iPad’s screen — even the non-Retina version — doesn’t hide anything. The photos need to be even better than are on paper. That said, I don’t have to worry about paper quality, ink saturation, color registration, pages torn in shipping, the list goes on. Since everyone is reading it on an iPad, I can see the exact finished product before it is published, and I can tweak the smallest details up until a few minutes before it is published.

Thanks to the Mag+ design tools I’m using, the magazine has multiple sliding layers, can be read in portrait or landscape modes, and can have sound and video. If someone I’m interviewing makes a ridiculous sound that just can’t be transcribed in text, the reader can tap the highlighted words to hear a sound clip. A perfect example is Carla Wettig’s interview in issue #14, when she imitates computer sounds.

My friend Julia LInd is remarkable. She’s on the cover of K Composite issue #15. I could talk to her and see pictures of her all day. Unfortunately we have jobs. And she has other friends, too!

I check the blog of Swedish photographer Jessica Silversaga pretty much every day I love her images and clothes. I’m trying to talk her into an interview.

Finally, we must ask: What’s your favorite Atari game?