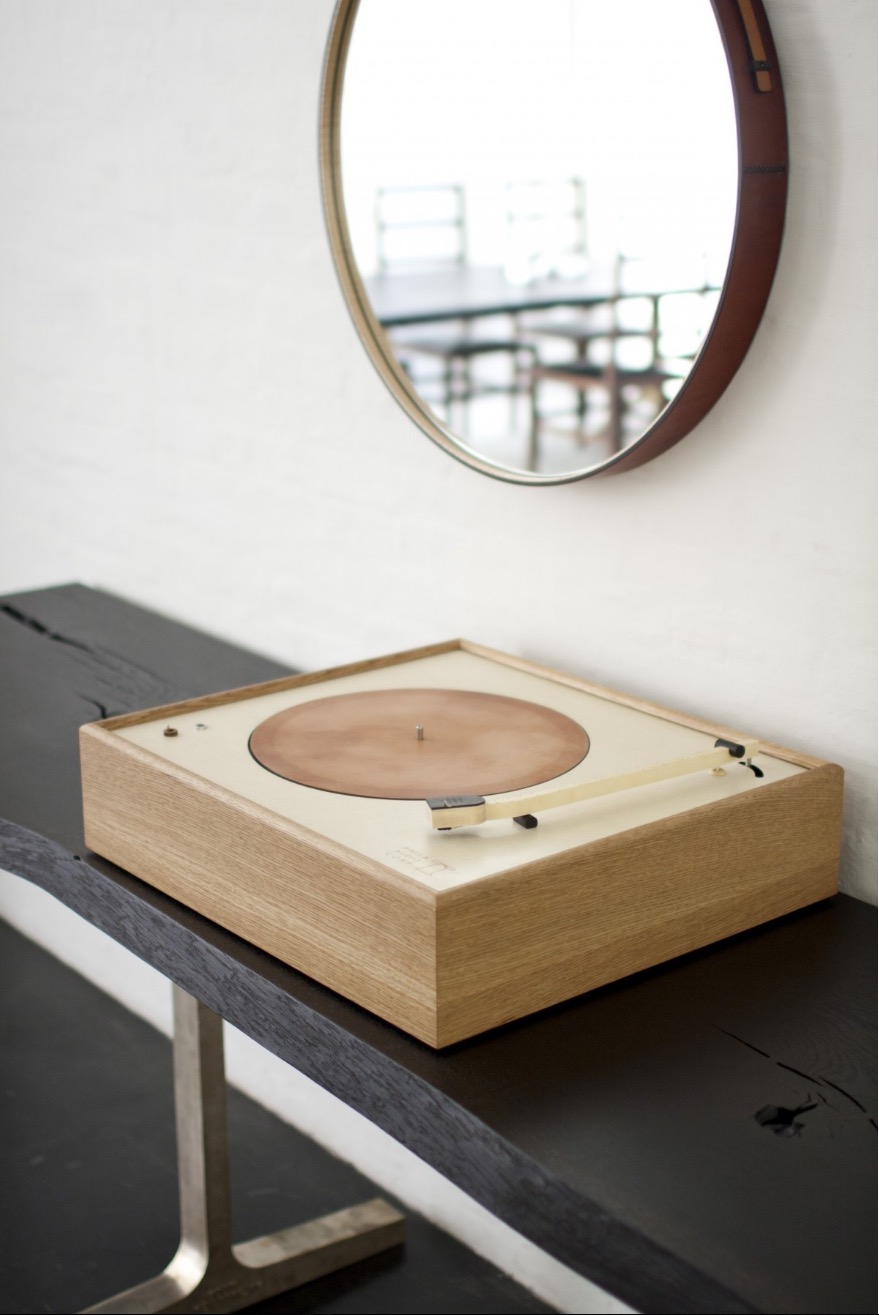 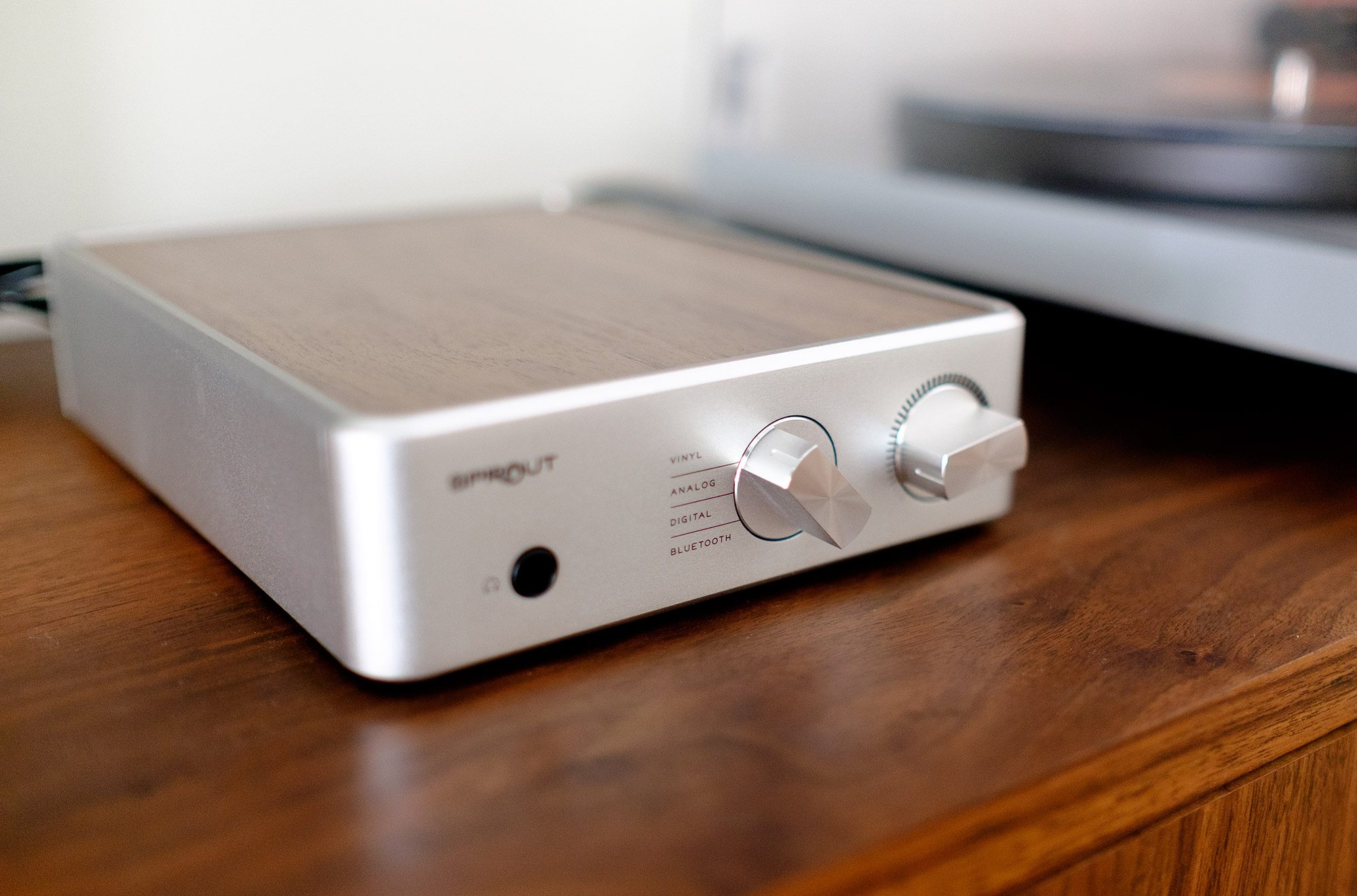 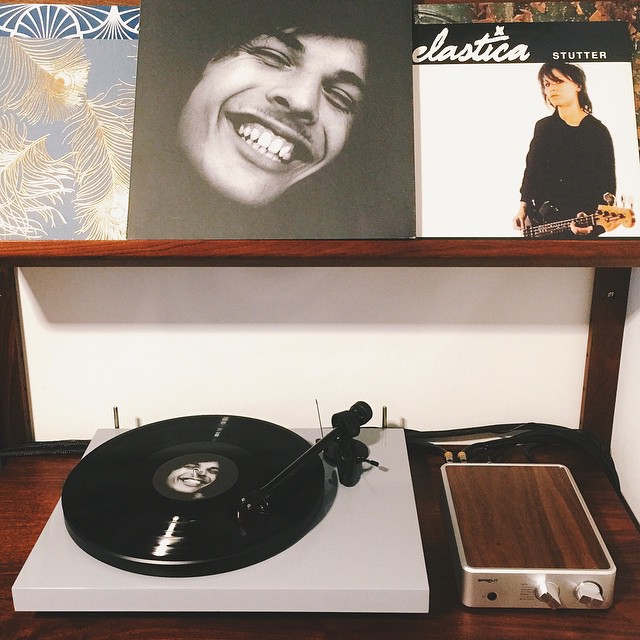 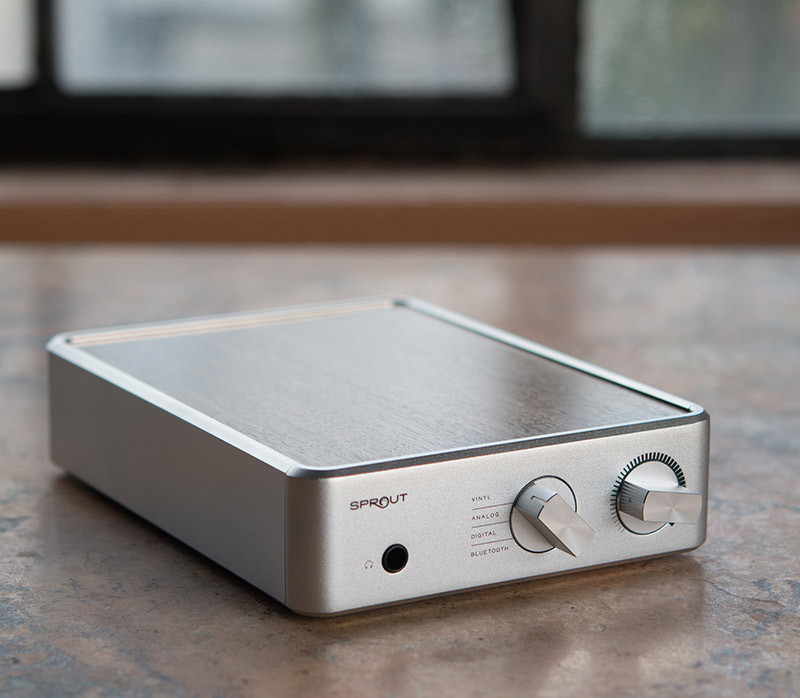 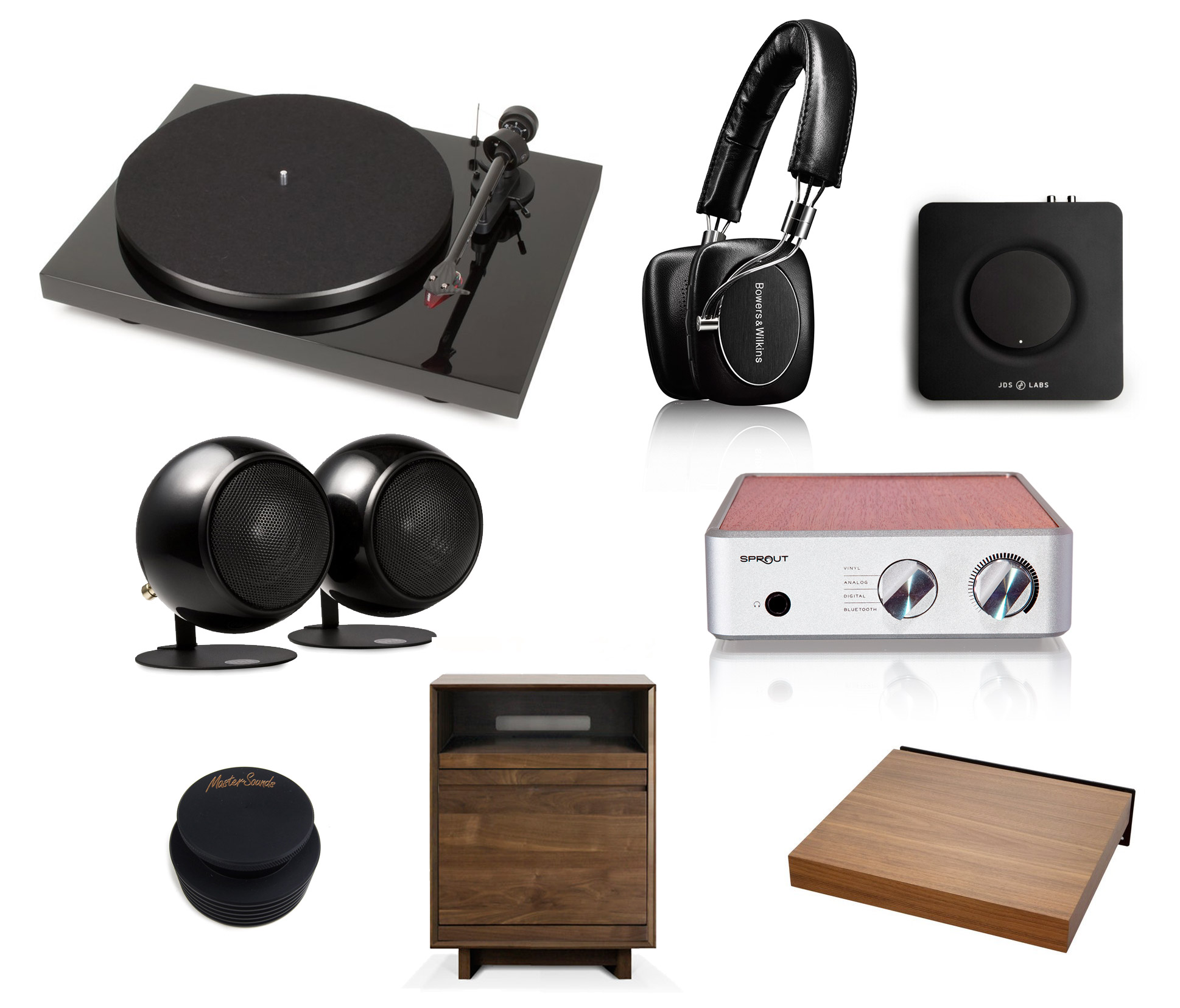 With just two dials and a single headphone input, the front of the Sprout presents an uncluttered and simple to use interface.
2/5 Photos

A work in progress.
3/5 Photos

It’s funny how occasionally a single image can spark an ember of obsession, which can quickly turn into a full-blown blaze. Such was the case when I saw this one-off handmade turntable by furniture designers, BBDW.

The design is elegant, a wood adorned cousin of the classic Dieter Rams era Braun-branded audio pieces which established the audio gear as much design object as audio component. As I pined after this unique design, I realized I was missing not only the aural and tactile experience of listening to records subtracted from my usual digital playlist listening sessions, but also the physical presence of the turntable itself. Years of hip-hop, soul, British pop, and even a few metal records sat dormant in storage awaiting a revisiting.

Thus, I decided to jump back down the rabbit hole of turntable ownership again and began piecing together a wish list of audio components that would fit the requirements of my budget budget (writer’s salary), limited space (at under a 1,000 square feet, our home didn’t require anything too powerful), and aesthetic considerations (of course!). 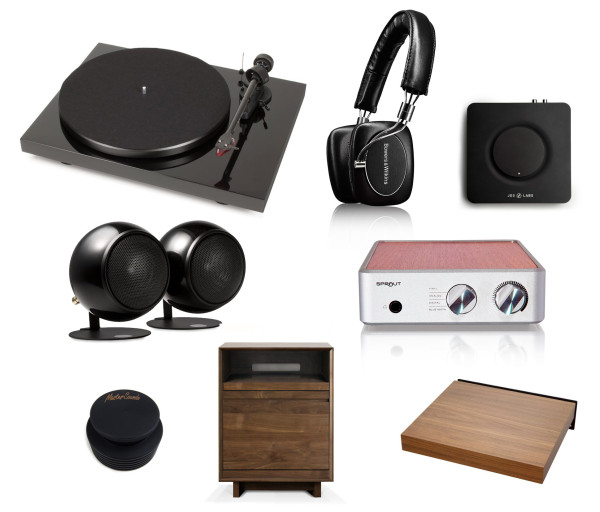 I should preface that for years a Jacob Jensen designed Bang & Olufsen Beomaster 2002 and Beogram 4004 turntable setup served me well, purchased from a retiring Playboy magazine executive here in Los Angeles before his departure to the outlying desert. The system was a joy to listen to for years, until a year ago when a series of events related to moving, poor wiring in our 1930’s apartment, and the age of the system itself eventually led to some component failures. The cost of repair and the rare DIN plug cabling connecting the components made upgrading a challenge, and so now the system primarily sits here as a beloved museum piece until time and funds permit revitalizing the B&O system from disrepair. Thus, I had an opportunity to start from scratch.

In relation to other home electronics, the turntable market has an unusual percentage of aesthetically pleasing components which can proudly sit in a room in-between listening sessions as design objects; it’s where I would be inclined to begin when plotting out a record listening system. But this time I decided it was going to be a more functional component which would be the foundation of my audio system… 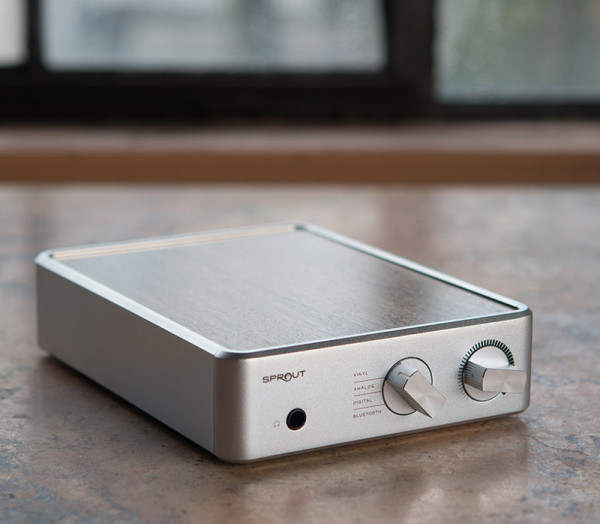 PS Audio Sprout: I knew I was starting on the right foot when I found an amplifier seemingly designed specifically for the segment I represented: a design-minded customer who wanted to upgrade to entry-level audiophile components. I knew I wanted something small, yet sufficiently powerful and flexible for a variety of sound sources, whether it be a turntable, a laptop, or streaming wirelessly. When I noted PS Audio’s literature made mention of both Braun’s Dieter Rams and Apple’s Jony Ive as guiding inspiration for their user experience, it was apparent this audiophile company had factored in design prominently into their plans. 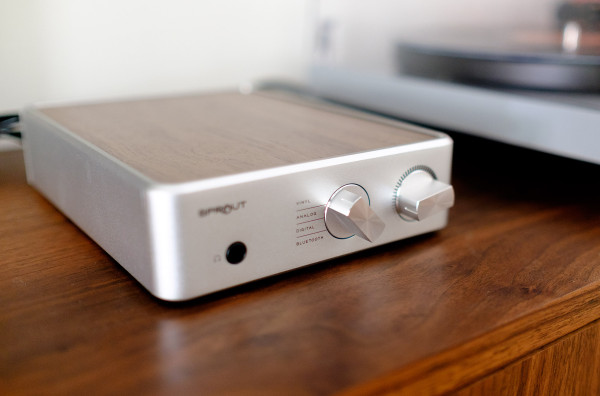 With just two dials and a single headphone input, the front of the Sprout presents an uncluttered and simple to use interface.

That the Sprout only has two dials – one for volume, the other for switching sources – made this minimalist amp a refreshing option when compared to the myriad of button, lights, and dial laden audio components normally presented. Interest was further fueled by the Sprout’s friendliness with USB, coaxial input, and Bluetooth streaming sources, meaning when opportunity required switching from records back to my Spotify playlists, the option was only a few dial turns away. There’s also something telling the top input states “vinyl” instead of the usual “phono”, a nod to the younger turntable market vernacular. 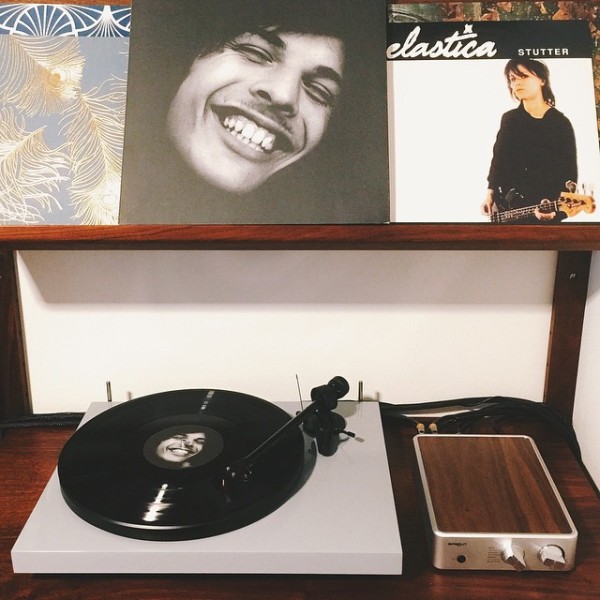 A happy work in progress.

PS Audio was kind enough to send a review unit on loan and I’ve been listening to their Sprout using a Pro-Ject: Debut Carbon DC Turntable with a pair of KEF T-Series home theater speakers I had laying around (after failing to get my intended pair of 1979 Beovox S25’s working again). Even though the speaker pairing isn’t ideal (and temporary), in a small room the Sprout and Pro-Ject partnership performed to my ears (and eyes) liking satisfyingly enough I knew I could happily live with this diminutive piece of engineering (at just 2.9lbs it could be honestly be labeled a portable device). I found my experience similar to Audophilia’s Karl Sigman’s, impressed with the Sprout’s decathlete versatility, and its handsome walnut veneer and metal finish which underlined the Sprout’s design philosophy:

“We spend a great deal of time interacting with our machines,” said Sprout’s designer, Scott McGowan, “But those that bring music into our home are personal and I did not want to lose touch with that that brings music into our homes. I wanted to touch, to feel, to interact with Sprout. Sprout is audio furniture. It’s personal. It has to be touchy feely.”

Scout’s designer Scott McGowan said he was so committed to this back-to-the-basics listening experience, he decided to forgo integrating a remote control into the Sprout design. A tactile (re)connection between listener and equipment is established upon severing this common convenience, similar to the physical requirement of flipping a record to listen to the other side. I’ve occasionally enjoyed streaming audio from my laptop to the Sprout via Bluetooth – which works flawlessly – but as intended, the real joy thus far has been lunch break listening sessions with the dial turned to “vinyl” with a copy of Soul Jazz Records’ Studio One Ska Fever. 90’s Brit Pop, or Chromatics tune spinning.

At this point I’ve got the makings of a very capable and affordable system with the Sprout amp and Pro-Ject turntable in my starting lineup. Arguments and options will undoubtedly be professed, as everyone seemingly has opinion as what is the “best” when it comes to piecing together an audio system, and one with design and space at the forefront. The KEFs are fine for now, but I’m leaning toward adding a pair of compact-yet-capable Orb Audio Classic One loudspeakers, a fitting pairing considering both amp and speaker focus on small size and thoughtfully executed design without (too much) performance compromise. I’ll report back soon how this speaker switch out integrates into my plans for the perfect (for me) turntable listening system…