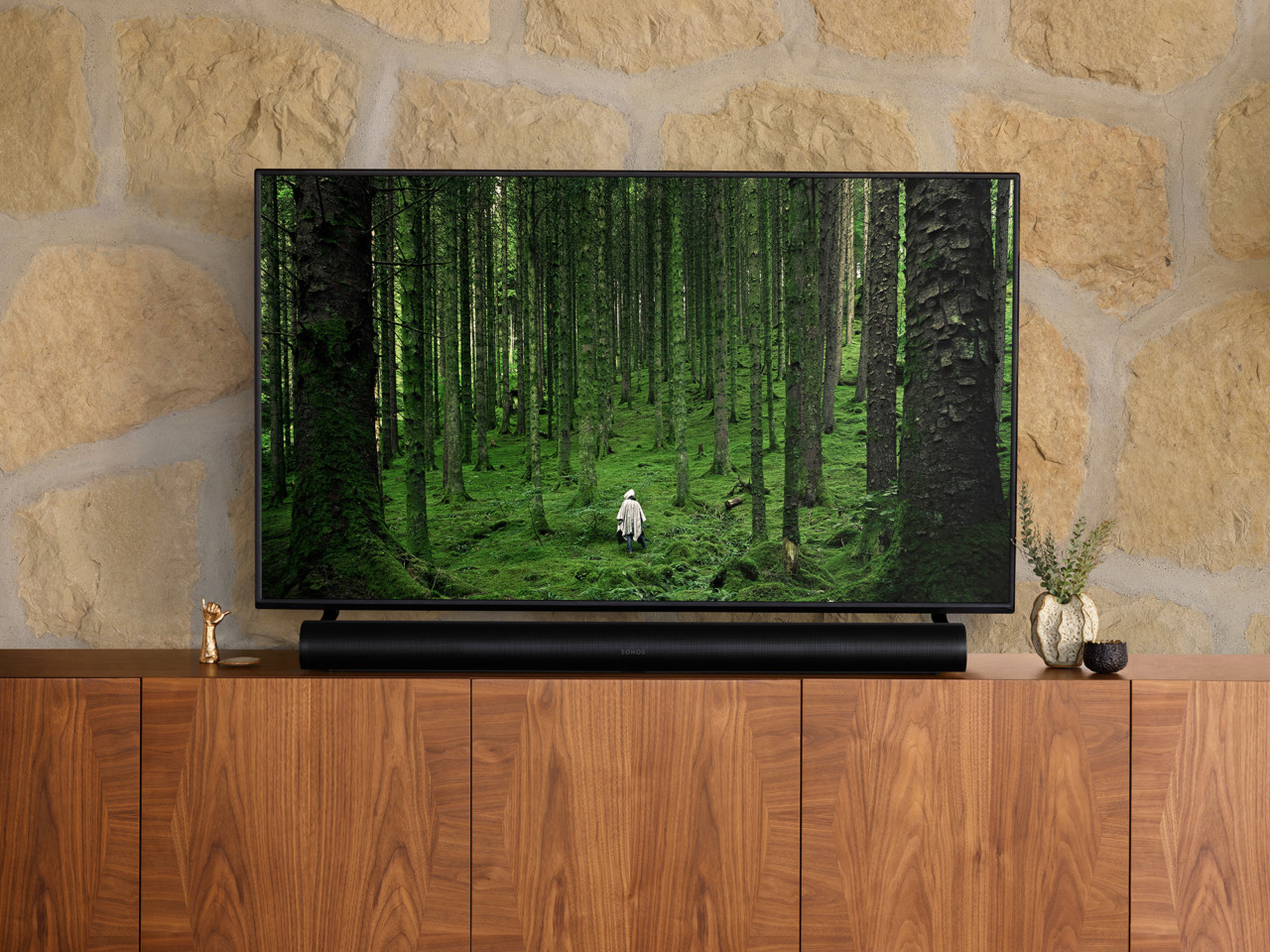 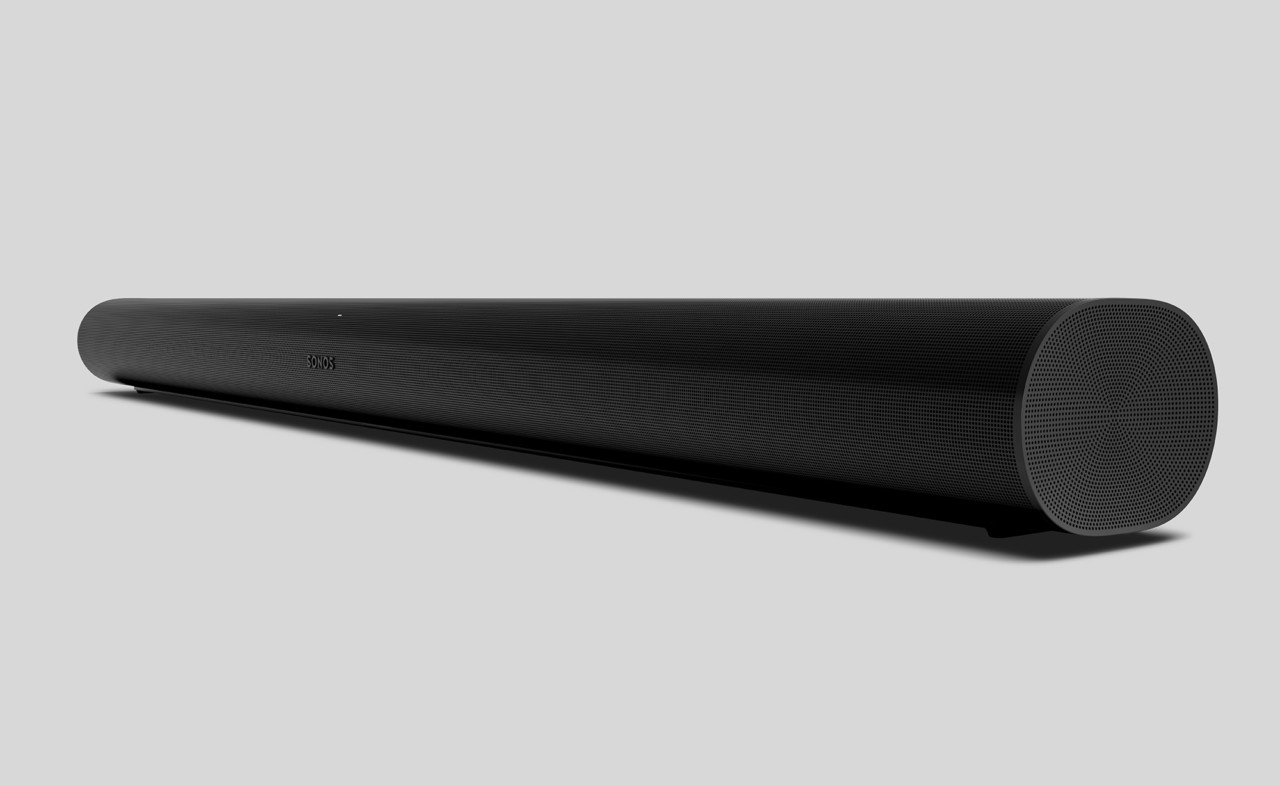 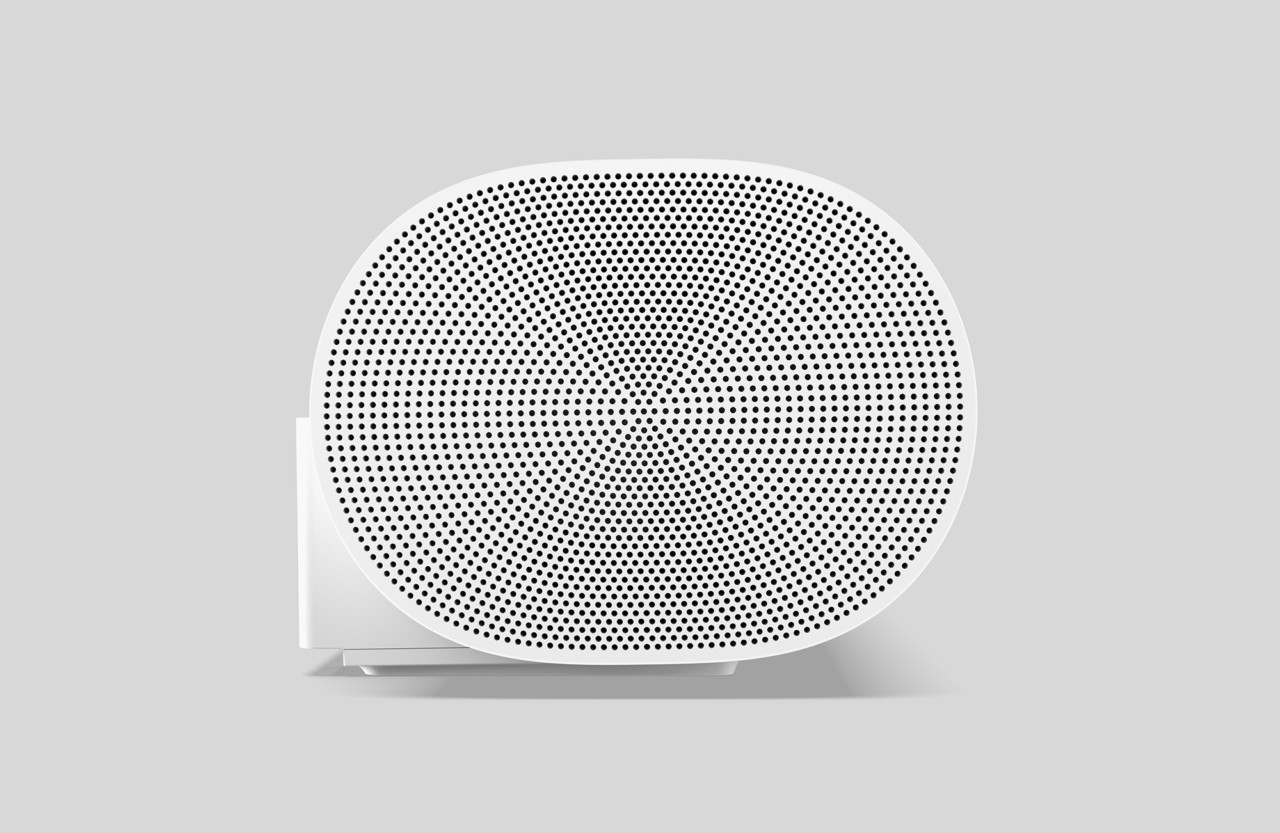 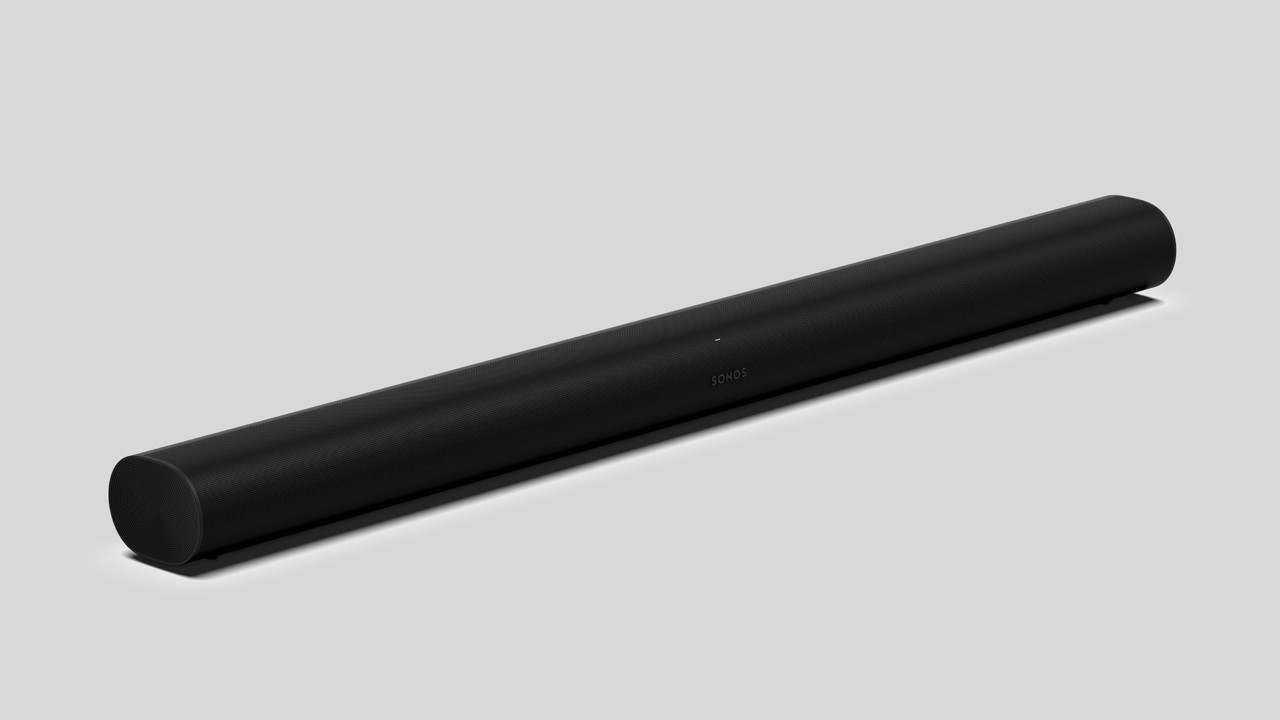 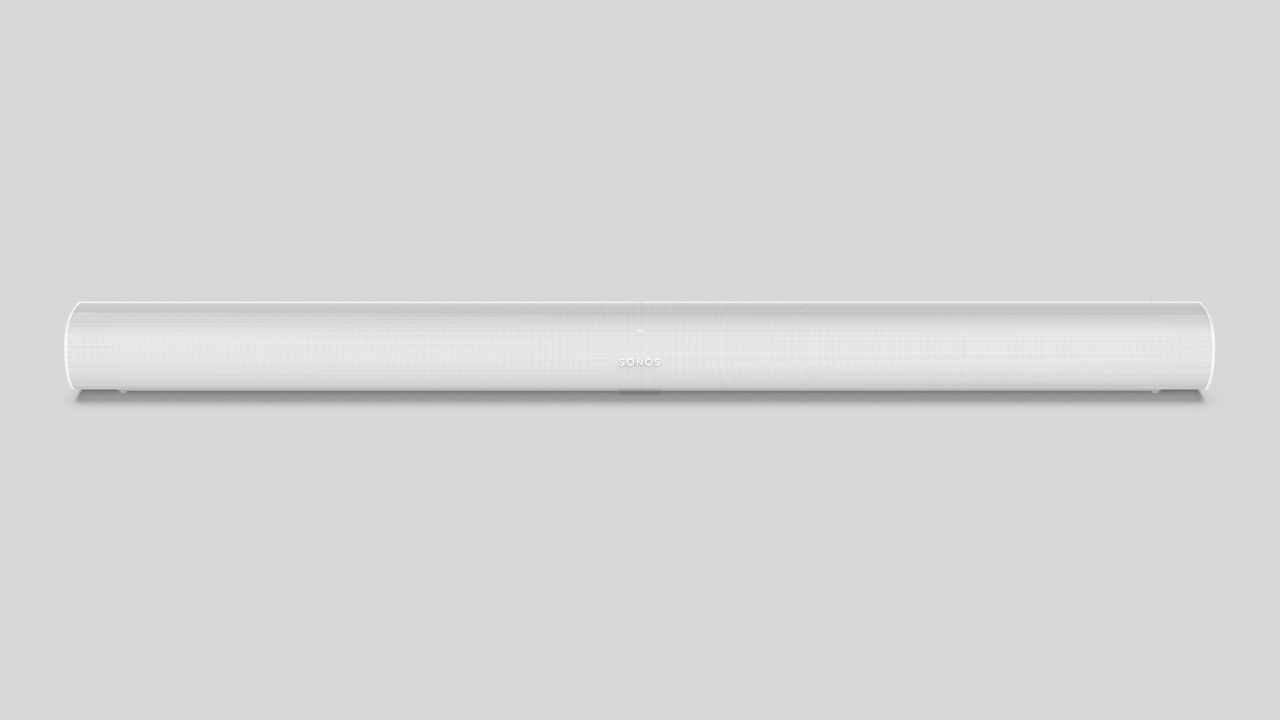 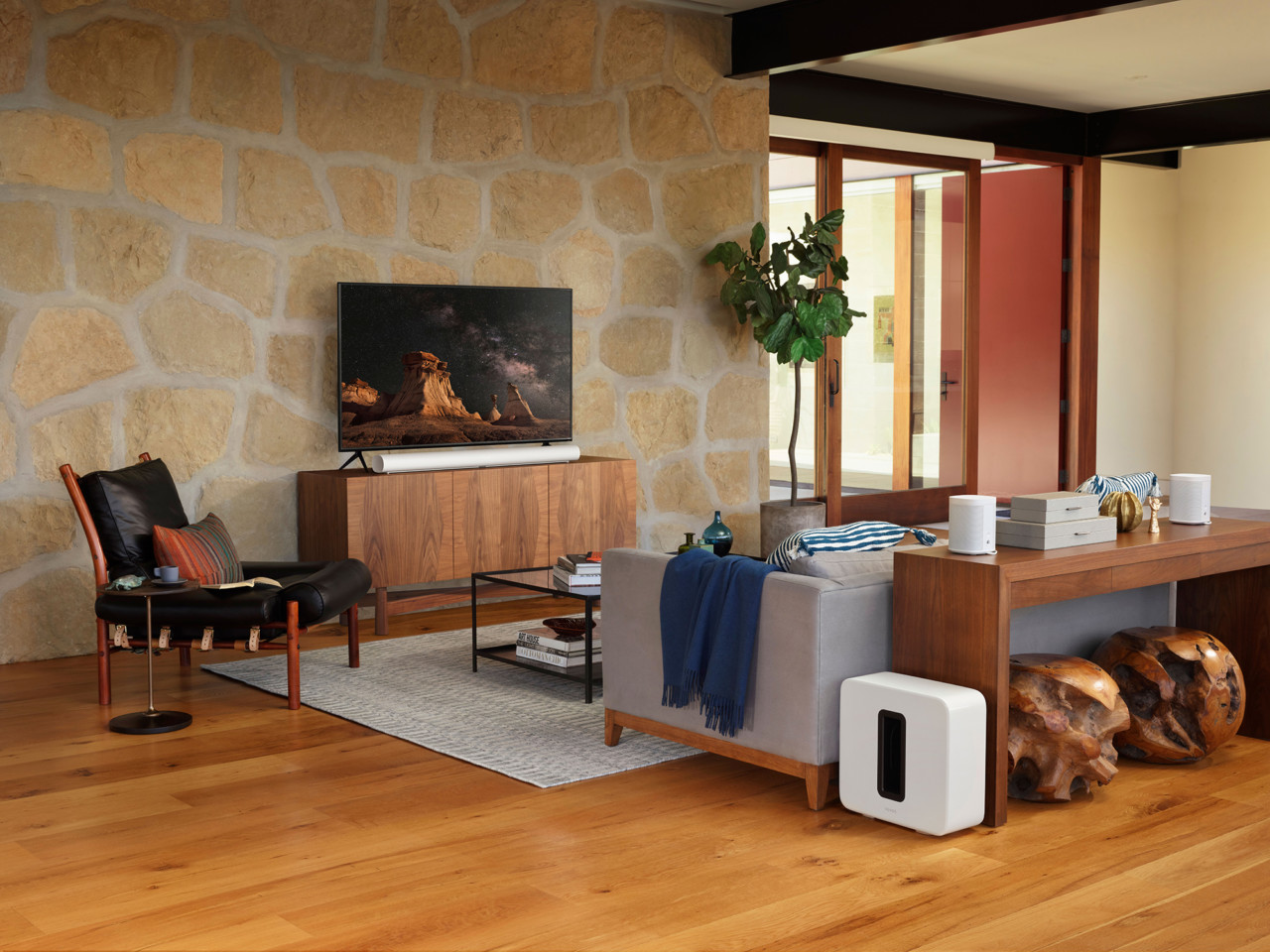 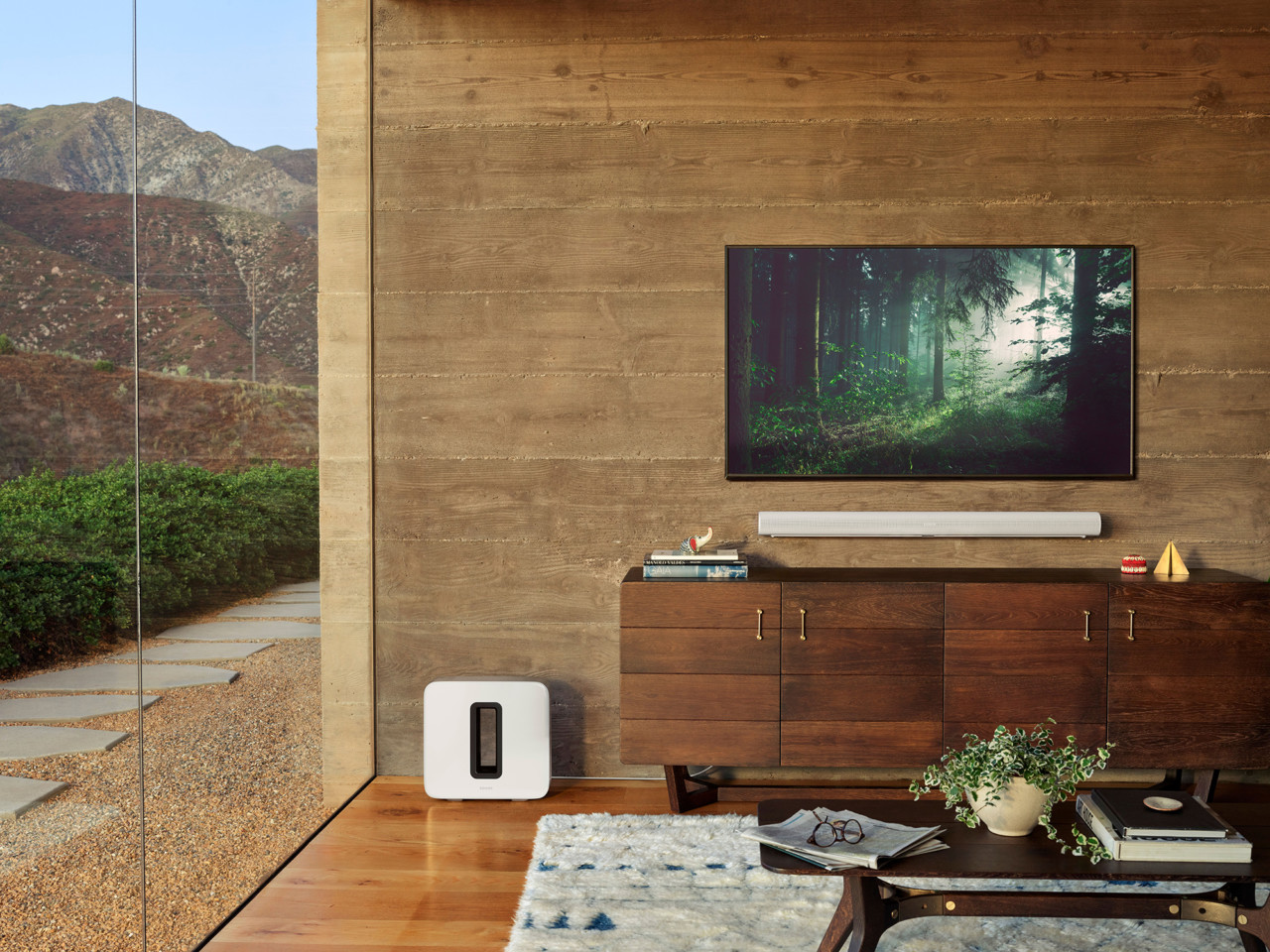 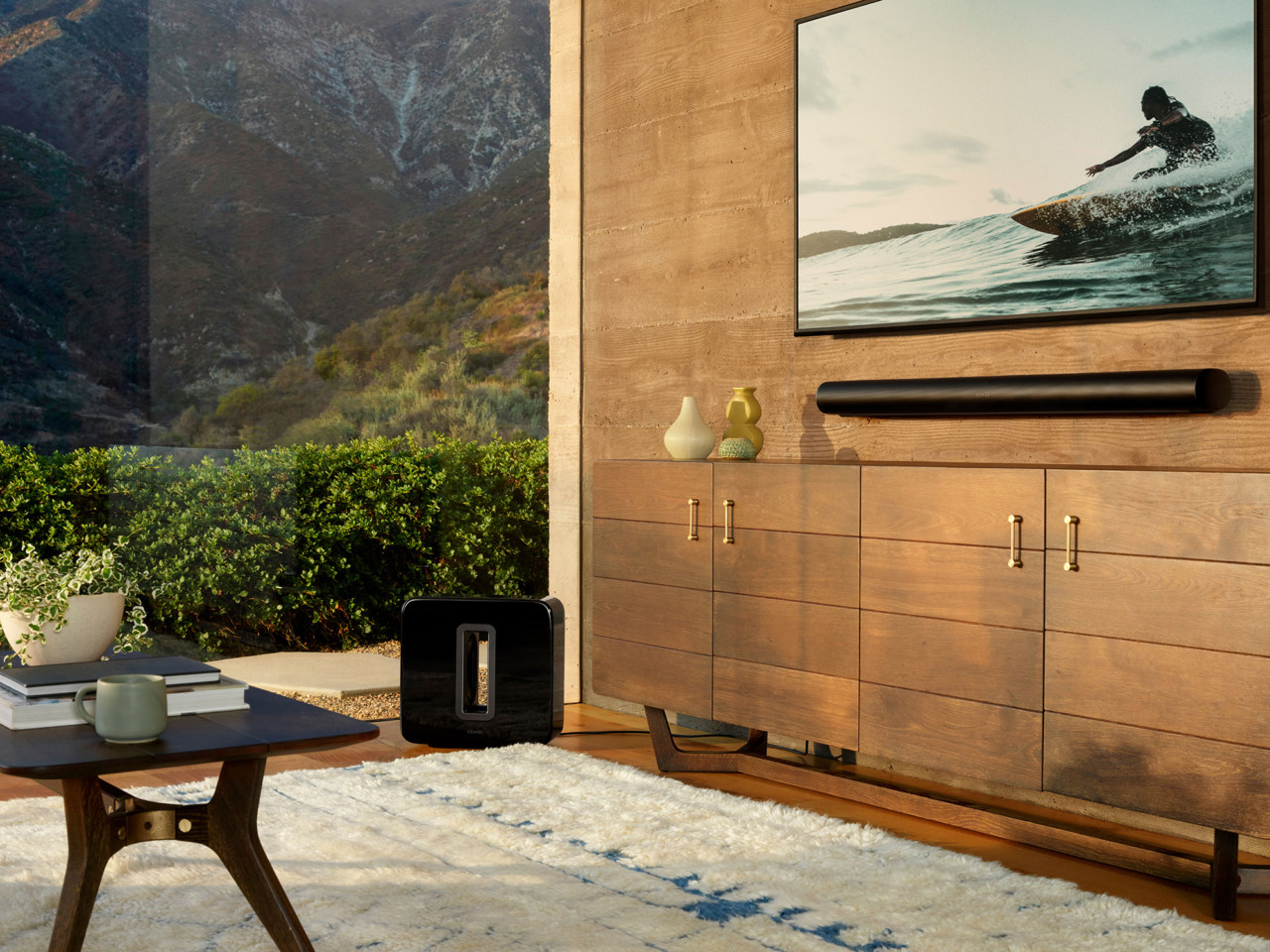 Sonos is taking aim at our ceilings. And our walls. And even our floors. The Sonos Arc arrives as the company’s first foray in the multi-directional experience of Dolby Atmos audio, engineered to bounce sound off walls and the ceiling to conjure a three dimensional home theater performance – all housed within a meticulously designed soundbar sculpted to sit harmoniously alongside larger televisions. 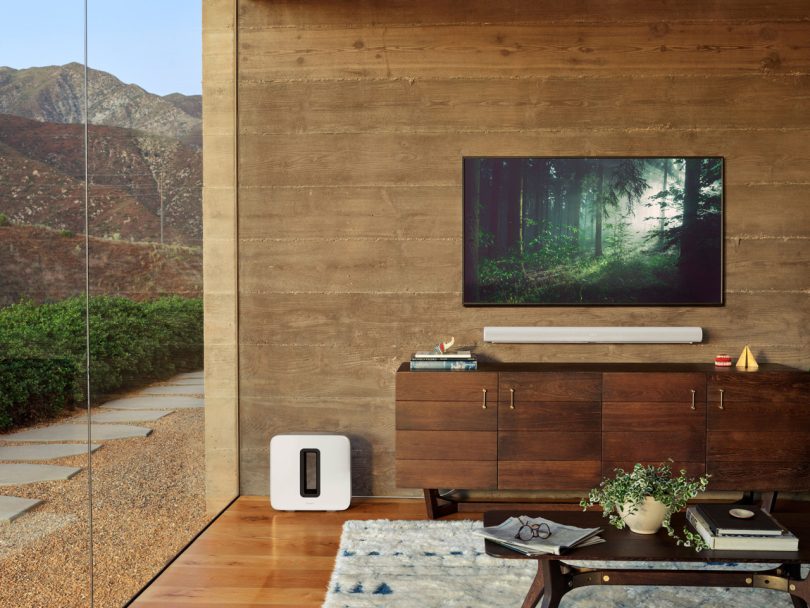 Aesthetically the Sonos Arc is intended as a sedate and subtle complement for television sets 65-inches and larger, one considerably more affordable and less conspicuous than other Atmos soundbars like the Bang & Olufsen Beosound Stage, partially attributed to the Arc’s use of polycarbonate plastic versus the more premium aluminum, oak wood, and fabric front construction of the Stage.

Nevertheless, the matte Sonos Arc’s ovoid 270-degree curved grill is handsomely minimalist (available in either black or white finishes), an expression shaped to be equally at home sitting on top of furniture or wall-mounted. In essence, the Sonos Arc proposes a home theater solution for people whose inclinations lean toward tastefully inconspicuous technology that operates adaptively. The Sonos team made effort to point out various details that make the Arc as minimally intrusive while being used to enjoy movies or television, or when the lights are low and the music turnt up. Thus the Sonos badge has been muted to a barely perceptible presence now compared to previous models, and an ambient light sensor dims the LEDs when the lights have been turned off. 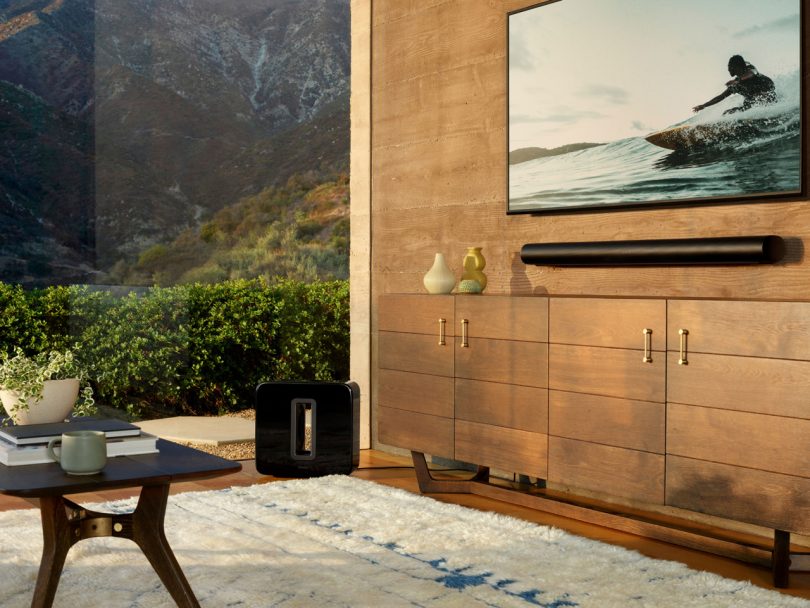 The Arc’s expanded length is attributed in accommodating eleven drivers and a four far-field microphone array; Sonos also cites an aesthetic reasoning behind stretching the Arc nearly 20″ wider than its smaller counterpart, the Beam soundbar: to visually blend in with larger television sets. 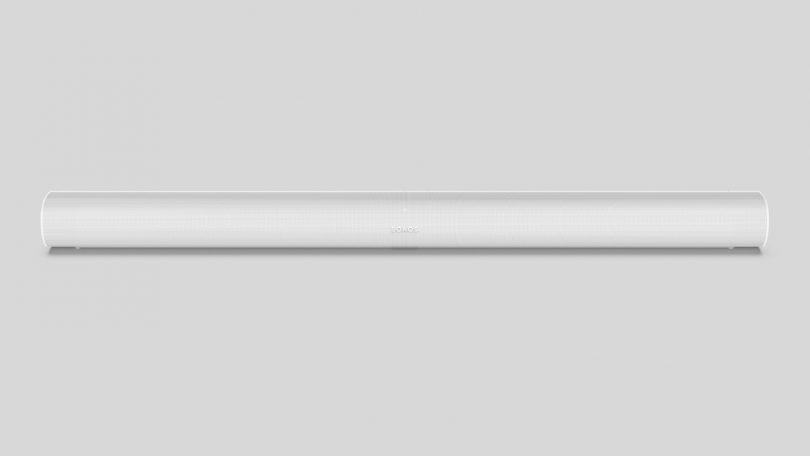 While the Arc’s design is likely to appease those looking for a minimally intrusive solution for home theater audio, its most noteworthy feature is one that must be heard to be appreciated. All 45-inches of the Arc’s length is packed with components intended to fool the ear into believing there are more speakers in the room than a single soundbar; this sorcery of sound is made possible with the inclusion of eleven drivers, each working to reproduce an immersive spatial “around-the-head” experience simulating the movie theater experience of Dolby Atmos technology (with Atmos mixed media sources). Normally this would require separate in-ceiling, down-firing speakers, but Sonos uses two up-facing drivers for this purpose to literally bounce a tightly focused beam-forming array accurately toward the listener’s ears for similar effect.

Sonos engineers paired hardware and software to give the Arc the ability to calculate the unique dimensional and spatial properties, including ceiling distance and the angles of a space, to maximize their immersive Atmos effect. Graphic: Sonos 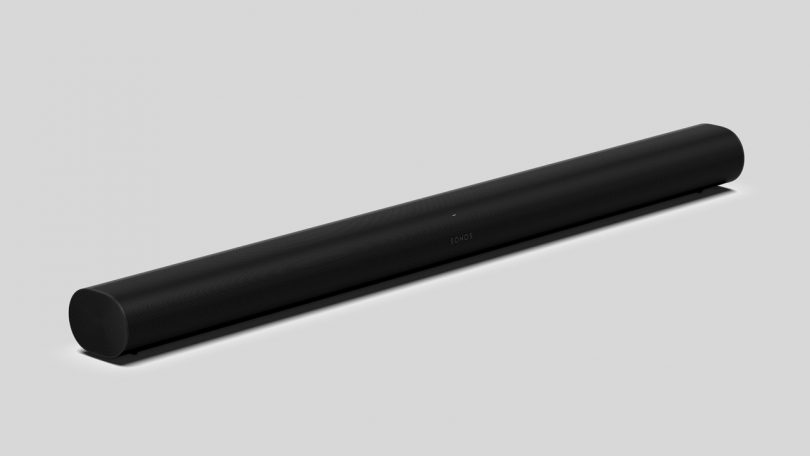 The Arc can be used to listen to nearly any source with discernible nuanced detail when paired with Dolby Atmos compatible players/streaming boxes (alongside an Atmos signal from the likes of Netflix, Amazon Prime Video, Apple TV, or Disney+). In instances where the Arc is used to listen to music sources, like the recently launched free streaming service Sonos Radio, the two up-firing speakers switch to emphasize low-end frequencies to broaden the soundfield. 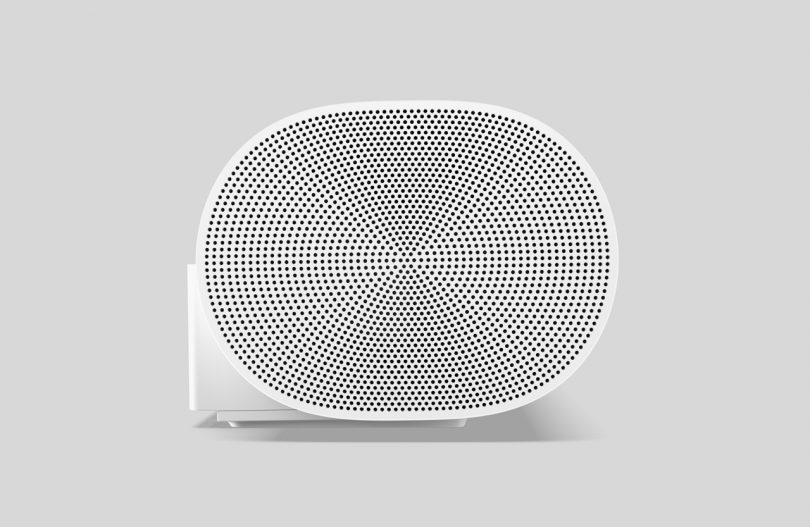 Within its 45-inch length is housed an arsenal of eight elliptical woofers, three silk-dome tweeters, and eleven Class-D digital amplifiers all dressed beneath 76,000 perfectly perforated holes drilled across the majority the housing surface, including at both ends. 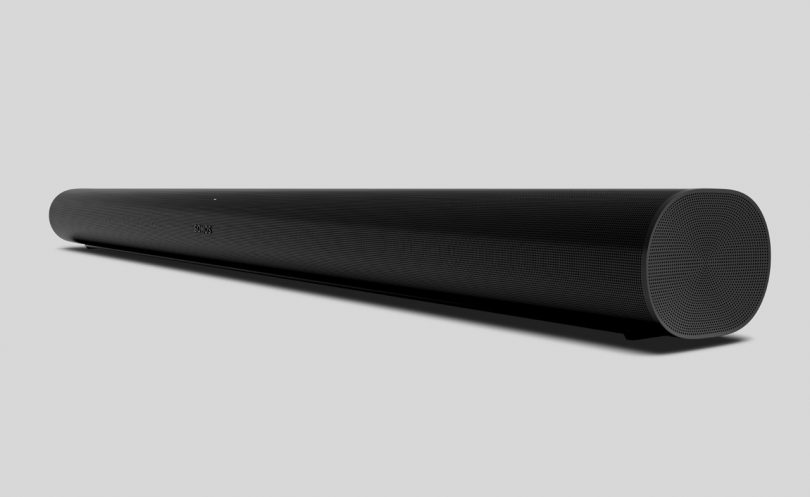 In comparison to the hyphenated Beam, the Arc is an elongated em dash is intended to sit under larger televisions connected via an eARC or ARC HDMI port. An array of built-in microphones also allows for hands-free voice controls calling up the services of Amazon Alexa or Google Assistant. 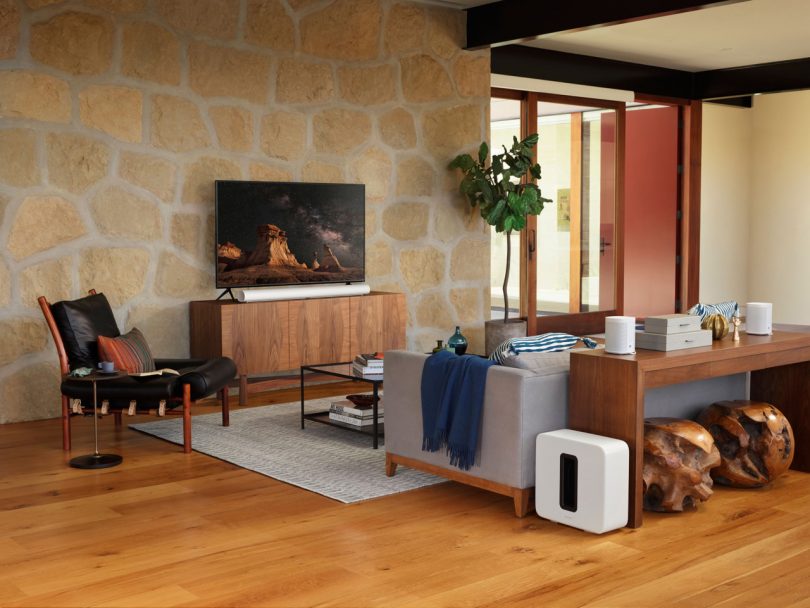 One can also add the recently updated Sub to hand off the low end duties to a discrete subwoofer, alongside the option to add rear sound speakers from the Sonos catalog to further widen the soundfield.

For the majority of home theater systems, the Arc offers a fine compromise minimizing the physical space and total componentry required to create what Sonos describes as 5.0.2 sound (left, center, right and left surround, and right surround complemented by two height channels for Dolby Atmos content), undoubtedly a tremendous upgrade from any built-in television speaker.