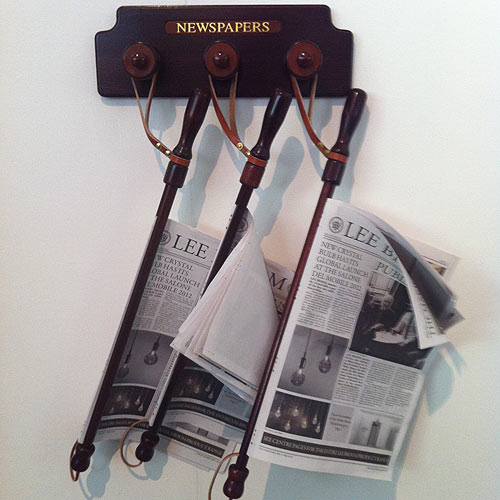 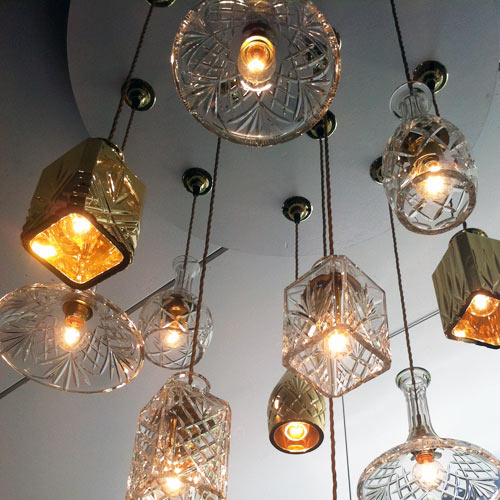 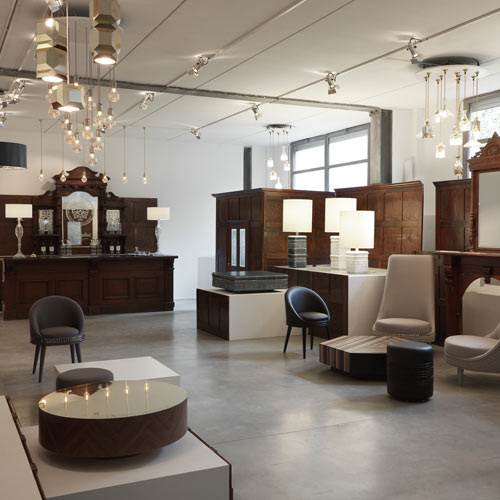 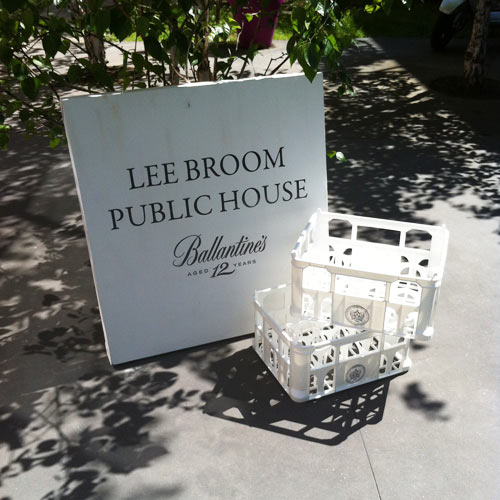 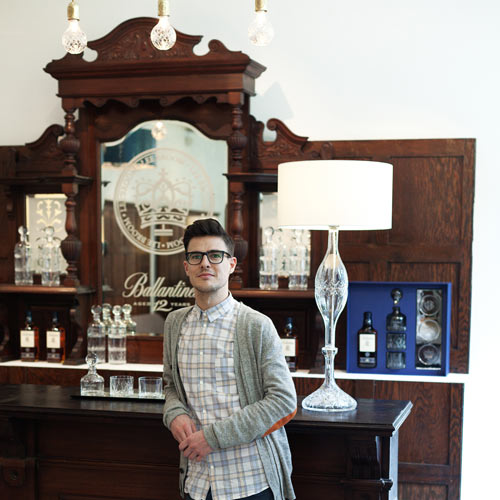 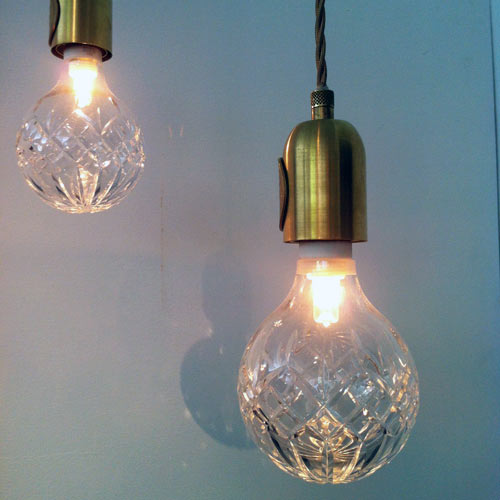 Public House was Lee Broom’s first solo exhibition and marked the fifth anniversary of the brand. It pulled together an almost complete range of his products – certainly more than even he had seen in one place before.

What more fitting backdrop could there be for an all-British brand than an old British boozer? The materials used for the exhibition: oak paneling, etched glass mirrors and an ornate wooden bar, were all reclaimed from pubs. In fact the atmosphere was so well constructed, on some of the rowdier nights, Lee had to remind people they weren’t actually in a pub!

I grabbed a few minutes with the man himself…

What’s the most important thing to know about you?

Oooh – it’s a good job I had that coffee and croissant before you came, isn’t it?! [long pause] I’ve got loads of things running through my head…!

And if people meet me, hopefully they will say I’m polite, I like manners.

I take life seriously, but you’ve got to try and enjoy the journey as well. It’s a bit of challenge sometimes, especially with an industry like this when you’re constantly focused on goals. It’s easy to forget the journey that you’re on — and my partner tries to remind me of that constantly and will say, “You’re in Milan – enjoy it!”

You’ve got quite a different aesthetic to a lot of your contemporaries. What would you say your key influences are?

It’s interesting that you say that, because I don’t ever think of my work in that way. It sounds a bit simplistic, but I have an idea and I just produce it.

But I think in terms of influences, I do tend to look to the past. I’m not trying to reinvent the wheel with design; I’m just trying to make people look at things in a different way. I like that notion that somebody looks at a piece of work that you’ve designed, and sort of says “I’ve seen that before, but not quite in that way.”

I see things that have been produced in the past, whether it’s furniture, or architecture or fashion, and I see other things within that, or I can put two things together and create something new.

With so many traditional references, and drawing on the past as much as you do, how do you keep it modern?

You’ve got to wear your “contemporary goggles” all the time! That’s very challenging, because it would be very easy to keep everything traditional, and I’m always there with a little stick; “keep it contemporary!” You’ve got to keep it modern.

I think there are some of my pieces that are more traditional than others, for instance, the Park Life collection for DeadGood, or the One Light Only collection to me looks very modern — it’s just how you place them.

Your work sometimes seems more connected to fashion than to design – would you agree with that?

Again, it feels very natural. I studied fashion, I worked at Vivienne Westwood, so when you’ve had that sort of background and that sort of training it’s a subconscious thing. I’m far more likely to read a fashion magazine than an interiors magazine. Firstly, it’s a break, and secondly, I don’t want to be too influenced by what other people are doing.

I grew up in theater — I went to theater school, and I was working as an actor for ten years from the age of seven to 17, so I guess that’s where some of the more theatrical influences step into some of my work or the presentation. When I’m designing I don’t just see the product — I see the entire thing; the space, the atmosphere, the music, just everything at the show I guess.

What’s interesting about fashion, or where it’s particularly influenced me, is that traditionally in fashion design you create a collection each season, and then with each season you change the look but you have an overarching style. You experiment with new materials, new finishes, new fabrics; I try to do that with my product design. I don’t want to do the same thing over and over again. So, if I haven’t done an upholstery collection, I’ll do an upholstery collection. If I’ve done something that’s very traditional looking, next season, I’ll probably want to do something that’s a bit more modern. I like new materials as well, which is always really challenging.

So, what made you want to work in product design and not in fashion design?

It was a pretty organic transition. While I was at Saint Martins I was giving interiors advice to bars and restaurants, because I used to do up my own flat and make my own frames, and I used to go to this local bar in Notting Hall and I would make curtains for them, and do paint effects and bits of upholstery. They opened more bars and I started doing more stuff, and then they eventually got me to do a full scheme for a big venue and it became really popular and won a couple of awards, and then I had a business! I was at that point still thinking, “I want to start my own fashion label,” and then I thought, “Well, I’ve got my own interiors label.” And then I made a conscious decision and I enjoyed it so much, so I thought I’m going to go into interiors, and then eventually I went into products after that.

What’s your favorite part of the job?

The design; the creating of something. Having the idea in your head and then the metamorphosis of that idea into a product.

What advice would give someone just starting out in design?

If you’re at university already, I suggest that you start promoting yourself while you’re there, and certainly if you’re going to want to work for yourself and get your products out there, you need to do it while you’re at college. Because universities spit all these designers out at exactly the same time so the competition is really fierce, so if you’re one step ahead of that, then I think you’re in a good position. That sort of happened to me, but unconsciously — I didn’t realize I was going to turn it into a business. So I think that’s important.

And also, just do your own thing, I think. It sounds a bit simplistic, but that’s what I’ve tried to do. I’ve started my own brand. It is hard work — you do have to become an entrepreneur as well as a designer. But it’s very rewarding.

I’m proud of the relationship I have with my partner.

White. It highlights everything. If you put [a white] lamp in any environment it will just work. It’s nice against a white wall, but if you put it against dark wood, it will look equally nice. You can highlight things with white. It tends to frame things really well.

As well as a new vintage Decanter Light in a new shape, a ship’s decanter, and the Salon Collection in some different finishes, Lee launched the Crystal Bulb at Milan.

All my products are made in Britain, and for this one we’re using Cumbria Crystal. They are the last manufacturer of lead crystal in the UK, and for this project they’ve hand-blown and hand-cut the lead crystal which we then turn into light bulbs. But in a way they’re not real light bulbs, because you can unscrew them and change the filament when it runs out, which will be after about two years.

Our trip to Milan was supported in part by Airbnb.com.