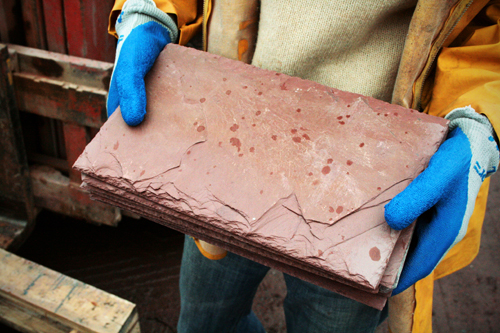 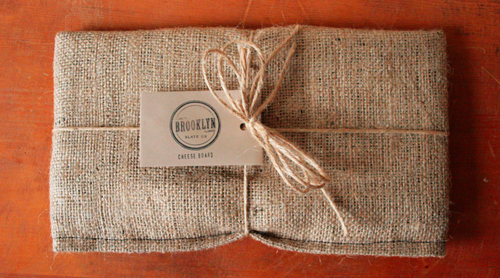 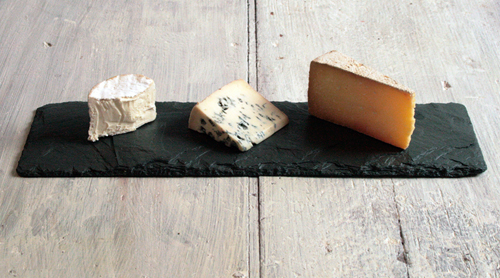 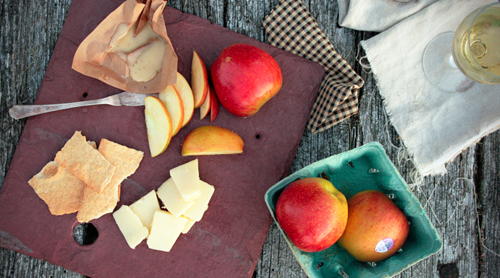 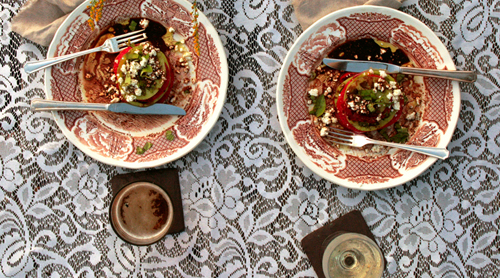 I’ve been thinking about it lately — that is — starting my own business. The idea came creeping around, knocking on the neighborhood of my life and settled itself down on my front doorstep. But with the echos of childhood lessons resounding, I didn’t allow the unfamiliar visitor to simply stride across my threshold — you never know what to expect from a stranger. Instead I called its references, one of which happened to be some pals over at Brooklyn Slate, a family-owned operation dedicated to producing high-quality slate serving ware.

Kristy Hadeka and Sean Tice, its polymathic founders, have been getting down to business for just under one year now, having arrived on the national food scene with unprecedented success. With Brooklyn Slate now listed among goods at Williams-Sonoma and Whole Foods, along with countless other boutiques and restaurants across the US and Canada, the rustic utility of their slate, quarried in upstate New York, is making an impression on foodies and hosts alike.

I shot them some questions during the New Year celebration, inquiring into their first-year lessons on starting a small business. They spoke to how the experience has informed them on success and limitation, their relationship, and the thriving world of local and sustainable goods.

What has starting Brooklyn Slate taught you about yourself? About each other?

Sean Tice: I’ve learned that I can actually function on only four hours of sleep. It’s exhausting but also a lot of fun — I enjoy the challenge.

Kristy Hadeka: When you run a small business you’re every department — sales, accounting, production, marketing, deliveries — and you need to toggle between each one pretty much on the fly. Multitasking like that, you have your breaking point, so we’ve learned to check each other so we don’t burn out too much.

What hard decisions have you had to make so far?

KH: As we’ve grown we’ve had to learn to let go. Up until this past summer, I was really focused on the manufacturing process. We began to hire our first employees to work on assembly, and I had to give up control and trust that they would do a good job. The reality is that you can’t assemble every single product yourself. You’ll actually hold your company back if you don’t walk away from day-to-day operations and focus instead on managing your product line and customers.

Deciding to work with larger stores was also tough decision. In the end both Williams-Sonoma and Whole Foods have been amazing — they respect the size of our operation and are really flexible. They make it work for us and have allowed us to maintain our goals and philosophies, but also enabled us to reach a much larger audience.

What has been your single biggest triumph?

KH: Probably getting into our first store. Before we began shopping our product, we spent a lot of time figuring out the packaging and branding — Sean had a logo and website created before we had a finalized product line. Our friends responded really well to the whole endeavor, so we hoped retailers would have a similar response.

We finally set out on a sales trip, which literally meant walking around Park Slope [Brooklyn] in the rain and knocking on retailers’ doors with our samples. Allen at Blue Apron Foods cut us off and ordered nine boards before we even finished our pitch. I think it was at that moment that we were floored by the realization that something we came up with could actually become very real.

What are your four favorite foods? (Each!)

What needs to happen for more people to start buying local?

KH: That’s a really tough question. Part of it is education — explaining the value behind a product and why something that’s locally produced is good for you, for the supply chain, and for local retailers.

ST: What’s hard to explain is the price point side of it. You can’t necessarily expect to sell someone a bottle of ketchup for $8 when they’re used to paying $3.99, but the reality is that manufacturing on a small level and using quality supplies to create your product drives the cost up. It takes compromise from both the producer and consumer to make the transaction viable. Local producers need to focus on maximizing value for their customers by driving costs down, and customers need to understand that the retail price of a corporate version of a product is unrealistic [for a] locally produced alternative.

ST: Right now we’re really focused on expanding distribution for our current product line. In the next month or so we’ll be making found pieces available on our site, which are reclaimed pieces of slate from old barn roofs and walls in upstate New York and Vermont. This spring we plan to manufacture a line of goods for gardening.

Check out this video about Brooklyn Slate:

You can follow Eleanor on . Read all of Eleanor's posts.